Microplastics Found in Human Blood for the First Time 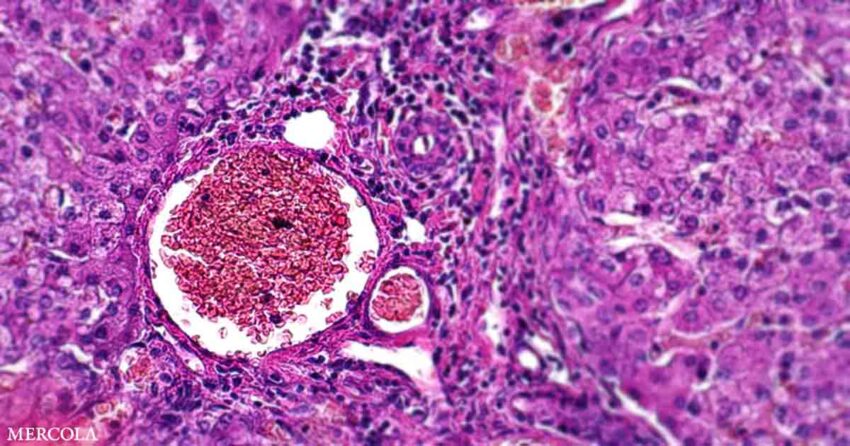 There’s a good chance that tiny pieces of plastic are not only in your body but floating in your bloodstream. The news came from researchers in The Netherlands, who analyzed blood samples from 22 healthy volunteers. It’s the first time microplastics have been detected in human blood, and according to study author professor Dick Vethaak, an ecotoxicologist at Vrije Universiteit Amsterdam in The Netherlands, “It is certainly reasonable to be concerned.”1

The fact is, plastic is a ubiquitous part of the modern-day world, integrally intertwined with our daily lives, from plastic food packaging and bottles to microbeads found in personal care products. It’s estimated that 11 million metric tons of plastic waste enter the world’s oceans annually — an amount that could nearly triple by 2040.2

Microplastics, which have no standard definition but are often defined as being less than 5 millimeters in length, are especially pernicious since they’re so small; exposure occurs via both inhalation and ingestion, and once in your body, they’re free to travel throughout and may even lodge in your organs.3

Your Blood May Be Polluted by Plastic

Some of the blood samples contained up to three different types of plastic; steel syringe needles and glass tubes were used so no plastic would be introduced to the samples.6 Accurate measurements of plastics in human blood will be important for conducting a human health risk assessment, or HRA, for plastic particle pollution, in order to determine the health consequences of plastics accumulating in the human body.

Previous studies have detected microsized plastic particles in human feces, providing evidence that such particles travel through the gastrointestinal tract. Plastic particles have also been found in colectomy specimens from humans as well as in human placental tissue.7

However, Vethaak told The Guardian, “Our study is the first indication that we have polymer particles in our blood — it’s a breakthrough result. But we have to extend the research and increase the sample sizes, the number of polymers assessed, etc.”8 Out of the 17 samples in which plastic particles were detected:9

What Happens to Plastic in Your Body?

It’s clear that many human bodies are carrying an unknown quantity of plastic particles. In a study by University of Newcastle, Australia, researchers quantified what microplastic exposure may mean for humans, revealing a shocking finding that the average person could be eating about 5 grams of plastic per week — about the amount found in one credit card.10

Such plastics have been found to damage human cells in the laboratory, but as the featured study researchers explained:11

“The fate of plastic particles in the bloodstream needs further study to answer questions regarding the potential accumulation in the general population and occupationally exposed workers, the environmental factors contributing to the internal exposure and toxicological and human health effects that may result from different exposure scenarios.”

They stated that it’s “scientifically plausible” that the plastic particles are being transported by the bloodstream to organs, based, for instance, on data showing that 50, 80 and 240 nm polystyrene beads and microsized polypropylene can permeate the human placenta.12 Animal studies also show a disturbing trend of plastic particles moving throughout the body.

In one study, pregnant rats were exposed, via the lungs, to 20 nm nanopolystyrene beads. Twenty-four hours later the particles were found in the mother’s lung, heart and spleen, while the plastics had also migrated to the placenta and fetal liver, lungs, heart, kidney and brain.13 Reduced fetal and placental weight were also observed, and it’s possible that the exposures could “initiate developmental onset of disease” within the fetus:14

In another example, mice were exposed, orally, to polystyrene microplastic for five weeks. Weights of the body, liver and lipids declined, while secretion of mucin in the gut was also reduced, suggesting the plastics led to gut microbiota dysbiosis. The plastic exposure also induced haptic lipid metabolism disorder in the mice, and the particles were detected in the liver, kidney and gut.15

Cardiovascular toxicity has also been demonstrated in rats, where polystyrene microplastics could lead to cardiac fibrosis and dysfunction, possibly by inducing oxidative stress and apoptosis of myocardium, the muscular layer of the heart.16

The cumulative exposure to microplastics alongside other environmental pollutants must also be considered. When mice were exposed to both microplastics and organophosphorus flame retardants — another ubiquitous toxin — greater oxidative stress and neurotoxicity were found. The co-exposure also enhanced the disruption of amino acid metabolism and energy metabolism in the mice.17

You’re Exposed to Plastics in Food, Water and Air

The plastic particles found in the bloodstream represent that from all potential exposure routes, researchers explained in Environment International. This includes:18

It’s believed that most plastic particles enter the human bloodstream after being ingested or inhaled, rather than via absorption through the skin:19

“Airborne particles between 1 nm and 20 µm are considered respirable. Ultrafine (<0.1 µm) inhaled particles may become absorbed and accumulate in the lung, while most larger particles are expected to be coughed up and eventually swallowed, and have a second chance of absorption via the gut epithelium.”

Microplastics are particularly well known to accumulate in seafood intended for human consumption. In a study of fish markets in California and Indonesia, one-quarter of the fish were found to have plastics in their guts.20 Plastics and other man-made debris were also found in 33% of shellfish sampled.21

In a study of freshwater environments, 83% of the fish also had plastic debris in their gut, mostly microplastics, including microfibers.22 Beer, tap water and sea salt are other known offenders, with measurable quantities of microplastics detected.

“Based on consumer guidelines, our results indicate the average person ingests over 5,800 particles of synthetic debris from these three sources annually, with the largest contribution coming from tap water (88 percent),” according to researchers in PLOS One.23

To get an idea of the scale of the problem, it’s estimated that 11 billion tons of plastic will accumulate in the environment by 2025.24 As they slowly break down, tiny fragmented pieces are swept up by wind and rain, where they’re transported across the world.

According to Utah State University researchers and colleagues, more than 1,000 tons of microplastic particles fall from wind and rain into protected areas — such as national parks — in the southern and central western U.S. each year.25 This breaks down to average deposition rates of 132 plastics per square meter per day.26

Could Plastics Affect the Immune System?

The health effects of microplastics are only beginning to be understood. In addition to their direct risks are those posed by the environmental chemicals they carry. Plastics are known to absorb endocrine-disrupting chemicals and carcinogens from ocean water, for instance. In fact, plastics may concentrate toxins, such that they’re found at levels up to 1 million times those found in the surrounding seawater.27

Such chemicals, which accumulate over decades, have been linked to health problems including altered growth, reduced fertility and developmental and reproductive harm.

“We’re not supposed to breathe in this material,” Steve Allen, a microplastics researcher with the University of Strathclyde in Scotland, told Scientific American.28 “[Plastics in the environment] carry all sorts of pesticides, heavy metals and all the other chemicals that we’ve made over time. They’re going to carry them directly into our lungs.”

As Frederick vom Saal, a distinguished professor emeritus of biological sciences at the University of Missouri, told Time:30

“In animal models and in epidemiological studies in humans, we have a correlation between plastic exposures and known health hazards … They’re implicated in the obesity epidemic and in other metabolic diseases such as diabetes and heart disease, as well as cancer and reproductive problems and neural problems like attention deficit disorder.

If you look at the trendlines of non-communicable diseases around the world, you see there is a correlation between exposure to these [plastic] pollutants.”

There’s also concern that plastics could be interacting with the human immune system in unknown ways. The Environment International researchers explained:31

“[A]t least some of the plastic particles humans come in contact with can be bioavailable and … the rate of elimination via e.g. the biliary tract, kidney or transfer to and deposition in organs is slower than the rate of absorption into the blood.

… It remains to be determined whether plastic particles are present in the plasma or are carried by specific cell types (and to which extent such cells may be involved in translocating plastic particles across mucosa to the bloodstream).

If plastic particles present in the bloodstream are indeed being carried by immune cells, the question also arises, can such exposures potentially affect immune regulation or the predisposition to diseases with an immunological base?”

Reducing Your Exposure to Plastic Pollution

Ultimately, plastic pollution needs to be curbed at its source, but you can help reduce your exposure by becoming conscious of the plastic you’re using daily — and cut back where you can. Some steps are easy, like swapping plastic bags, bottles, straws, utensils and food containers for more durable, reusable options.

Other steps may take more thought, like reconsidering what types of clothes to buy. In a comparison of acrylic, polyester and a polyester-cotton blend, acrylic was the worst, shedding microfibers up to four times faster than the polyester-cotton blend.32 Also pay attention when you’re at the supermarket, choosing food items that are free of plastic packaging as much as possible.

Eating a whole food diet lends itself to minimal plastic packaging, but be careful to avoid plastic-wrapped produce as well. Following are some additional straightforward steps you can take to cut down on plastics usage in your life. Share them with a friend or two and the positive impacts will only continue to be magnified: