Big Pharma Advertising Dollars Are at an All-Time High 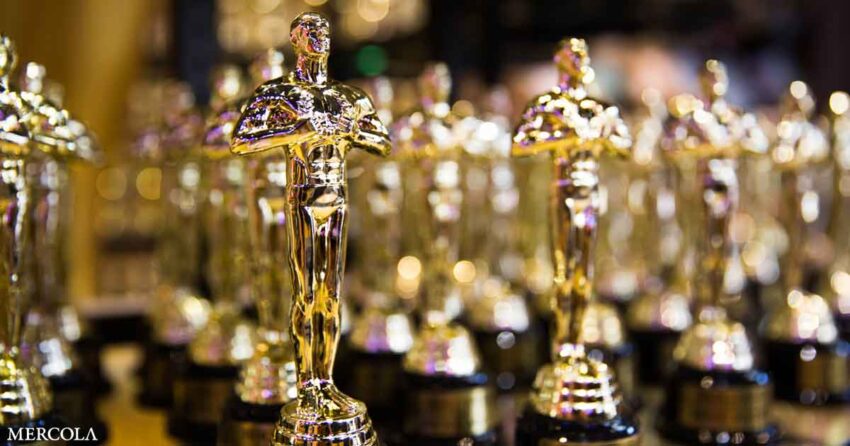 How do you control major media? The short answer — illustrated in the video above — is: through advertising dollars. Big Pharma advertising dominates, making up a large portion of a given media outlet’s revenue, and that funding gives Pharma the power to dictate what ends up in the news and what doesn’t.

While Big Pharma has frequently spent more on advertising than on research and development, over the past couple of years, ad spending has increased to new heights.1

In 2021, drug companies spent an aggregate $6.88 BILLION on direct-to-consumer advertising (DCTA), up slightly from $6.86 billion in 2020.2 And, remember, DCTA is only permitted in two countries in the world, the U.S. and New Zealand, so media tend to be particularly biased in favor of Big Pharma those two countries.

Did Will Smith Smack Chris Rock on Behalf of Sponsors?

Pfizer, Novartis, Eli Lilly, Incyte and Exact Sciences even sponsored the 2022 Academy Awards, which was “an unusual turn for the industry,” according to some biopharma professionals.3 Chances are you heard about how Will Smith smacked Chris Rock across the face. Smith supposedly took offense over a comment about his wife’s lack of hair.

Jada Pinkett Smith has alopecia areata, which is believed to be an autoimmune disorder. Isn’t it amazing, then, that Pfizer, a primary sponsor of this year’s Oscars,4 is working on an alopecia drug? They announced “top-line results” from a Phase 2b/3 trial in August 2021.5

It’s especially curious since three of the other sponsors — Eli Lilly, Incyte (partnering with Lilly) and Novartis — also have alopecia drugs nearly ready to go.6,7,8 Coincidence? Or a cleverly disguised publicity stunt for soon-to-be-released drugs? If the latter, it would put a whole new spin on the concept of subliminal advertising.

Taxpayer Money Used to Advertise Most Dangerous Drug Ever

Even more egregiously, over the past year, the U.S. government used your tax dollars to advertise the COVID jab, which is the most dangerous and least proven drug ever marketed in the history of the world. How do we know this? Well, there’s:

So, the U.S. government purchased favorable media coverage for a novel and poorly tested gene transfer injection that is now killing and disabling hundreds of thousands of Americans, while simultaneously calling for the censorship of anyone who dared to address the risks of this novel treatment.

In all, the U.S. government spent $1 BILLION of U.S. taxpayers’ dollars to ‘strengthen vaccine confidence in the United States’ and ‘combat misinformation about vaccines,’ all with ‘the goal of increasing rates of vaccination across all ages.’

As reported by The Blaze:16

“In response to a FOIA request filed by TheBlaze, HHS [Health and Human Services] revealed that it purchased advertising from major news networks including:

The Biden administration purchased ads on TV, radio, in print, and on social media to build vaccine confidence, timing this effort with the increasing availability of the vaccines … Though virtually all of these newsrooms produced stories covering the COVID-19 vaccines, the taxpayer dollars flowing to their companies were not disclosed to audiences …”

In all, the U.S. government spent $1 BILLION of U.S. taxpayers’ dollars to “strengthen vaccine confidence in the United States” and “combat misinformation about vaccines,” all with “the goal of increasing rates of vaccination across all ages.” Government also collaborated with celebrities, social media influencers and “expert” interviewees such as Dr. Anthony Fauci. As noted by The Daily Exposé:17

“In other words, Fauci, the man who has been the ‘face’ of COVID-19 in 2020 and 2021, who publicly disparaged anyone who questioned the data he was using to support his recommendations, and who blithely referred to himself as ‘the science,’ was, in fact, a shill.”

The Level of Manipulation of Information Is Immense

While newsrooms claim to be completely independent from the advertising department, history and the personal experience of insiders tells us this simply isn’t true.

Take Sharyl Attkisson, for example, a five-time Emmy Award-winning network anchor, producer and reporter whose television career spans more than three decades. In 2009, she blew the lid off the swine flu media hype, showing the hysteria was manufactured and completely unfounded.

In 2014, she wrote “Stonewalled: My Fight for Truth Against the Forces of Obstruction, Intimidation, and Harassment in Obama’s Washington.” It’s a tell-all exposé on what really goes on behind the media curtain, and it’s not pretty. The extent to which information is manipulated is far greater than most people suspect, and this is particularly true when it comes to COVID.

Years before the pandemic, Attkisson explained how false “consensus” was being created: Let’s say you hear about a new drug for an ailment you have, and you decide to do your own due diligence. Ultimately, you conclude it is safe and effective because everywhere you look, the information seems to support this conclusion. You feel good knowing you’ve done your homework, and fill the prescription. But what you don’t know is that:

In short, the “consensus” you see has been cleverly manufactured by the most effective propaganda campaign in the history of the world, in an effort to convince you of what the corporate cartels want you to conclude at the end of doing “your own research.” This way, they can sell you more of their expensive and dangerous products.

Over the past two years, this manipulation has become far more obvious and easy for people to see. Before the pandemic, it was pretty well disguised. Today, most can rattle off dozens of examples of how COVID information was manipulated and controlled, through the examples above and others, both by Big Pharma and the U.S. government.

Government Media Manipulation Has Been Routine for Years

For years, the U.S. government, regulatory agencies and public health organizations have colluded with media to control what gets reported and what doesn’t. This, too, is something that has become blatantly obvious during this pandemic, but it’s not a new phenomenon.

For example, back in 2016, a Scientific American investigation revealed how the U.S. Food and Drug Administration routinely manipulated mainstream media, stripping them of their independence:18

“It was a Faustian bargain … The deal was this: NPR, along with a select group of media outlets, would get a briefing about an upcoming announcement by the U.S. Food and Drug Administration a day before anyone else.

But in exchange for the scoop, NPR would have to abandon its reportorial independence. The FDA would dictate whom NPR’s reporter could and couldn’t interview … NPR reporter Rob Stein wrote back to the government officials offering the deal. Stein asked for a little bit of leeway to do some independent reporting but was turned down flat. Take the deal or leave it.”

As it turns out, NPR accepted the deal and Stein joined reporters from a dozen other media organizations to get the scoop. “Every single journalist present had agreed not to ask any questions of sources not approved by the government until given the go-ahead,” Scientific American wrote.

Considering the U.S. government’s many power grabs over the past two years, there’s no reason to assume it hasn’t been using this kind of manipulation to control media coverage of COVID-19 and the injections. Bill Gates, whose influence rivals that of nation states through his funding of the World Health Organization, has also poured hundreds of millions of dollars into the COVID campaign. As reported by The Daily Exposé:19

“Using more than 30,000 grants, Gates has contributed at least $319 million to the media … Recipients included CNN, NPR, BBC, The Atlantic and PBS. Gates has also sponsored foreign organizations that included The Daily Telegraph, the Financial Times, and Al Jazeera. More than $38 million has also been funneled into investigative journalism centers.

Gates’ influence within the press is far-reaching, from journalism to journalistic training. This ultimately makes true objective reporting about Gates or his initiatives virtually impossible.”

In 2006, experts warned that DTCA could trigger “placebo effects” and result in “negative economic, social and political consequences,”20 and in 2011, an article in Pharmacy and Therapeutics noted that the rules governing drug ads to the public were “too relaxed and inadequately enforced.”21

As reported by Forbes in 2019,22 “While DTCA has some positive effects, these commercials tend to mislead patients and can result in the breakdown of the doctor-patient relationship … According to an FDA survey, 65% of physicians said that DTCA for drugs sent confusing messages to the patients …” Importantly, drug ads must:23

Have you ever seen an ad for the COVID jab that held true to these four requirements? I can’t think of one. People who have been injured by the COVID jab are now also starting to speak out, saying they feel betrayed and misled, as they were never told about the potential dangers of the shot.

One excellent example is the Substack writer Joomi’s story, “I Was Deceived About COVID Vaccine Safety.”24 Has mainstream media become too corrupted to serve its intended function? I believe so. At bare minimum, the likelihood of getting the truth on anything related to government or health, specifically, is virtually nil these days.