This Nighttime Mistake Can Make Your Bones Age Faster 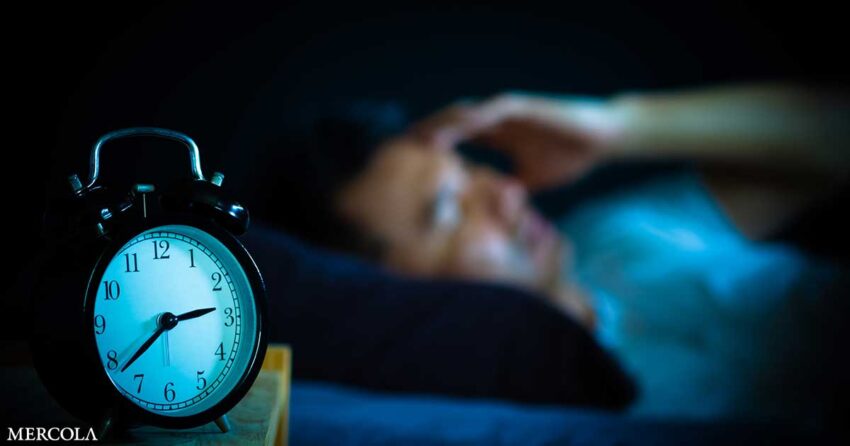 This article was previously published December 12, 2019, and has been updated with new information.

Far from being a waste of time, sleep is required for the maintenance of metabolic and biological homeostasis in your body. Without proper sleep, you become more prone to chronic illness of all kinds — including diabetes,1 heart disease,2 neurodegeneration3 and cancer.4

According to research, lack of sleep can even impact your bone density and risk of osteoporosis (brittle bone), a condition that affects an estimated 10.3% of U.S. adults over the age of 50.5 With osteoporosis also comes the risk of bone fractures due to a fall, and hip fractures in particular are notorious for raising an older individual’s risk of death.6

An estimated 43.4 million older Americans also have low bone density,7 known as osteopenia, which raises your risk of fractures and may progress into osteoporosis.

While a number of nonmodifiable factors can influence your risk of osteoporosis, such as age, sex, ethnicity, family history and menopause, there are also modifiable risk factors over which you have a significant degree of control.

These include diet, sun exposure to optimize your vitamin D level, smoking, exercise, alcohol consumption and use of certain medicines.8 To this list we can now also add sleep.

A study,9,10,11 published in the November 2019 issue of the Journal of Bone and Mineral Research, which looked at postmenopausal women from the Women’s Health Initiative, found intriguing correlations between sleep duration and bone density.

Women who reported sleeping only five hours or less per night had, on average, 0.012 to 0.018 g/cm2 lower bone mineral density than those who slept seven hours or more. Bone density was checked in four sites: whole body, hip, femoral neck and spine. Short sleepers had lower bone density in all of these areas.

“The difference we observed between these two groups was equal to about one year of bone aging. This is not a huge difference, but it tells us that, in yet one more aspect of health, sleep is important. Any chance we have to spread the message to improve sleep could be helpful in other aspects of physical and mental health.”

Why Bisphosphonate Drugs Are Ill-Advised

The primary treatment for low bone density and osteoporosis in conventional medicine is the use of bisphosphonate drugs13 such as Fosamax. Unfortunately, these drugs can actually make matters worse rather than better, because while they do thicken bone, they make it mechanically weaker.

In my view, these drugs are best avoided, as they do not address the underlying problem. Research has shown bisphosphonate drugs increase your risk for femoral fractures — the very thing you’re trying to avoid, and Fosamax has been required to include a warning about atypical femur fractures on its package insert since 2011.14

These drugs have also been linked to osteonecrosis of the jaw15 (decay of the jawbone), inflammation of the eye,16 liver damage,17 a twofold risk of atrial fibrillation,18 esophageal cancer,19 kidney toxicity20 and hypocalcemia21 (low blood calcium level).

Evidence showing that bisphosphonate drugs weaken bones was clearly detailed in a 2017 study,22,23 which used a particle accelerator to generate detailed images of the internal structure of bone samples from 10 hip fracture patients treated with bisphosphonates, 14 fracture patients that were not treated with the drugs, and six nonfractured controls.

Results showed that, compared to patients that had not been treated with these drugs, bisphosphonate-treated hip bone was 28% weaker. Compared to nonfractured controls, their hip bone was 48% weaker.

Bisphosphonate-treated bone also had 24% more microcracks than samples of untreated fractured bone, and 51% more than nonfractured controls. Overall, bisphosphonate therapy was found to have “no detectable mechanical benefit in the specimens examined.”

On the contrary, the researchers pointed out the use of these drugs “was associated with substantially reduced bone strength,” and that this reduction in strength “may be due to the greater accumulation of microcracks and a lack of any discernible improvement in bone volume or microarchitecture.”

A second paper24 published that same year in Scientific Reports suggested the accumulation of microcracks associated with bisphosphonate drug use might be the result of oversuppressed bone remodeling. According to the authors:25

Correspondingly, bisphosphonate-treated samples also had reduced ultimate tensile strength … compared to the control groups. Our results, therefore, suggest that the reduced bone strength in the bisphosphonate group is due to the accumulation of microcracks.

In this subgroup of bisphosphonate-treated patients that suffered a fracture, the accumulation of microcracks following treatment with bisphosphonates may have compromised the trabecular microstructure. As a result, there may have been weakening of the bone and consequently, an increased risk of fracture.

Bisphosphonate-treated bone also demonstrated a lower density and volume of perforations compared to osteoporotic bone, which may be reflective of the protective effects of bisphosphonates in limiting the development of perforations through osteoclastic inhibition.

However, it is the oversuppression of remodeling that has detrimental effects, as this predisposes to microcrack accumulation and propagation.”

If bisphosphonate drugs don’t do the trick, how can you safeguard yourself against osteoporosis? As mentioned, several lifestyle factors that you have full control over play important roles.

Aside from making sure you get at least seven hours of sleep each night — which may lower your risk of osteoporosis of the hip by 22% and spine osteoporosis by 28% — getting the right kind of loadbearing exercise is key for the maintenance of strong bones. There are four considerations to keep in mind, though:

If conventional resistance training is inefficient at best, what can you do? Your best alternative is to find a training center or clinic that offers osteogenic loading therapy,29,30,31,32 which allows you to achieve this level of force without risk or injury.

Another exercise strategy that appears to have a beneficial effect on bone health and can be safely performed by the elderly and the frail is blood flow restriction (BFR) training. BFR is a novel type of biohack that allows you to do strength exercises using just 20% to 30% of your max one-rep weight, while still reaping maximum benefits.

It involves performing strength training exercises while restricting venous blood flow return to your heart (but not arterial flow) to the extremity being worked. This is done by wrapping your arms or legs with a cuff that mildly restricts blood flow.

By forcing blood to remain inside your extremity while it is exercising with light weights, you stimulate metabolic changes resulting in greater strength with virtually no risk of injury.

There’s also some evidence it may improve your bone metabolism, although more research is still needed to confirm it and tease out the mechanisms. As noted in a 2018 systematic review of 170 articles looking at BFR’s impact on bone metabolism:34

The 2012 paper, “Blood Flow Restriction: Rationale for Improving Bone,” hypothesized that the main mechanism behind favorable bone responses are a result of the “increased intramedullary pressure and interstitial fluid flow within the bone caused by venous occlusion.” For instructions and details about how to do BFR, sign up to receive my free BFR report.

Naturally, since bone is living tissue that’s constantly undergoing the addition of new bone cells and the removal of old ones, your basic metabolic fitness is a foundational aspect of maintaining healthy bone.

As noted in the paper “Naturopathic Approaches to Preventing and Treating Osteoporosis,”35 published in the Natural Medicine Journal, “The best approach to getting sufficient nutrients to build and maintain strong bones is to consistently make healthy food choices.” That said, some nutrients are more important than others. Among the most important for bone health are:36

• Vitamin D — Vitamin D plays a regulatory role in the absorption of calcium and phosphorous, which are important for healthy bones. As explained in the Natural Medicine Journal:37

“If vitamin D levels are low, parathyroid hormone (PTH) increases and triggers osteoclasts to release calcium into the blood via bone readsorption. If this process continues over time, it weakens bone and leads to osteoporosis …

Deficiency can create secondary hyperparathyroidism, leading to a loss of collagen matrix and minerals, which increases the risk of osteoporosis and fractures. Poor bone remodeling due to higher osteoclast vs. osteoblast activity can occur with low levels of vitamin D …”

• Vitamin K (both K1 and K2) — Vitamin K1, phylloquinone, is found in plants and green vegetables. Osteocalcin is a protein produced by your osteoblasts (cells responsible for bone formation), and is utilized within the bone as an integral part of the bone-forming process.

However, osteocalcin must be “carboxylated” before it can be effective. Vitamin K1 functions as a cofactor for the enzyme that catalyzes the carboxylation of osteocalcin.38 As noted in a 2017 paper39 in the journal Metabolism, “it seems to promote the transition of osteoblasts to osteocytes and also limits the process of osteoclastogenesis.”

Vitamin K2 directs calcium to your bones and prevents it from being deposited in your soft tissues, organs and joint spaces. Vitamin K2 also activates the protein hormone osteocalcin, produced by osteoblasts, which is needed to bind calcium into the matrix of your bone.

• Calcium — Calcium works synergistically with vitamin K2, magnesium and vitamin D, and needs all three of those to function properly.

Vitamin D aids calcium absorption, while vitamin K2 makes sure the calcium ends up in the right place — your bones and not your arteries. Taking a high-dose calcium supplement while being vitamin K2 deficient can thus lead to hardening of your arteries. The Natural Medicine Journal reports that:41

“To maintain bone health, 1,000–1,500 mg/day of calcium (including food sources and supplements) is recommended (varies with age, weight, sex, etc.) by the National Academy of Sciences.

Sufficient calcium intake is important in preventing osteoporosis, because if the body’s stores of calcium is low, calcium will be leached from bones, which can lead to decreased bone mass and the initiation or worsening of osteoporosis.”

Raw, grass fed yogurt is an excellent calcium source that research has shown can lower your bone loss.

“Low levels of blood magnesium correlates with low bone density, and several studies have supported the use of oral magnesium supplementation to increase bone density …

Magnesium deficiency may impair the production of parathyroid hormone and 1,25-dihydroxyvitamin D, which negatively affects bone mineralization. Supplementing with 250–400 mg a day of magnesium is usually recommended.”

• Collagen — Collagen has been shown to strengthen bones43,44 and improve osteoporosis.45

Optimize Your Sleep for a Longer, Healthier Life

Getting back to the issue of sleep, recent research46,47,48 also shows that sleeping less than six hours a night increases the risk of death in middle‐aged adults with cardiometabolic risk factors and those who have already developed cardiovascular and cerebrovascular diseases.

The adjusted hazard ratio for all-cause mortality among those who slept less than six hours and had cardiometabolic risk factors (high blood pressure, elevated glucose or Type 2 diabetes) was 2.14 times higher than those who regularly slept six hours or more.

Considering the importance of sleep for preventing chronic diseases that will cut your life short, you’d be wise to address any sleep problems you may be having, and make sure you’re getting about eight hours every night. For many, this means forgoing night-owl tendencies and getting to bed at a reasonable time.

If you need to be up at 6 a.m., you need a lights-out deadline of 9:30 or 10 p.m., depending on how quickly you tend to fall asleep. If you find it difficult to get to bed on time, consider setting a bedtime alarm to remind you that it’s time to shut everything down and get ready for sleep.