World Economic Forum Was Created by US Policies 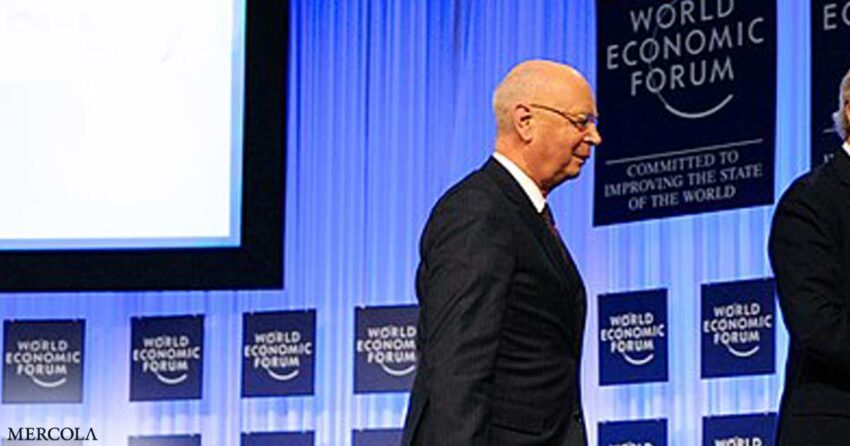 Klaus Schwab, founder and executive chairman of the World Economic Forum (WEF), is the personification of The Great Reset — the ultimate goal of which is to do away with the democratic process and give all ownership and control to the deep state — and the technocratic elite who control it.

In the video above, comedian JP Sears outlines the primary reasons why this makes Schwab easily among the most dangerous people in the world — and arguably the most dangerous. One of The Great Reset’s “new normal” dictums is that you’ll own nothing and be happy. This is part of WEF’s 2030 agenda,1 and a plan is already in place to make it happen.

Schwab is also author of the book, “COVID-19: The Great Reset,” which was published July 9, 2020. “Wonder how he got it written and published that fast?” Sears said. “It’s almost like he prewrote it before he started the pandemic. I mean, before the pandemic started.”2

Acute Crisis Boosts the Power of the State

WEF operates via fearmongering — about disease and environmental catastrophes, for starters. When the population is controlled by fear, it welcomes authoritarian “protections” like increased surveillance and digital identity systems, introduced under the guise of safety, but which ultimately remove personal autonomy and freedom.

In fact, Schwab wrote, “One of the greatest lessons of the past five centuries in Europe and America is this: Acute crisis contributes to boosting the power of the state. It’s always been the case, and there is no reason why it should be different with the COVID-19 pandemic.”3 Remember, nobody elected Schwab to any government position, but he’s behind the scenes pulling strings nonetheless.

WEF portrays itself as a global organization committed to improving the state of the world, but most would be taken aback if they knew who’s behind it. As Sears put it:4

Committed to Reengineering Life Itself

“By hacking organisms,” Harari said, “elites may gain the power to re-engineer the future of life itself. Because once you can hack something, you can usually also engineer it.”5 Soon, he says, some corporations and governments will be able to “systematically hack all the people.” And if they succeed in hacking life, he describes it as the “greatest revolution in biology since the beginning of life 4 billion years ago.” According to Harari:6

Once human life is hacked, the hackers will maintain control over life itself — a process that has been accelerated by the pandemic. After all, Harari said, “It’s often said that you should never let a good crisis go to waste.”7

Surveillance is a key part of the plan for global totalitarian control, and Harari says that in 100 years, people will be able to look back and identify the COVID-19 pandemic as the moment when a new regime in surveillance took over — “especially surveillance under the skin.”8

WEF maintains a “Young Global Leaders” program,9 a five-year indoctrination into their principles. Its goal is to create world leaders who don’t answer to their people but to their bosses at WEF. Graduates of the program include world leaders who are “suspiciously in lockstep” with WEF’s Great Reset, such as:10

Sponsors of WEF’s Young Global Leaders Program include the Bill & Melinda Gates Foundation and Google — “I wonder why Google censors and shapes information to be in exact support of the World Economic Forum’s narrative?” Sears asks.11 Meanwhile, WEF is predicting a worldwide cyberattack, which Schwab says “could bring a complete halt to the power supply, transportation, hospital services, our society as a whole.”12

WEF then conducted a simulation of the cyberattack, which appears more like an elaborate planning session, much like Event 201 — WEF’s pandemic preparedness simulation for a “novel coronavirus” that took place in October 2019.

How Will People ‘Own Nothing and Be Happy’?

If WEF and Schwab are intent on moving ahead with their plan for global domination, they’ll need to get people on board with the idea of giving up ownership to an elite class. But how? Bring in BlackRock, an investment firm that has $9 trillion under management — a higher GDP than every country on Earth aside from the U.S. and China, Sears says.

BlackRock has more power than most governments on Earth, and it also controls the Federal Reserve, Wall Street mega-banks like Goldman Sachs and the WEF’s Great Reset, according to F. William Engdahl, a strategic risk consultant and lecturer who holds a degree in politics from Princeton University.13

To do this, they’d need to infiltrate the government — and they have. Brian Deese, the U.S. director of National Economic Council, was formerly BlackRock’s global head of sustainable investing. “Now he’s Biden’s main adviser for economic policy,” Sears says.15 Vice President Kamala Harris’ chief economic adviser Michael Pyle also came from BlackRock, where he was a global chief economic strategist.

“It looks like corporatism but it’s probably not,” Sears says jokingly. “But if it was, it would actually be a viable strategy for BlackRock and the World Economic Forum to own everything and for you to own nothing.”16

BlackRock is also buying up single family homes at an alarming rate, paying up to 50% above asking price17 so “average” people can’t buy them. Why is BlackRock interested in overpaying for modest, single family homes? In a Twitter thread posted by user Culturalhusbandry, it’s noted:18

“Black Rock, Vanguard, and State Street control 20 trillion dollars worth of assets. Blackrock alone has a 10 billion a year surplus. That means with 5-20% down they can get mortgages on 130-170k homes every year. Or they can outright buy 30k homes per year. Just Blackrock.

… Now imagine every major institute doing this, because they are. It can be such a fast sweeping action that 30yrs may be overshooting it. They may accomplish feudalism in 15 years.”

If the average American is pushed out of the housing market, and most of the available housing is owned by investment groups and corporations, you become beholden to them as your landlord. You’ll then own nothing, not even your home. All items and resources are to be used by the collective, while actual ownership is restricted to an upper stratum of social class.

Schwab Wasn’t the Mastermind Behind WEF

If Schwab is the most dangerous person alive today, his predecessors deserve honorable mentions. In an investigative report by journalist Johnny Vedmore, it’s revealed that Schwab wasn’t the mastermind behind WEF and The Great Reset.

That honor goes to his three mentors — John K. Galbraith, a Canadian-American economist, diplomat and public policy maker, Herman Kahn, who created concepts on nuclear deterrence that became official military policy, and Henry A. Kissinger, who recruited Schwab at a Harvard international seminar, which was funded by the U.S. CIA.

“If you have a decent knowledge of Klaus Schwab’s history, you will know that he attended Harvard in the 1960s where he would meet then-professor Henry A. Kissinger, a man with whom Schwab would form a lifelong friendship,” Vedmore explained.19

“My research indicates that the World Economic Forum is not a European creation. In reality, it is instead an operation which emanates from the public policy grandees of the Kennedy, Johnson and Nixonian eras of American politics; all of whom had ties to the Council on Foreign Relations and the associated “Round Table” Movement, with a supporting role played by the Central Intelligence Agency.

There were three extremely powerful and influential men, Kissinger among them, who would lead Klaus Schwab towards their ultimate goal of complete American Empire-aligned global domination via the creation of social and economic policies.

In addition, two of the men were at the core of manufacturing the ever present threat of global thermonuclear war … their paths would cross and coalesce during the 1960s … they recruited Klaus Schwab through a CIA-funded program, and … they were the real driving force behind the creation of the World Economic Forum.”

Your Free Will Is Under Attack

Environmental pollution, disease and cyberattacks are being used to generate fear in order to keep the population compliant. Another part of The Great Reset is a reset of the economy, including jobs. Many across the U.S. are facing unemployment if they do not choose to take a genetic therapy experiment in the form of a COVID-19 shot.

It’s clear that the COVID-19 pandemic has created “a unique window of opportunity” to rapidly usher in the Great Reset, which involves changing everything from future global relations and the direction of national economies to “the priorities of societies, the nature of business models and the management of a global commons.”20

Part of the plan involves the Fourth Industrial Revolution, which Schwab has been discussing since at least 201621 and “is characterized by a fusion of technologies that is blurring the lines between the physical, digital, and biological spheres.”

In terms of government, the Revolution will bring new technological powers that allow for increased population control via “pervasive surveillance systems and the ability to control digital infrastructure.”22 Meanwhile, while people are busy worrying about the orchestrated threats that are out to get them, technocrats are working on how to remove the essence of what it means to be human — namely, free will.

“Humans are now hackable animals,” Harari said. “Humans have this soul or spirit and they have free will, and nobody knows what’s happening inside me, so whatever I choose, whether in the election or whether in the supermarket, this is my free will — that’s over.”23 It’s urgent that we all take steps to remain free, sovereign individuals, which can be as straightforward as:24

“We are in the process of either The Great Reset or the Great Awakening,” Sears points out, “and the choice isn’t Klaus Schwab’s. The choice is yours.”25