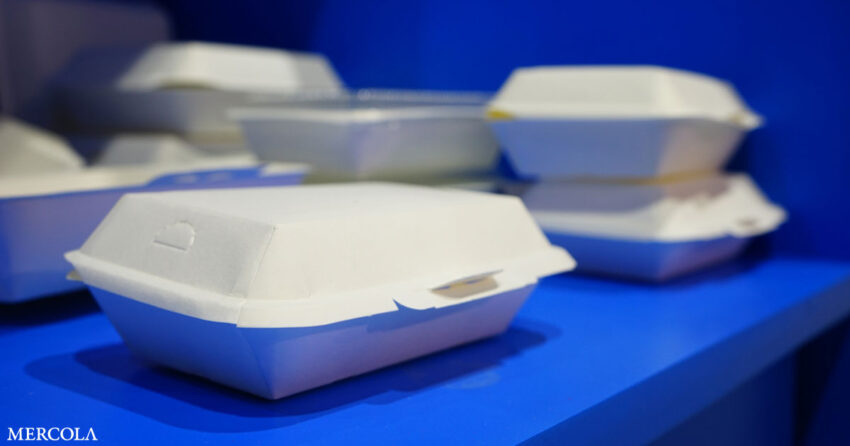 In the mid-20th century, a group of complex, man-made chemicals called per- and polyfluoroalkyl substances (PFAS) were first produced1 from the fusion of carbon and fluorine in the lab.2

Although some food manufacturers have announced they would voluntarily withdraw PFAS from their food packaging,3 a recent investigation by Consumer Reports found that there continues to be high levels in packaging from well-known fast-food restaurants and grocery store chains.4

Experts estimate that the PFAS family may include up to 10,000 chemicals, 4,700 of which have been inventoried and identified on the global market.5 The most widely recognized are perfluorooctanoic acid (PFOA) and perfluorooctane sulfonate (PFOS), both of which have associations with kidney cancer and testicular cancer.6

In 2002, 3M agreed to stop making PFOS and in 2005, DuPont agreed to phase out PFOA by 2015.7 Yet, just a little chemical tweak and the companies can market a new generation of chemicals with similar structures.

The unique properties of this class of chemical give other structures the ability to repel water and oil, reduce friction and resist temperature.8 These properties make the chemical valuable in aerospace technology, construction, photography, electronics and aviation. They’re also commonly found in everyday items like textiles, nonstick cookware and paper products.

A combination of ubiquitous use, delays in reducing use and the known bioaccumulative and persistent effects have produced a massive environmental problem. This is largely because many of these chemicals can take over 1,000 years to degrade,9 thus earning them the nickname “forever chemicals.” In May 2015, 200 scientists from 38 countries signed what is called the Madrid Statement on PFASs.10

The statement warns about the harms of all PFAS chemicals. According to the Madrid Statement, the health effects associated with long chain PFAS include multiple conditions such as liver toxicity and malfunction, obesity, reduced birth weight, reduced hormone levels and tumors in multiple organ systems.11

Thousands of products that rely on the characteristics of the fluorine-carbon bonds in PFASs have been created, used and disposed of in landfills where they contaminate the soil and water supply.12 If they are incinerated, the chemicals become air pollutants. These are the types of chemicals Consumer Reports recently found in food wrappers from popular grocery stores and food chains.

Environmental and health safety advocates have been pushing to have PFAS use restricted, especially in items that come in contact with food. Some restaurants and grocery stores claim to have taken steps to limit their use in packaging or that they plan to phase it out. To ascertain how much is still being used, Consumer Reports tested more than 100 types of food packages from grocery store chains and restaurants.13

They found that PFASs were in measurable amounts from every retailer tested. Since testing for the over 4,700 known and identified PFAS chemicals is time-consuming and expensive, Consumer Reports tested for the total organic fluorine content because all PFAS contain it and there are very few other sources.14

To date, California announced that beginning in January 2023, it would limit intentionally added PFAS to less than 100 parts per million (ppm) of organic fluorine. This is the lowest publicly announced level in the U.S., as compared to Denmark, which set a 20-ppm threshold. Consumer Reports found organic fluorine in more than half the multiple samples of 118 products tested.

Graham Peaslee, Ph.D., professor of physics, chemistry and biochemistry at the University of Notre Dame, who has extensively studied PFAS in food packaging, notes:15 “If they can get to 100 ppm, they should be able to get to 20 ppm. Lower is always the ultimate goal.”

Consumer Reports writes that the widespread use of PFAS may mean that it shows up in food packaging unintentionally. For instance, the machines that make the packaging, recycled paper and ink used on the food containers may also contain PFAS. Consumer Reports also tested products from companies that said they had already reduced PFAS in their food packaging, yet seven were still above 20 ppm.16

They went on to test a subset of the products that contained the highest levels to analyze the specific PFAS chemicals they contained. Testing is limited as the current analysis can only identify 30 known PFAS. They found PFBA, which has been linked to severe cases of COVID-19 and accumulates in the lungs, at the highest concentration.17

Testing also found that PFOA was the most frequently detected compound and PFOS ranked fifth most common, although both chemicals have been banned and are no longer manufactured in the U.S. Michael Hansen, Ph.D., a senior scientist at Consumer Reports, offered the explanation that “Manufacturers could unknowingly still be using the compounds, or they could be using materials produced overseas.”18

Additionally, the researchers found that the 30 identifiable compounds in the products tested accounted for less than 1% of all the organic fluorine, which is an indication of the extent of the contamination. Consumer Reports implies the difficulty in regulation and testing of dangerous chemicals may originate at the top of the food chain with the FDA, writing:

“That shows that the vast majority of PFAS are not identified with commonly used tests, Peaslee says. And it underscores an ongoing argument about whether the compounds should be regulated as a group or on a case-by-case basis.

The Food and Drug Administration favors regulating them individually, it told CR [Consumer Reports], because concerns about one specific PFAS might not be “indicative of concerns for all chemicals classified as PFAS.”

But CR’s Hansen says that when regulators try to restrict specific compounds, such as PFOA, manufacturers may simply switch to others—and can decide on their own to call new compounds safe, without independent verification.”

Biodegradable Take-Out Containers May Be a Worse Option

Concerns over the mounting plastic waste problem in the environment may have pushed some fast-food companies to invest in reportedly safer biodegradable wrappers and containers. Yet, analyses show that of the 18 biodegradable fiber bowls tested from 8 restaurants in 14 locations that claimed to compost their waste products, all contained high levels of fluorine.19

Peaslee conducted these tests in 2019. The inside of the bowls where food comes in contact averaged 1,599 ppm, which is a level far higher than what you’d find in an accidentally contaminated sample. Overall, the samples averaged 1,670 ppm, 50 times higher than what was found in printer paper.

Disturbingly, these biodegradable food containers that have forever chemicals likely create an even greater problem. “Biodegradable” means people may add them to their compost pile, which creates a vicious cycle where the chemicals contaminate the compost, which is in turn mixed into the soil where they can contaminate the food grown in it. Ultimately the chemicals end up back on your plate, this time inside the food.

The Centers for Disease Control and Prevention published a study20 in 2007 that found PFAS chemicals in the blood of more than 98% of the Americans tested. Considering the current prevalence in the food supply, it seems reasonable to assume that everyone is exposed and that blood levels have likely increased in the years since the CDC’s test.

Other studies21,22 have confirmed that fluorinated chemicals can migrate from food packaging, whether biodegradable or not, into the food. In 2019,23 researchers assessed the presence of these chemicals in municipal compost. In all, samples from nine commercial compost stations and one backyard compost pile were tested for 17 different PFAS.

Confirming suspicions, compost in which food packaging was included had a toxic load ranging from 28.7 micrograms per kilo to 75.9 mcg/kg. Compost samples that did not include food packaging, on the other hand, had a contamination level ranging between just 2.38 and 7.6 mcg/kg.

While it’s disturbing that all compost samples contained PFOA and PFOS — the older, long-chained PFAS that are no longer in use — compost with food packaging was clearly more heavily contaminated with a variety of PFAS.

Researchers are also interested in the potential impact of PFAS in personal care products, such as cosmetics and makeup. Scientists from the University of Notre Dame purchased 231 products in eight categories that are commonly found throughout the U.S. and Canada. These included lip, eye, face and eyebrow products, foundations, mascaras and concealers.24

The products were purchased in stores in Indiana and Michigan and tested for fluorine. They found that 56% of the foundations and eye products, 48% of the lip products and 47% of mascaras tested positive. Many of those that were positive for fluorine were labeled “long-lasting” or “wear-resistant.”

As important as the positive tests was the revelation that only 8% of the products included PFAS chemicals in the ingredient label. Peaslee was again the principal investigator in the study. He spoke with a journalist from The Washington Post, saying:25

“We were shocked to see how much is in some of these products … There’s no way for an average consumer to read a label and understand what’s in the product they just purchased. They can’t trust the label and that can be fixed.”

Water is another source of exposure to these “forever chemicals.” PFASs can enter the water supply through contamination of the water table or surface water. Additionally, drinking water is treated with a variety of chemicals, and just one glass of tap water may contain a cocktail of PFAS,26 lead, arsenic27 and a list of other chemicals found in your local area that you were never meant to consume.28

You can check your local water supply by entering your zip code into the Environmental Working Group’s (EWG) Tap Water Database.29 Water pollution may be a function of an aging infrastructure30 or contamination from firefighting foam,31 agrichemicals,32 drugs, nerve toxins produced by freshwater cyanobacteria33 and toxins that are intentionally added.34

If you are hoping that bottled water may be the answer to a lower toxicity level, you’d be wrong. Bottled water sales are rising35 and PFAS contamination has also been found in bottled water supplies. In 2019, the Commonwealth of Massachusetts issued an advisory for several brands of bottled water after PFAS was detected in a sample.36

Another study37 published in late 2021, led by Johns Hopkins School of Public Health, found PFAS in 39 out of 101 bottles of water tested. It makes sense that bottled water may be contaminated with this highly toxic chemical unless it’s specially filtered since water is a finite resource that gets recycled for use:38 Most bottled water is taken from springs, wells or municipal supplies39 and PFAS are persistent in the environment.40

Tips to Lower Your Exposure to Forever Chemicals

More than 15 years ago, the EWG found41 287 chemicals in umbilical cord blood that passes between mother and baby. Of these, 180 are known to cause cancer in humans and animals, 217 are known toxins to the brain and nervous system, and 208 are known to cause abnormal development or birth defects in animal models.

The scientists who signed the Madrid Statement on PFAS recommended avoiding any and all products containing PFAS. You may find additional helpful tips in the Environmental Working Group’s “Guide to Avoiding PFCS.”42 Here are several items to avoid that I’ve suggested in the past: