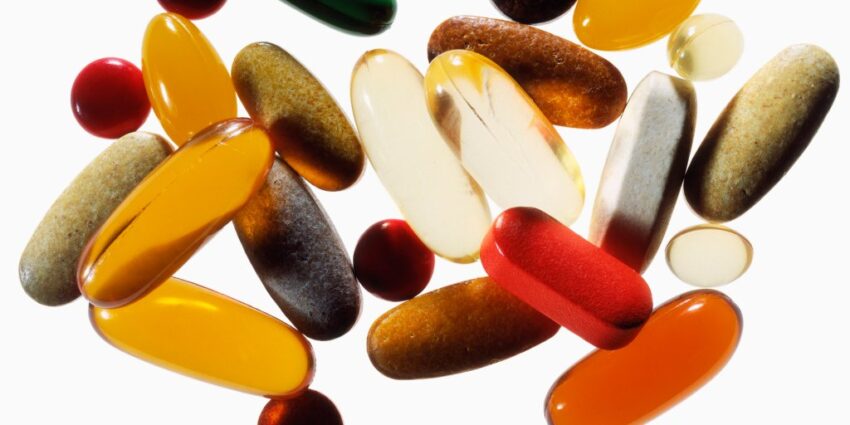 From multivitamins and melatonin to fiber and fish oil, Americans who are trying to boost their health and immunity have a plethora of supplements to choose from. An estimated 58% of U.S. adults ages 20 and over take dietary supplements, according to the U.S. Centers for Disease Control and Prevention, and the supplement industry is valued at more than $30 billion a year. Supplement use has been growing rapidly over the past few decades along with the wellness industry.

“The popular belief is that a supplement is going to be helpful for promoting health,” says Fang Fang Zhang, a professor at Tufts University’s Friedman School of Nutrition Science and Policy. She has found that people who use supplements more frequently are also more likely to have a higher level of education and income, a healthier lifestyle, and a greater likelihood to eat a healthy diet and exercise. “So those who are taking supplements are more health-conscious overall,” she says.
[time-brightcove not-tgx=”true”]

But if you’re already healthy, most supplements may not do much to improve your health or stave off death. “There’s no clear evidence to suggest benefits of dietary supplement use for many popular or common health outcomes,” says Zhang.

In some cases, supplement use could even be harmful. A 2015 study published in the New England Journal of Medicine found that there are an estimated 23,000 emergency department visits every year in the U.S. for adverse events related to the use of dietary supplements, many involving cardiovascular issues from weight-loss or energy products. “Particularly when we use very high dose implementations, sometimes we might be doing more harm than good,” says Eliseo Guallar, professor of epidemiology and medicine at Johns Hopkins Bloomberg School of Public Health.

Some experts have called for more stringent federal regulation to ensure that supplements are safe and effective. Until then, consumers may want to proceed with caution and do their due diligence before taking supplements.

What are supplements good for?

Vitamins, minerals, and many other micronutrients are vital to the body’s functioning and are a crucial part of a good diet. But eating nutrients in food is not the same as taking them in supplement form. “Dietary supplement use is not a substitute for a healthy, balanced diet,” says Zhang.

Vitamin and mineral supplements can be extremely useful when prescribed for people with nutritional deficiencies and certain illnesses. “High-quality supplements should be widely available, and we need them as part of medical treatment,” says Dr. Pieter Cohen, an associate professor at Harvard Medical School and an internist at Cambridge Health Alliance.

However, much packaged food in the U.S. is already fortified with additional nutrients, making nutritional deficiencies uncommon in the general population. For most people, supplements may offer questionable benefit.

In an analysis published in 2020 in the BMJ, Zhang reviewed results from several trials and found no clear evidence that nutritional supplements like vitamins and minerals are helpful in healthy people for preventing chronic diseases such as cardiovascular disease or cancer.

The evidence is even more muddled for certain plant-derived dietary supplements known as botanicals, such as echinacea and ginkgo. Scientists have tried to decipher the effects of many botanicals or nutritional supplements, but the field is still littered with weak or contradictory results. “We know a lot,” says Guallar. “The problem is that sometimes the claims go beyond what we know.”

Many of the health claims that companies slap on their supplement labels may extrapolate results seen in animals to humans or make too much of what are still preliminary findings. “These products should not be promoted as if they will have benefits for our health when it’s never been proven that they work in humans,” says Cohen.

As a result, consumers may not know what to make of supplement claims and may be confused about which supplements are useful. “This is also combined with commercial pressure to promote some of these supplements,” says Guallar.

How dietary supplements are promoted and advertised is itself a function of how they’re regulated by the U.S. Food and Drug Administration (FDA).

Regulated as foods, not drugs

Even though many people take supplements because they want to improve their health, the FDA doesn’t regulate them as medications but instead as foods, under the Dietary Supplement Health and Education Act of 1994.

“What happened in 1994 was that all of these products from vitamins, minerals, to botanical extracts became subcategories of food,” explains Cohen. “It also created a completely different structure in terms of advertising, like the ability to advertise products to say things like ‘This will boost your immune system’, as code for ‘This will prevent infection,’” he says.

Manufacturers are not required to prove that their supplements are effective or safe before they market them. And supplements are not held to the same manufacturing standards as drugs, which can lead to adulterated or substandard products. “It’s basically very difficult, if not impossible, to separate poor-quality products from higher-quality ones in the market, at least at present,” says Cohen.

Part of the problem is that the current system doesn’t do a good enough job of tracking when supplements cause harm, says Cohen. “I think we have to realize that for the public to have access to high-quality vitamins and minerals and botanicals, we’re going to need to reform the law,” he says.

Cohen has previously suggested changes to the current regulations, including standardizing manufacturing processes, carefully vetting new ingredients, and creating higher standards for the claims manufacturers can make about their supplements.

But for now, consumers can keep a few things in mind when deciding whether to take supplements.

When evaluating supplements, be wary of extravagant claims, as they’re unlikely to hold true. Also be aware that some supplements may contain a much higher dose in a single pill or serving than you need. “Sometimes these supplements are promoted at doses that are much higher than what you would get with diet,” says Guallar.

In general, consult your doctor about any supplement use, as many supplements can interact with medications you’re taking. They may also not be safe to take while pregnant or breastfeeding, before a surgery, or during cancer treatment or other medical treatments.

Consumers should also know how to spot poor-quality products. “My general advice to patients is to stick to supplements that list only one ingredient, and avoid a mixture of things, with the exception being multivitamins,” says Cohen. He cites certain certifications, such as USP or NSF International, as a sign of higher-quality products.

Watch out for weight-loss supplements, muscle builders, and sexual enhancers, which previous investigations have found are sometimes adulterated with illegal or obscured ingredients, such as pharmaceutical drugs and synthetic chemicals. These types of supplements may be particularly susceptible to containing these undisclosed ingredients.

Finally, consumers can look up information on specific vitamins, minerals, and botanicals on trustworthy websites, including those run by the Memorial Sloan-Kettering Cancer Center and the National Institutes of Health.

“We don’t eat a single nutrient; we eat a food,” says Zhang. “That’s why a lot of supplements don’t achieve the same effect as the natural nutrients coming from food sources,” she says.

Zhang notes that the scientific evidence could always evolve as researchers continue to study nutritional supplements. But for now, there are more reliable ways to improve health. “Dietary supplement use shouldn’t be a substitute for a healthy diet and lifestyle,” says Zhang. “There’s no magic pill, unfortunately.”

Fiber: Fiber supplements like psyllium may help reduce constipation, prevent heart disease, and lower cholesterol—though getting fiber from your diet also provides the vitamins and micronutrients found in whole foods.

Melatonin: It may help with jet lag. However, the evidence that it helps with insomnia or sleep disorders is not particularly strong.

A supplement mix for adults with age-related macular degeneration: A combination of zinc, vitamins C and E, copper, lutein, and zeaxanthin may help slow vision loss in people with this eye disease.

Mixed or no evidence they help

Echinacea: It may slightly reduce chances of catching a cold, but the evidence is weak, and there’s little proof that it helps treat colds or respiratory infections.

Ginkgo biloba: Studies have found that this supplement does not seem to improve cognitive performance or prevent Alzheimer’s disease or dementia.

Vitamin D: Despite a lot of interest in its many potential health benefits, it’s still unclear if D supplements do much for healthy people. And in people who don’t have a deficiency, Zhang has found that very high doses of vitamin D may increase risk of all-cause and cancer mortality.

Antioxidants: Comprising vitamins A, C, and E, as well as selenium, beta carotene, and folate, antioxidants have been touted as having numerous health benefits, but so far they have not lived up to the hype. They don’t appear to protect against heart disease, stroke, or cancer, and some may be harmful at high doses.