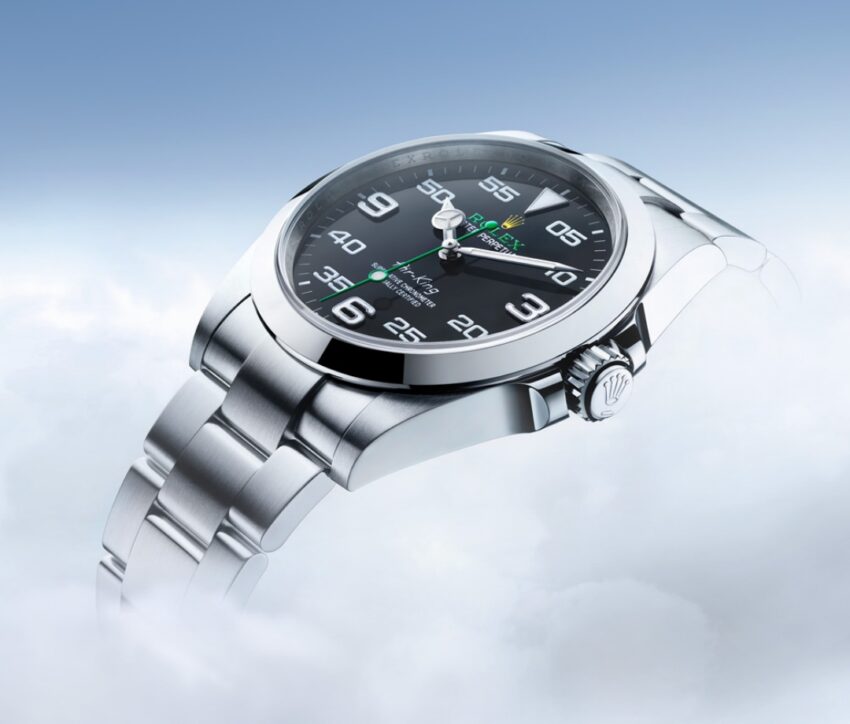 The aviation-themed watches just keep coming. Last week, we highlighted the release of a new Longines GMT watch with a fascinating backstory (and impressive performance specs), and this week, another high-flying timepiece has captured our attention: the new Rolex Air-King. Officially known as the Rolex Oyster Perpetual Air-King, the revamped watch features a new case design, a revised bracelet, and some key aesthetic tweaks on the dial. With these changes, the Air-King gets sportier and more functional, blurring the line between tool watches and dress watches.

The Air-King is a nod to Rolex’s involvement in the pioneering days of aviation. Rolex timepieces accompanied pilots on several notable flights during the 1930s, including the record-setting flight from London to Australia that Owen Cathcart-Jones and Ken Waller made in 1934. The Rolex Air-King didn’t launch until 1958, however. It evolved over the decades and, in 2016, it gained its distinctive black dial with oversized three, six, and nine numerals. The current Air-King retains those design hallmarks but includes some notable aesthetic changes as well.

The Air-King features a 40mm case crafted from Oystersteel, Rolex’s steel alloy that offers improved corrosion resistance. Most notably, the case has been redesigned with crown guards and straight sides, which gives it a more distinctive tool watch look and positions it with Rolex’s Professional line of watches. It retains the iconic black dial and large numerals, but Rolex added a zero before the five on the minutes scale. That gives the dial a more symmetrical layout: Each five-minute interval now has a two-digit marking.

But symmetry isn’t the only change on the dial—it’s also more legible. Rolex added Chromalight, its proprietary luminescent material, to the hands, 12 o’clock hour marker, and the three, six, and nine numerals. Compared to the white gold used on the dial in previous versions of the Air-King, the Chromalight indices should be much more visible in low-light conditions. Plus, the watch is topped with durable sapphire crystal glass, so you won’t have to worry about scratches clouding up the view.

That utility-minded approach extends to the bracelet as well. It now includes Rolex’s Oysterlock safety clasp, which prevents accidental opening, and an Easylink extension link, which allows the wearer to adjust the bracelet’s fit by about five millimeters. Overall, the new Air-King picks up some tool watch functionality, which should make it easy to use day to day. At the same time, the sleek, polished case and the lack of a chunky bezel (a common feature on tool watches) ensures this update preserves the distinctive character these watches are known for.

The Air-King is powered by Rolex’s calibre 3230 movement, which was developed and manufactured in-house and debuted in 2020. It boasts a power reserve of around 70 hours, and as you’d expect from a Rolex, it’s highly accurate: Finished Air-Kings go through in-house testing to maintain time within just minus two or plus two seconds each day. That’s an even more demanding standard than COSC, a certification used throughout the watchmaking industry.

Rolex is a storied brand with many compelling timepieces, but the latest Air-King is a real standout in its lineup.

‘House of the Dragon,’ the New ‘Game of Thrones’ Prequel Series, Gets Official R… Read article