How Alexander Skarsgård Transformed Into a Viking for ‘The Northman’ 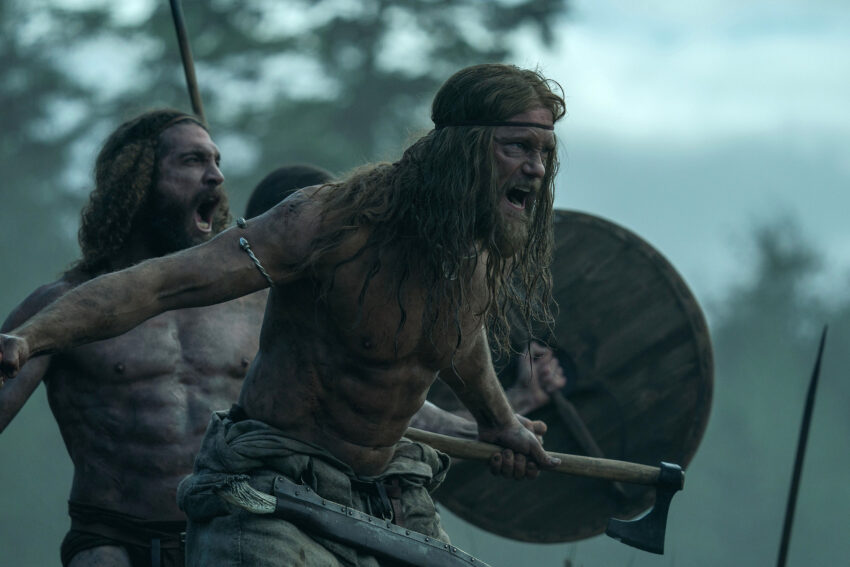 Alexander Skarsgård has been drawn to Viking stories since childhood. His family’s home on the Swedish island of Öland was surrounded by ancient runestones, monuments erected to commemorate Vikings who had died with great honor in battle. Growing up among the legend of those feared warriors, the actor has long carried a desire to tell their story in a more authentic light. That desire became a reality when he met with director Robert Eggers for an early meeting that would lead to The Northman.

“This is more than a big action movie, even though there’s a lot of action in it,” says Skarsgård. Based on the Old Norse tale that inspired Shakespeare’s Hamlet, the story follows Prince Amleth from youth to adulthood on a quest for bloody vengeance for his slain father. The lore has been combined with diligent research to create an odyssey that honors both the brutal reality and the mythology of the Viking Age. “I believe working with Robert we were able to create something special that hasn’t been seen before.”

We spoke with Skarsgård about becoming a Viking berserker (frenzied Norse warrior), training with axes, and more. Courtesy ImageMen’s Journal: How does it feel to have your Viking epic finally out in the world?

Alexander Skarsgård: I’ve been harboring a dream to do a project like this since I was a young boy in Sweden. I spent my summers on an island in the Baltic, and some of my earliest memories are of reading inscriptions on Viking runestones. I was mesmerized by them. I would pretend I was a Viking as a kid. I was so obsessed I even gave my two younger brothers their own Viking names. So Gustaf’s actual legal middle name is Ormr, which means snake, and Sam’s is Ymir, which was the name of the first giant in Norse mythology. I consider it an understatement to say that doing this movie and having it out there is a dream come true.

The Northman Trailer: Alexander Skarsgård Is Out for Blood Read article

Going into filming, what did your Viking character require you to look like physically?

The first time we see my character Amleth in adulthood, he’s a berserker—part of this savage fighting team within a Viking army doing raids along the Russian rivers in an area that is now Ukraine. He’s being used by the Viking chieftain as the tip of the spear for his invasion. He, along with his group of fellow berserkers, are thrown into the lion’s den to initiate the attacks while the rest of the force comes in as a second wave.

So it was important that the character look like he was physically capable of a tremendous amount of violence. His whole purpose at that point in his life is to wreak havoc. He’s lost his way and forgotten the mission he had given himself as a young boy. Now he’s being used as a weapon to attack villages for the gain of others. I needed to make sure that he looked as imposing and intimidating as possible.

You worked with trainer Magnus Lygdbäck to get into shape for the role. What did you like about working with him?

Magnus and I spent nine months together while shooting Tarzan. That was the first time I’d ever worked with a personal trainer. It was the first time I had to drastically change my body for a role. We didn’t know exactly how my body was going to respond to his workout plan and diet. I was very stressed and nervous about whether we were going to get where we needed to go as far as body goals. I had a hard time relaxing and carried that stress through a lot of the prep and into the shoot.

The process was a lot simpler this time around because we knew each other—and how my body was going to respond to certain training and diets. I wouldn’t say that made the work any easier because we trained extremely hard from the start. There was a tremendous amount of time in the gym and fight choreography to learn, but at least I could sleep at night! I was supposed to be incredibly lean while staying muscular when I was doing Tarzan and that meant a very restrictive diet. I couldn’t even have an orange juice or a drop of alcohol because of the sugar. The situation was different for The Northman, because I wasn’t portraying this very popular character that people had all of these preconceived notions about. I’m playing a warrior of an original design based on what we know of the time—so we had more room to work with as long as the bulk was there. The goal was to build a physique that looked like the combination of a wolf and a bear.

I’m guessing it was nice to get a break from the diet from time to time.

Because it was more about the mass and not so much about being completely shredded, I could occasionally blow off the diet. I was allowed to have the random indulgent meal or the occasional beer. That helped a lot, because film shoots are long and a bit of good food or drink can go a long way toward your happiness.

12 Most Badass Fight Scenes of the Millennium
Celebrating the first 12 years of the millennium with 12 kickass fight scenes.

I kept the axes and hatchets close to me, because you need those when you’re fighting 300 soldiers. There were months before filming where we were able to work with the weapons from hatchets to spears. Magnus and I tried to incorporate a lot of that into our training in the gym—working with weights that stimulated the same muscle groups as those weapons. There was even a second sword made so I could train with it during our sessions. During a part of the film, my character is enslaved on a Viking farming community, so we did a lot of training to mimic the manual labor he was forced to do on that farm. I was lugging big pieces of rock around. Doing that sort of training felt very purposeful.

The battle sequences in The Northman are epic, and done mostly in long shots with continuous action. How hard were those scenes to film?

They were really, really difficult. The style of shooting that we were utilizing for this film was very specific and precise—with no cuts or stopping. So the battle scenes were these long takes, which is challenging because there’s so much that can go wrong, and if something does you have to start from the beginning. Most movies do inserts or camera changes to substitute a new shoot when there’s a mess up, but we weren’t working with that safety net. Those warfare fight sequences that were three minutes long had to be executed perfectly. The experience was grueling and completely exhausting—but worth it in the end.

The Northman is now playing in theaters.