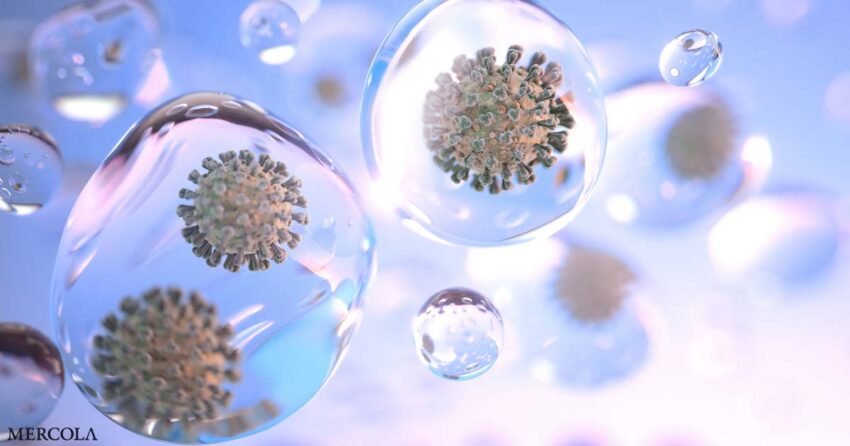 It was March 28, 2020, when the World Health Organization — the supposed global authority on infectious disease — tweeted, “FACT: #COVID19 is NOT airborne.”1 The statement included a “fact check” box, authoritatively stating that information circulating on social media that COVID-19 is airborne is “incorrect” and “misinformation.”

“The virus that causes COVID-19 is mainly transmitted through droplets generated when an infected person coughs, sneezes, or speaks,” the WHO wrote. “These droplets are too heavy to hang in the air. They quickly fall on floors or surfaces.”2

Their advice to best protect yourself at the time — again, this is coming from what is supposed to be the world leader on health — was to keep a 1-meter (3.2 feet) distance from others, disinfect surfaces, wash your hands and avoid touching your eyes, mouth and nose.

There was no hint that, perhaps, the science wasn’t actually settled on how SARS-CoV-2 is transmitted. No mention that the virus might be aerosolized and capable of traveling long distances through the air. Nothing about the importance of proper ventilation and air filters. But then, nearly two years after the pandemic began, WHO quietly changed its tune December 23, 2021.

WHO Finally Admits SARS-CoV-2 Is Airborne

In a monumental move that should have made front-page news, the WHO finally acknowledged that SARS-CoV-2 is airborne. On their “Coronavirus disease (COVID-19): How is it transmitted?” webpage, updated December 23, 2021, it’s now stated:3

“The virus can spread from an infected person’s mouth or nose in small liquid particles when they cough, sneeze, speak, sing or breathe. Another person can then contract the virus when infectious particles that pass through the air are inhaled at short range (this is often called short-range aerosol or short-range airborne transmission) or if infectious particles come into direct contact with the eyes, nose, or mouth (droplet transmission).

The virus can also spread in poorly ventilated and/or crowded indoor settings, where people tend to spend longer periods of time. This is because aerosols can remain suspended in the air or travel farther than conversational distance (this is often called long-range aerosol or long-range airborne transmission).”

“It was a relief to see them finally use the word ‘airborne’, and to say clearly that airborne transmission and aerosol transmission are synonyms,” aerosol chemist Jose-Luis Jimenez at the University of Colorado Boulder told Nature.4

Still, how is it possible that the WHO took years to update this pertinent piece of information, which has massive implications for public health, when scientists knew of SARS-CoV-2’s airborne potential since the beginning?

According to one investigation, “Interviews conducted by Nature with dozens of specialists on disease transmission suggest that the WHO’s reluctance to accept and communicate evidence for airborne transmission was based on a series of problematic assumptions about how respiratory viruses spread.”5

Whether the WHO was truly ignorant about basic science behind viral transmission, or found it difficult to shift its position publicly after stating, as fact, that SARS-CoV-2 is not airborne, is unknown. But either way, it calls into question why the WHO continues to be regarded as a global health authority. There were red flags at the WHO from the start, Nature reported.6

“WHO dismissed field epidemiology reports as proof of airborne transmission because the evidence was not definitive, something that is difficult to achieve quickly during an outbreak.

Other criticisms are that the WHO relies on a narrow band of experts, many of whom haven’t studied airborne transmission, and that it eschews a precautionary approach that could have protected countless people in the early stages of the pandemic.

Critics say that inaction at the agency led to national and local health agencies around the world being similarly sluggish in addressing the airborne threat. Having shifted its position incrementally over the past two years, the WHO also failed to adequately communicate its changing position, they say.”

“The preponderance of scientific evidence supports that aerosols play a critical role in the transmission of SARS-CoV-2. Years of dose response studies indicate that if anything gets through, you will become infected. Thus, any respiratory protection respirator or mask must provide a high level of filtration and fit to be highly effective in preventing the transmission of SARS-CoV-2.”

July 2020 marked the first time that the WHO acknowledged that short-range aerosol transmission in certain areas, namely crowded, inadequately ventilated indoor spaces over a prolonged period of time, “cannot be ruled out.”9 However, months earlier, in March 2020, Morawska and dozens of colleagues emailed two leaders at the WHO about their belief that SARS-CoV-2 was airborne.

Just days later, a video conference was held and Morawska presented evidence for their case, including cases of people becoming infected when they were more than 1 meter from an infected person, and “years of mechanistic studies” showing that mucus can become aerosolized when people talk and the aerosols can “accumulate in stagnant rooms.”10

The advice was largely ignored, with the WHO instead taking the advice of the Infection Prevention and Control Guidance Development Group (IPC GDG) — a group that advises the WHO on how to contain infections, particularly in hospitals. At the time, no one in the IPC GDG had studied airborne disease transmissions. Critics suggest the group was biased due to their medical training and medical dogma about how most respiratory diseases spread. According to the Nature Report:11

“These biases led the group to discount relevant information — from laboratory-based aerosol studies and outbreak reports, for instance. So the IPC GDG concluded that airborne transmission was rare or unlikely outside a small set of aerosol-generating medical procedures, such as inserting a breathing tube into a patient.”

WHO is supposed to be an “expert” when it comes to protecting public health. But the organization was clueless when it came to letting the public know how SARS-CoV-2 was transmitted. As of October 2020, they had quietly updated their advice to state that aerosol transmission could occur outside of medical facilities, such as in restaurants, choir practices, fitness classes, nightclubs, offices and places of worship.12

But it would still be more than a year before they updated their official advice to clearly state that SARS-CoV-2 is airborne. Meanwhile, by January 2021, Morawska and colleagues — not giving up — had published (online) an article in The Journal of Hospital Infection dismantling myths on the airborne transmission of SARS-CoV-2.13

“There is little doubt that SARS-CoV-2 is transmitted via a range of airborne particle sizes subject to all the usual ventilation parameters and human behavior,” they stated, adding that at least two research groups had also detected infectious SARS-CoV-2 viruses in aerosol samples from hospital patients’ rooms.14 The article clearly laid out the following:15

“There is mounting evidence to support the presence and transmissibility of SARS-CoV-2 through inhalation of airborne viruses. Exposure to small airborne particles is equally, or even more, likely to lead to infection with SARS-CoV-2 as the more widely recognized transmission via larger respiratory droplets and/or direct contact with infected people or contaminated surfaces.”

The implications for infection control are many, and they recommended targeting airborne transmission to help limit the risk of transmission indoors, something WHO largely overlooked throughout the pandemic:16

“[T]he existing evidence is sufficiently strong to warrant engineering controls targeting airborne transmission as part of an overall strategy to limit the risk of infection indoors.

These would include sufficient and effective ventilation, possibly enhanced by particle filtration and air disinfection; and the avoidance of systems that recirculate or mix air. Opening windows, subject to thermal comfort and security, provides more than a gesture towards reducing the risk of infection from lingering viral particles.”

In May 2021, a U.S. Centers for Disease Control and Prevention study revealed the importance of simple steps like improving ventilation. The study compared the incidence of COVID-19 in Georgia kindergarten through grade 5 schools that were open for in-person learning in fall 2020 with various recommended prevention strategies, such as mandatory masks and improvements to ventilation.17

After adjusting for county-level incidence, the study revealed that COVID-19 incidence was 39% lower in schools that improved ventilation.18 Dilution methods, which work by diluting the number of airborne particles, include opening windows and doors or using fans. This led to a 35% lower incidence of COVID-19, while methods to filter airborne particles, such as using HEPA filtration systems with or without ultraviolet germicidal irradiation, led to a 48% lower incidence.

If SARS-CoV-2 weren’t airborne, these measures would not have such a significant effect. It’s noteworthy to point out that, on September 18, 2020, the CDC posted updated COVID-19 guidance on its “How COVID-19 Spreads” page that, for the first time, mentioned aerosol transmission of SARS-CoV-2, saying “this is thought to be the main way the virus spreads.”19

The CDC then deleted the mention of aerosols and the possibility of spread beyond 6 feet the following Monday, September 21, 2020, saying a draft version of proposed changes had been posted “in error.”20

Fauci Says COVID Is Permanent, Risk Is Up to You

In an interview with ABC News, Dr. Anthony Fauci, director of the National Institute of Allergy and Infectious Diseases, made it clear that COVID-19 is here to stay. “This is not going to be eradicated and it’s not going to be eliminated. And what’s going to happen is that we’re going to see that each individual is going to have to make their calculation of the amount of risk that they want to take …”21

It’s a stark change from earlier in the pandemic, when we were told that COVID-19 shots would end the pandemic by preventing infection and stopping transmission, and provide foolproof protection against COVID-19. Now that it’s clear the shots don’t prevent COVID-19 infection or transmission of SARS-CoV-2, Fauci has changed his tune, saying that individuals are pretty much on their own to figure out what’s too risky and what’s not.

“It’s going to be a person’s decision about the individual risk they’re going to take …” Fauci said, adding again later, “Again, each individual will have to [m]ake their own determination of risk.”22

In most cases, public officials and health agencies won’t admit they were wrong. Instead, they’ll slowly distance themselves from the questionable statement, which is what WHO did. In order to save face, it gradually shifted its advice from claiming that SARS-CoV-2 is not airborne to finally acknowledging that it is.

On March 23, 2022, Alondra Nelson, head of the White House Office of Science and Technology Policy, also stated, “The most common way COVID-19 is transmitted from one person to another is through tiny airborne particles of the virus hanging in indoor air for minutes or hours after an infected person has been there.”23

Toward that end, she shared how to make indoor environments safer by filtering or cleaning air and using effective ventilation, including by simply opening a window — straightforward, practical advice that WHO should have been providing all along.