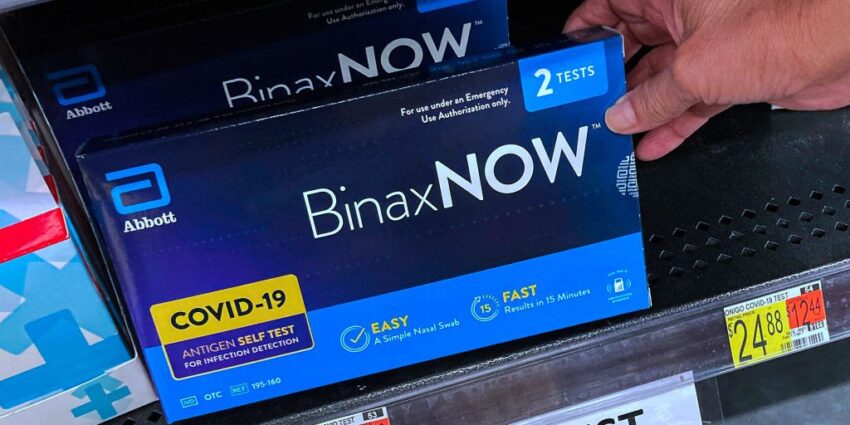 By official counts, fewer people are being diagnosed with COVID-19 right now than at almost any other point during the pandemic. There were an average of 40,000 new cases per day as of April 19, compared to more than 800,000 per day at the height of the U.S. Omicron wave.

But official counts are increasingly misleading. More Americans than ever are testing positive on at-home tests—the results of which are rarely reported to public-health authorities, and are thus missing from official tallies. Public-health experts worry that case numbers are now an unreliable way to judge the state of the pandemic, and that there are countless more infections than statistics show.
[time-brightcove not-tgx=”true”]

Under the CARES Act, COVID-19 testing sites are required to report results to public-health departments. The results of proctored remote tests—which are sometimes required for activities including travel and involve a health professional supervising the test over video—are usually reported, too. But individuals aren’t required to report the results of their standard home tests. Some state health departments, like those in Colorado and Washington, collect self-reported data. Others, like Massachusetts, defer to local health departments. But in many places, there’s no established system.

The CDC recommends that people share their positive results with their health care provider, who may in turn recommend a laboratory test to confirm the result and add it to official tallies. But many people don’t tell their doctors they’ve had a positive rapid test—25% of American adults don’t even have a primary care doctor, according to one study—and some doctors don’t bother recommending a secondary test. About 30% of people who tested positive for COVID-19 via a DIY diagnostic did not get a confirmatory test and thus probably weren’t counted, according to a January survey from the COVID States Project.

That may help explain why overall laboratory testing volume declined from more than 2 million tests per day in January to around half a million per day in mid-April—along with the closure of some mass testing sites, the end of free testing programs for people who are uninsured, and the nationwide relaxation of pandemic precautions.

In some respects, it’s surprising that so many people do get another test after getting a positive result at home. David Lazer, co-author of the COVID States Project survey and a professor of political and computer sciences at Northeastern University, says he was surprised by his group’s findings; he expected more than 30% of people to skip the secondary test. At this point in the pandemic, he suspects that the real number is higher, since people are increasingly comfortable with at-home tests and it’s growing harder to find free testing sites.

“There’s every reason to believe that the missingness is much, much larger now than it was in January,” Lazer says.

That’s a problem, health experts agree. Along with wastewater surveillance and hospitalization rates, testing data is one of the major ways public health officials track the virus’ spread and look for potential surges and hotspots. Agencies including the CDC have said measures like mask mandates can be applied fluidly depending on current transmission patterns in a given area. But if health officials don’t have an accurate picture of where the virus is spreading, they won’t be able to use appropriate mitigation strategies.

A national reporting system for home-test data could help solve that problem—but the question is how to make one work, and whether it’s the best use of increasingly strained public-health resources.

The mixed blessing of home tests

Dr. Michael Mina, chief science officer at the remote testing company eMed, has long argued that rapid tests are crucial to controlling the pandemic. Quickly swabbing before travel or social events, for example, can prevent people from unknowingly infecting others. It’s great that people are finally using self-tests regularly, Mina says, but it’s time to better track the resulting data.

“Two years ago, I was pushing for at-home tests regardless of reporting, out of this massive urgency and need” for better prevention tools, he says. “Now, we’ve had two years to catch up.”

The need for better tracking is clear. During the Omicron wave, about 20% of people in the U.S. who had COVID-like symptoms used an at-home test, according to CDC data. Now, people are testing at home more than ever. For the first time during the pandemic, more people tested positive on at-home tests than other types of tests during the week ending April 16, according to new data from researchers at Boston Children’s Hospital and survey company Momentive (which has not yet been published in a peer-reviewed journal). About 58% of the positive cases reported by the 474,000 people surveyed were picked up by an at-home test.

Many at-home test kits include a way to voluntarily report results to the manufacturer, often by downloading an app; the company may then choose to share the results with public-health officials. But few people use that option. Through a pilot program run by the CDC and the U.S. National Institutes of Health, more than 1.4 million DIY tests were distributed to households in Tennessee and Michigan in 2021—but fewer than 10,000 test results were later logged in a companion app, according to an article in Health Affairs.

Similarly, only about 5,700 people have reported a positive result through Washington State’s hotline since August 2021, a health department representative told TIME. That, too, represents a tiny fraction of the tests taken during that time frame; during the peak of the Omicron surge, the state was recording thousands of cases every day.

The search for a better system

It would be technologically easy for the CDC or another U.S. government agency to build a website where users could quickly log their at-home diagnoses. Brownstein’s research group already runs such a website to “put the ‘public’ back in public health,” he says. Crowdsourcing data benefits individuals as well as researchers, because “you get a disease weather map, where you can understand what’s going on and make decisions for yourself and your family.”

But using that approach to inform federal statistics is risky, Lazer says, because a couple of “bad apples” could choose to falsely report many cases and skew the data. And without knowing how many total tests have been taken, it’s hard to know the significance of the few results that are reported, Mina says. (Brownstein, however, thinks there’s value in a national surveillance site, even without 100% participation. “Not many people [write Amazon reviews], but there are enough people who are willing to give you a sense of the value of a product,” he says.)

For more people to opt in to a reporting system, they would need a reason beyond being a “Good Samaritan,” Mina says. His company, eMed, is trying to incentivize self-reporting. After someone uses an eMed-compatible home test, the company generates a lab report that is shared with public-health departments. That also benefits the individual, Mina says, because they can use the report to be cleared for travel, work, or school if they’re negative. If they’re positive, they have proof of that result and will be connected by telemedicine to a doctor who can prescribe treatment. Those may be better motivators for the average person than simply contributing to statistics, Mina says.

Public-health officials should also take advantage of existing tools by working with diagnostics companies to make their self-reporting systems easier and more accessible, Brownstein says. Instead of downloading an app, for example, people could send in their results via text message.

Another option, Lazer says, would be to conduct repeated, large surveys of American households, asking if anyone in the home recently tested positive for COVID-19 and, if so, on which type of test.

A problem bigger than self tests

To Beth Blauer, executive director of the Centers for Civic Impact at Johns Hopkins University and an expert on government data systems, the data problem in the U.S. involves more than at-home tests. Two years into the pandemic, states still don’t have a standardized way of collecting and assessing the test results they get from testing sites, which means federal case and testing data is flawed even before considering the missing data from unlogged rapid tests, she says.

The situation is especially bad now that some public testing sites are shutting down and uninsured people can no longer get tested for free, Blauer adds. Some people might test at home instead, but many won’t. Data show that home testing is most common among those who are fairly young, white, highly educated, and wealthy—perhaps unsurprising, given that each test costs about $10. Many people, especially those from underserved communities, simply won’t get tested if they can’t get a free diagnostic through work, school, or a convenient public test site, Blauer says, which means many cases will never be detected.

“If COVID has taught us anything, it’s that we have to be much more agile in the way that we dial up and dial down public-health interventions,” Blauer says. “As we dilute that data, it becomes harder and harder to be agile.”

Finding ways to include at-home test data in official case counts could make a dent in that problem. But that will only work if everyone has access to at-home tests and knows what to do with the information they reveal, says Benjamin Rader, a graduate research fellow at Boston Children’s Hospital.

“When we try to create a comprehensive surveillance system, it’s imperative that we make sure we’re reaching everyone in society,” Rader says. “We need to make sure we’re doing things to target everyone and not miss pockets of the U.S.”