When You Cook with This, Toxic Compounds Are Released 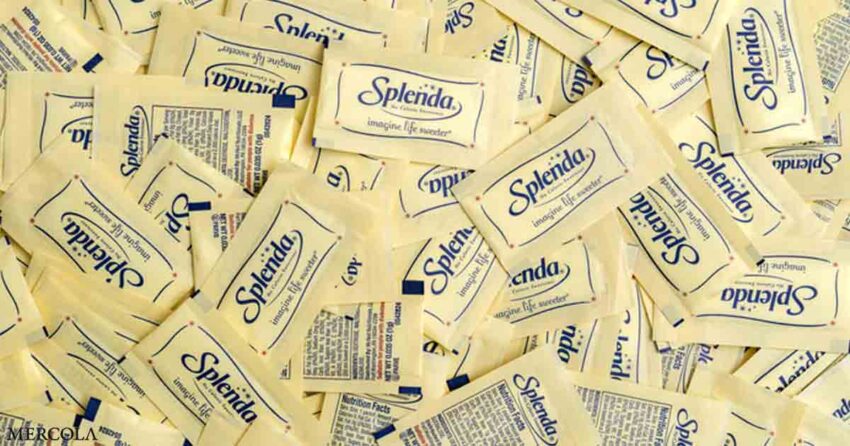 This article was previously published May 8, 2019, and has been updated with new information.

For example, research2,3 published in the online version of the Journal of Toxicology and Environmental Health August 21, 2018, shows sucralose — sold under brand names such as Splenda, Splenda Zero, Zero-Cal, Sukrana, Apriva, SucraPlus, Candys, Cukren and Nevella — is metabolized and accumulates in fat cells.

Remarkably, artificial sweeteners have become so ubiquitous, research4 published in the April 2019 issue of Ecotoxicology and Environmental Safety refers to them as an “emerging” environmental contaminant, noting they have “high water persistence.”

“Overall, the quantitative findings suggested that the occurrence of non-nutritive artificial sweeteners is present in surface water, tap water, groundwater, seawater, lakes and atmosphere,” the paper states. What the ultimate ramifications for wildlife, especially marine life, and human health might be are still anyone’s guess.

As explained in the 2016 paper,5 “Metabolic Effects of Non-Nutritive Sweeteners,” many studies have linked artificial sweeteners to an increased risk for obesity, insulin resistance, Type 2 diabetes and metabolic syndrome. This is in stark contrast to what you’re told by industry, which continues to promote artificial sweeteners as a way to lower your risk of those conditions.

1. They interfere with learned responses that contribute to glucose control and energy homeostasis — Studies have demonstrated that when sweet taste and caloric intake are mismatched, your body loses its ability to properly regulate your blood sugar.

2. They interact with sweet-taste receptors expressed in digestive system that play a role in glucose absorption and trigger insulin secretion, thereby inducing both glucose intolerance and insulin resistance, which raises your risk of obesity. Sweet taste without calories also increases appetite6 and subjective hunger ratings.7

3. They destroy your gut microbiota — A 2008 study8 revealed sucralose (Splenda) reduced gut bacteria by as much as 49.8%, preferentially targeting bacteria known to have important human health benefits. Consuming as few as seven little Splenda packets may be enough to have a detrimental effect on your gut microbiome.

More recent research,9 published in the journal Molecules in October 2018, confirmed and expanded these findings, showing that all currently approved artificial sweeteners (aspartame, sucralose, saccharin, neotame, advantame and acesulfame potassium-k) disrupt the gut microbiome — in part by damaging the bacteria’s DNA, and in part by interfering with their normal activities.

Another 201810 found Splenda consumption may exacerbate gut inflammation and intensify symptoms in people with Crohn’s disease by promoting harmful gut bacteria. These results echoed those published in 2014,11 where they found Splenda may exacerbate symptoms of Crohn’s disease by augmenting “inflammatory activity at the biochemical level” and altering microbial-host interactions within the intestinal mucosa.

Similarly, research12 published in 2017 implicated sucralose in chronic liver inflammation by altering “the developmental dynamics of the gut microbiome.”

Why You Should Never Cook With Splenda

Splenda (sucralose) is frequently recommended for cooking and baking,13 and is often used in processed foods in which high heat was involved. This, despite the fact that scientists have warned about the dangers of heating sucralose for years.

In the 2013 paper,14 “Sucralose, a Synthetic Organochloride Sweetener: Overview of Biological Issues,” the authors state that “Cooking with sucralose at high temperatures … generates chloropropanols, a potentially toxic class of compounds.” This paper also warns the acceptable daily intake set for sucralose may in fact be hundreds of times too high to ensure safety.

The German Federal Institute for Risk Assessment (BfR) recently issued a report15 on the available data on sucralose, confirming that cooking with sucralose is likely a terrible idea, as chlorinated compounds are formed at high temperatures. As reported by MedicalXpress:16

“When sucralose (E 955) is heated to temperatures higher than 120 degrees C a gradual — and with further continuously increasing temperature — decomposition and dechlorination of the sweetener occurs.

Temperatures of between 120 degrees C [248 degrees Fahrenheit] and 150 degrees C [302 degrees F] are possible during industrial manufacturing and processing of foods, and are also reached in private households during cooking and baking of foods containing sucralose.

This may lead to the formation of chlorinated organic compounds with a health-damaging potential, such as polychlorinated dibenzo-p-dioxins (PCDD), dibenzofurans (PCDF) and chloropropanols.”

Chloropropanols, while still poorly understood, are believed to have adverse effects on your kidneys and may have carcinogenic effects.17 One good reason to be suspicious of chloropropanols is because they’re part of a class of toxins known as dioxins, and dioxins are known to cause cancer and endocrine disruption.

The fact that sucralose creates toxic dioxins when heated is also a concern for those who use vaping liquid containing this artificial sweetener. A 2017 study18 found sucralose contributes sweet taste only when used in a cartridge system, and chemical analysis showed the use of a cartridge system also raised the concentration of sucralose in the aerosol.

I find it interesting that these studies are now confirming what I suspected and published in my book, published over 10 years ago — “Sweet Deception” — which was an expose on Splenda.

Sucralose Shown to Have Carcinogenic Potential

Research19 published in 2016 in the International Journal of Occupational and Environmental Health tested the carcinogenic potential of sucralose by adding it to mouse feed, at various concentrations, starting at 12 days of gestation and continuing throughout their natural life span.

Results showed male mice experienced a significant dose-related increase in malignant tumors and hematopoietic neoplasias (cancer of the blood, bone marrow and the lymphatic system). The dosages tested were 0, 500, 2,000, 8,000 and 16,000 parts per million (ppm). The worst results occurred in males given 2,000 ppm and 16,000 ppm. According to the authors:

“These findings do not support previous data that sucralose is biologically inert. More studies are necessary to show the safety of sucralose, including new and more adequate carcinogenic bioassay on rats. Considering that millions of people are likely exposed, follow-up studies are urgent.”

More recent research,20 published in 2018, revealed the artificial sweeteners sucralose and acesulfame-potassium transfer into breast milk — a crucial fact that pregnant women need to be mindful of, considering the harmful effects of these compounds. To determine whether the sweeteners could transfer into breast milk, the researchers enrolled 34 women who were exclusively breastfeeding.

Each of the women drank 12 ounces of Diet Rite Cola, which contains 68 milligrams (mg) of sucralose and 41 mg of acesulfame-potassium, before breakfast. Habitual use of artificial sweeteners was also assessed via a diet questionnaire. Breast milk samples were collected before ingestion and every hour thereafter for six hours. As reported by the authors:

“Owing to one mother having extremely high concentrations, peak sucralose and acesulfame-potassium concentrations following ingestion of diet soda ranged from 4.0 to 7387.9 ng/mL and 299.0 to 4764.2 ng/mL, respectively.”

This is believed to be the first time researchers have demonstrated that infants are in fact exposed to artificial sweeteners even when exclusively breastfed (if the mother consumes them). An accompanying commentary21 by pediatric experts notes:

“NNS [non-nutritive sweeteners] were present in the breast milk of all subjects in physiologically significant amounts, and … at concentrations well above the taste thresholds. Why is this important?

NNS or non-caloric artificial sweeteners (NCAS) are ubiquitous in the modern diet … Despite the approval by the FDA and European Food Safety Authority, concerns, admittedly largely unproven, persist about their safety … The concerns about NNS are three-fold.

All of these concerns are magnified with early exposure in life. The evidence to support these concerns is either inductive or based on experimental models and emerging human data.”

‘Diet’ Beverages Linked to Risk of Stroke and Heart Attack

Another 2018 study22 by the American Heart Association (AHA) found that, compared to drinking none or just one “diet” drink per week, women over 50 who drank two or more artificially sweetened beverages per day had a:23

The risk is particularly high for women with no previous history of heart disease, those who are obese and/or African-American women. The study included more than 81,714 women from the Women’s Health Initiative Observational Study, a longitudinal study of the health of 93,676 postmenopausal women between the ages of 50 and 79. The mean follow-up time was close to 11.9 years. According to the authors:

“In women with no prior history of cardiovascular disease or diabetes mellitus, high consumption of ASB [artificially-sweetened beverages] was associated with more than a twofold increased risk of small artery occlusion ischemic stroke … High consumption of ASBs was associated with significantly increased risk of ischemic stroke in women with body mass index ≥30 …”

In an accompanying editorial,24 “Artificial Sweeteners, Real Risks,” Hannah Gardener, assistant scientist in the department of neurology at the University of Miami, and Dr. Michell Elkind at Columbia University, suggest drinking pure water instead of no-calories sweetened beverages, as it is by far the safest and healthiest low-calorie drink there is.

If you want some flavor, just squeeze a little bit of fresh lemon or lime into mineral water. In instances where your cooking, baking or beverage needs a little sweetener, be mindful of your choice.

Other recent research25 published in the journal Morphologie found sucralose caused “definite changes” in the liver of treated rats, “indicating toxic effects on regular ingestion.” The researchers warn these findings suggest sucralose should be “taken with caution to avoid hepatic damage.”

In other words, regularly using Splenda could damage your liver. Here, adult rats were given a much higher (yet nonlethal) oral dose of sucralose — 3 grams (3,000 mg) per kilo body mass per day for 30 days, after which the animals’ livers were dissected and compared to the livers of unexposed controls. According to the authors:

“Experimental rats showed features of patchy degeneration of hepatocytes along with Kupffer cells hyperplasia, lymphocytic infiltration, sinusoidal dilatation and fibrosis indicating a definite hepatic damage on regular ingestion of sucralose. Sinusoidal width was also found to be increased in experimental animals as compared to controls.”

Sucralose Safety Has Been Repeatedly Questioned

As of April 12, 2022, there are 21,800 references to sucralose in the scientific search engine Google Scholar, so there’s no shortage of studies to review if you’re curious. Here’s a small sampling of papers raising questions about the safety of this artificial sweetener.

Two of the best sugar substitutes are Stevia and Lo Han Kuo (also spelled Luo Han Guo). Stevia, a highly sweet herb derived from the leaf of the South American stevia plant, is sold as a supplement. It’s completely safe in its natural form and can be used to sweeten most dishes and drinks.

Lo Han Kuo is similar to Stevia, but is my personal favorite. I use the Lakanto brand vanilla flavor which is a real treat for me. The Lo Han fruit has been used as a sweetener for centuries, and is about 200 times sweeter than sugar.

A third alternative is to use pure glucose, also known as dextrose. Dextrose is only 70% as sweet as sucrose, so you’ll end up using a bit more of it for the same amount of sweetness, making it slightly more expensive than regular sugar. But, it is safer than regular sugar, which is 50% fructose.

So, dextrose is well worth it for your health as it does not contain any fructose whatsoever. Contrary to fructose, glucose can be used directly by every cell in your body and as such is a far safer sugar alternative.