The Pandemic Exacerbates the ‘Paramedic Paradox’ in Rural America 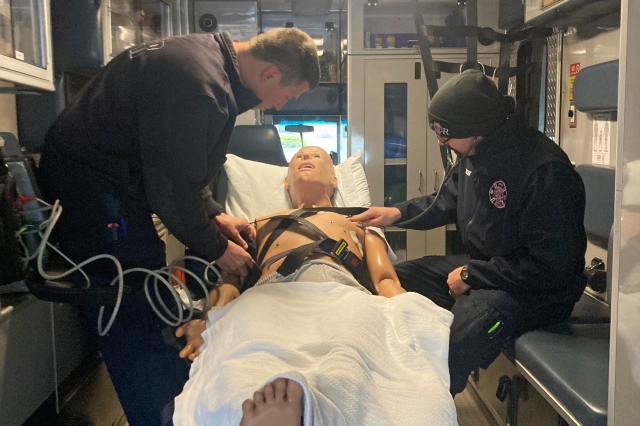 Even after she’s clocked out, Sarah Lewin keeps a Ford Explorer outfitted with medical gear parked outside her house. As one of just four paramedics covering five counties across vast, sprawling eastern Montana, she knows a call that someone had a heart attack, was in a serious car crash, or needs life support and is 100-plus miles away from the nearest hospital can come at any time.

“I’ve had as much as 100 hours of overtime in a two-week period,” said Lewin, the battalion chief for the Miles City Fire and Rescue department. “Other people have had more.”

Paramedics are often the most highly skilled medical providers on emergency response crews, and their presence can make a lifesaving difference in rural areas where health services are scarce. Paramedics are trained to administer specialized care from the field, such as placing a breathing tube in a blocked airway or decompressing a collapsed lung. Such procedures are beyond the training of emergency medical technicians.

But paramedics are hard to come by, and a long-standing workforce shortage has been exacerbated by turnover and resignations related to pandemic burnout.

Larger departments are trying to attract paramedics by boosting pay and offering hefty signing bonuses. But small teams in underserved counties across the U.S. don’t have the budgets to compete. Instead, some rural crews are trying to train existing emergency responders for the roles, with mixed results.

Miles City is among the few communities in rural eastern Montana to have paramedic-level services, but the department doesn’t have enough paramedics to offer that care 24/7, which is why medics like Lewin take calls on their time off. The team received a federal grant so four staffers could become paramedics, but it could fill only two slots. Some prospects turned down the training because they couldn’t balance the intense program with their day jobs. Others didn’t want the added workload that comes with being a paramedic.

“If you’re the only paramedic on, you end up taking more calls,” Lewin said.

What’s happening in Miles City is also happening nationwide. People who work in emergency medical care have long had a name for the problem: the paramedic paradox.

“The patients who need the paramedics the most are in the more rural areas,” said Dia Gainor, executive director of the National Association of State EMS Officials. But paramedics tend to gravitate to dense urban areas where response times are faster, the drives to hospitals are shorter, and the health systems are more advanced.

“Nationally, throw a dart at the map, the odds are that any rural area is struggling with staffing, with revenue, with access to training and education,” Gainor said. “The list goes on.”

The Michigan Association of Ambulance Services has dubbed the paramedic and EMT shortage “a full-blown emergency” and called on the state legislature this year to spend $20 million to cover the costs of recruiting and training 1,000 new paramedics and EMTs.

At the beginning of this year, Colorado reactivated its crisis standard of care for short-staffed emergency medical service crews experiencing mounting demand for ambulances during a surge in covid cases. The shortage is such a problem that in Denver a medical center and high school teamed up to offer courses through a paramedic school to pique students’ interest.

In Montana, 691 licensed paramedics treat patients in emergency settings, said Jon Ebelt, a spokesperson for the Montana Department of Public Health and Human Services. More than half are in the state’s five most-populous counties — Yellowstone, Gallatin, Missoula, Flathead, and Cascade — covering a combined 11% of the state’s 147,000 square miles. Meanwhile, 21 of Montana’s 56 counties don’t have a single licensed EMS paramedic.

Andy Gienapp, deputy executive director of the National Association of State EMS Officials, said a major problem is funding. The federal Medicaid and Medicare reimbursements for emergency care often fall short of the cost of operating an ambulance service. Most local teams rely on a patchwork of volunteers and staffers, and the most isolated places often survive on volunteers alone, without the funding to hire a highly skilled paramedic.

If those rural groups do find or train paramedics in-house, they’re often poached by larger stations. “Paramedics get siphoned off because as soon as they have those skills, they’re marketable,” Gienapp said.

Gienapp wants to see more states deem emergency care an essential service so its existence is guaranteed and tax dollars chip in. So far, only about a dozen states have done so.

But action at the state level doesn’t always guarantee the budgets EMS workers say they need. Last year, Utah lawmakers passed a law requiring municipalities and counties to ensure at least a “minimum level” of ambulance services. But legislators didn’t appropriate any money to go with the law, leaving the added cost — estimated to be up to $41 per resident each year — for local governments to figure out.

Andy Smith, a paramedic and executive director of the Grand County Emergency Medical Services in Moab, Utah, said at least one town that his crew serves doesn’t contribute to the department’s costs. The team’s territory includes 6,000 miles of roads and trails, and Smith said it’s a constant struggle to find and retain the staffers to cover that ground.

Smith said his team is lucky — it has several paramedics, in part because the nearby national park draws interest and the ambulance service has helped staffers pay for paramedic certification. But even those perks haven’t attracted enough candidates, and he knows some of those who do come will be lured away. He recently saw a paramedic job in nearby Colorado starting at $70,000, a salary he said he can’t match.

“The public has this expectation that if something happens, we always have an ambulance available, we’re there in a couple of minutes, and we have the highest-trained people,” Smith said. “The reality is that’s not always the case when the money is rare and it’s hard to find and retain people.”

Despite the staffing and budget crunches, state leaders often believe emergency crews can fill gaps in basic health care in rural areas. Montana is among the states trying to expand EMS work to nonemergency and preventive care, such as having medical technicians meet patients in their homes for wound treatment.

A private ambulance provider in Montana’s Powder River County agreed to provide those community services in 2019. But the owner has since retired, and the company closed. The county picked up emergency services last year, and County Commissioner Lee Randall said that providing basic health care is on the back burner. The top priority is hiring a paramedic.

Advancing the care that EMT crews can do without paramedics is possible. Montana’s EMS system manager, Shari Graham, said the state has created certifications for basic EMTs to provide some higher levels of care, such as starting an IV line. The state has also increased training in rural communities so volunteers can avoid traveling for it. But those steps still leave gaps in advanced life support.

“Realistically, you’re just not going to have paramedics in those rural areas where there’s no income available,” Graham said.

Back in Miles City, Lewin said her department may get an extension to train additional paramedics next year. But she’s not sure she’ll be able to fill the spots. She has a few new EMT hires, but they won’t be ready for paramedic certification by then.

“I don’t have any people interested,” Lewin said. For now, she’ll keep that emergency care rig in her driveway, ready to go.