The New Science of Forgetting 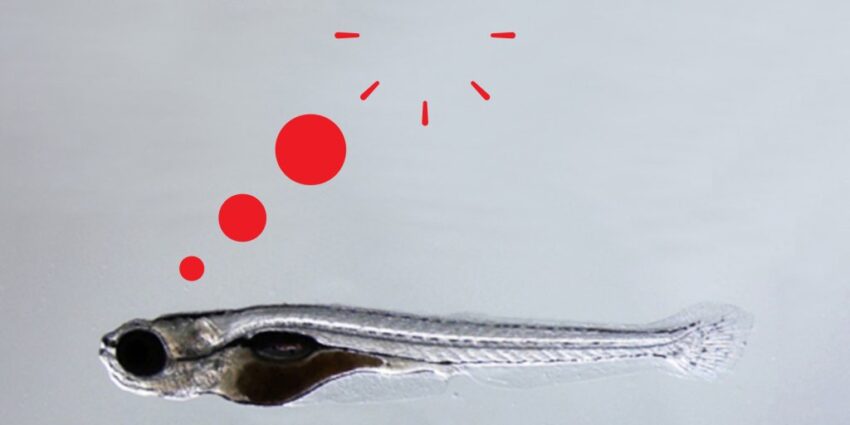 A baby zebrafish is just half the size of a pea. A recent look inside its transparent brain, however, offers clues to the far bigger mystery of how we remember—and how we forget.

In an experiment that yielded insights into memory and the brain, a team of researchers at the University of Southern California taught the tiny creature to associate a bright light with a flash of heat, a temperature change the fish responded to by trying to swim away. Using a custom-designed microscope, the team then captured images of the animals’ brains in the moments before and after they learned to associate the light and the heat. It’s the first known look at how a living vertebrate’s brain restructures itself as the animal forms a memory. 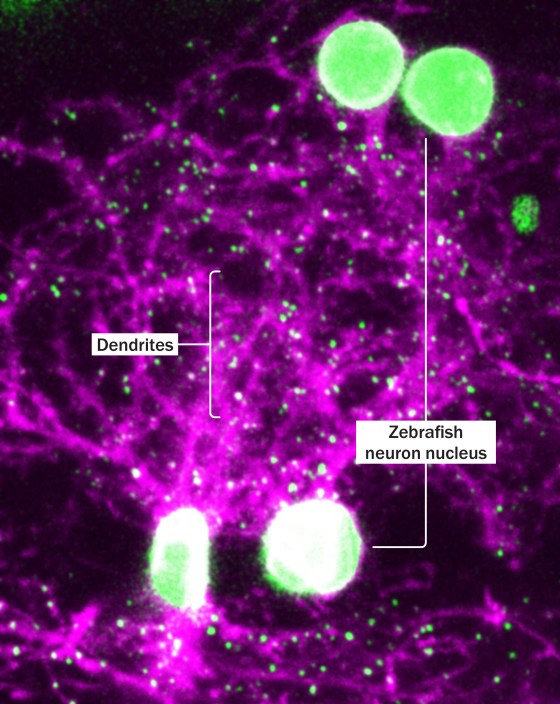 Zhuowei Du The brain of a living zebrafish larva. The small green and white dots represent synaptic connections prior to the training exercise.

In the image published with the team’s research, the event looks like a dissipating firework. A frenetic spattering of bright yellow dots represents new connections created between brain cells at the moment the memory formed. But the image also shows a second, parallel force at work in the animal’s brain as those connections are made. An overlapping sprinkle of bright blue dots indicates synaptic connections that disappeared at the same time the new ones formed, as if the components of earlier zebrafish memories were making way for the new arrival. 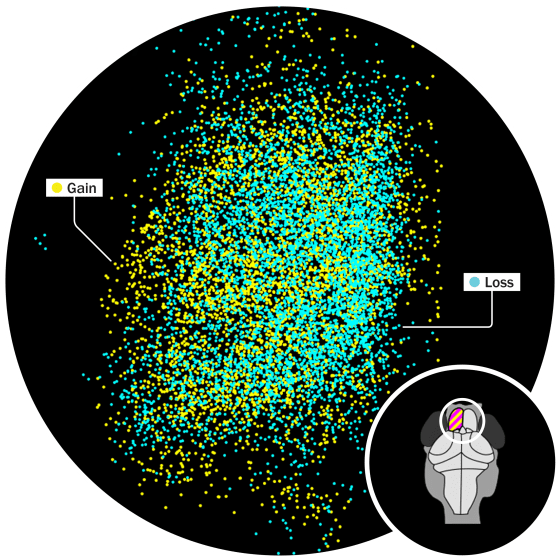 This glimpse into the mind of a zebrafish illuminates one of the most intriguing new fronts in science’s quest to understand the brain: the biology of forgetting.

We often experience forgetting as a frustration—the misplaced wallet, the name just on the tip of your tongue. And until fairly recently, the widely held convention in neuroscience was that forgetting was merely a glitch in the memory system. The brain’s job was to gather and store information, and the inability to retain or retrieve those memories was a failure of some neurological or psychological mechanism. Over the past decade or so, however, science has determined that forgetting is not just the failure of memory but its own distinct force.

“We were all taught forever, everyone, that forgetting is a passive breakdown of the memory mechanisms,” says Scott A. Small, a professor of neurology and psychiatry at Columbia University and author of the 2021 book Forgetting: The Benefits of Not Remembering. “The fundamental insight—the eureka, I think, of the new science of forgetting—is that our neurons are endowed with a completely separate set of mechanisms … that are dedicated to active forgetting.”

The brain forms memory with the help of a complex tool kit of neurotransmitters, proteins, and carbohydrates, as well as other cells, Small writes; forgetting, too, has its own set of dedicated molecular tools working to clear away what’s no longer relevant.

The mere existence of these neurobiological tools doesn’t prove that they’re useful; nature also gave us the appendix, and we’re still trying to figure out what the point of that one is. But a “constellation of findings” in recent years, Small says, indicates that culling the vast amount of information the brain collects and encodes is a necessary function of cognition—as essential for survival as the gathering of useful knowledge. And now that we know this culling function exists, some researchers are exploring the possibility that disruptions to forgetting could provide insights into complex psychological conditions like post-traumatic stress disorder.

After all, forgetting, says Oliver Hardt, an assistant professor of psychology at McGill University, is “one of the most fundamental aspects of a memory system. Without forgetting, nothing would work.”

The Nobel Prize–winning neuroscientist Eric Kandel, a professor of biochemistry and biophysics at Columbia University, established in the 1970s that changes in the chemical signals between neurons were the biological basis of all learning or memory making.

When neighboring brain cells, or neurons, are excited at the same time, neurotransmitter chemicals fire across the microscopic gap between the ends of the neurons’ spindly dendrites. This change in the synapse—the connection point—between neurons is what makes a memory. For transient short-term memories, that change is fleeting. The more a memory is revisited and repeated, however, the stronger and more enduring that change becomes. That’s true of all animals capable of learning, Kandel found, from humans to the humble zebrafish. (“Practice makes perfect,” Kandel said in his Nobel lecture, “even in snails.”)

Read more: How Social Media Is Hurting Your Memory

From an evolutionary perspective, the purpose of memory “is not to allow us to sit back and say, ‘Oh, do you remember that time?’” says Sheena Josselyn, a senior scientist at the Hospital for Sick Children, and a professor of psychology and physiology at the University of Toronto. “It really is to help us make decisions.”

Without forgetting, the evolutionary benefits of a strong memory would become redundant, says Hardt. In the course of a single day, the brain registers hundreds of thousands of bits of information, some of it relevant and much of it utterly inconsequential: the way your socks felt when you pulled them onto your feet, the shirt color of a stranger standing before you in the grocery-store line.

“You would have an endless amount of useless stuff accumulating there constantly,” Hardt says. “And each time you want to think about something”—something key to your survival, such as the location of food or the signs of an approaching predator—“all these memories would pop up that are completely meaningless and that make it hard for you to actually do the job of predicting what is next.”

Hardt is among the many scientists who suspect that this culling of nonessential memory is one of the key purposes of sleep. A good night’s sleep quite literally produces a clearer mind.

Josselyn and her spouse Paul Frankland run the Josselyn Frankland Neurobiology Lab at Toronto’s Hospital for Sick Children. Frankland’s research at the hospital has focused on the kind of forgetting that takes place in the hippocampus when new learning takes place—the corresponding gain and loss of neuronal connections that the zebrafish brain showed.

Frankland’s breakthrough in forgetting came while he was studying neurogenesis, or the formation of new brain cells, in mice. A graduate student noticed that the more quickly new neurons formed in the animal’s hippocampus, the less likely the animal was to recall some older memories. Mice with more brain cells learned new mazes faster, but they were also more likely to forget the layouts of previous mazes they had mastered before their brain growth.

Frankland has theorized that’s why it’s so difficult for people to remember events from early infancy, a time of exponential neural development. In this model, forgetting in the hippocampus isn’t a zero-sum, one-for-one replacement of knowledge, so much as an ongoing reconfiguring of memory so that more recent (and likely, more useful) information is available more readily. “The world changes,” Frankland says, “and so the more recent things are more relevant to remember to predict the future than the more distant things.”

Just as the brain’s cells and circuits distinguish between long- and short-term memory, there also appears to be a distinction between memories that have decayed beyond the possibility of retrieval and what researchers call “transient” forgetting—the temporary (if deeply irritating) inability to recall a piece of learned information.

Read more: Why People With Anxiety May Have Better Memories

Studies in fruit flies, most notably in the Scripps Research Institute lab of neuroscience professor Ronald L. Davis, have identified dopamine as a key factor in the animals’ ability to learn and forget. Last year, the lab found a dopamine-releasing circuit in the flies’ brains linked to transient forgetting. Flies that had been taught to associate a particular odor with a shock to their feet seemed to forget what they’d learned when distracted by stimuli like blue light or a puff of air. This temporary loss of memory was accompanied by the release of dopamine from a particular set of cells onto the cells thought to hold memory.

If fruit flies have a mechanism that temporarily suppresses some memories, it stands to reason humans do too. “Forgetting may be the basal state of the brain. We are inundated with so much information on a daily basis that the brain fights back and says, ‘I can’t handle this. I need to forget as much of the unimportant information as possible,’” Davis says. “The brain is designed to slowly erase information that’s coming in on a daily basis unless consolidation says, OK, this memory is important. And so it overrides the forgetting mechanism.”

As the neuroscience of forgetting emerges, some researchers are questioning whether the mechanisms that regulate forgetting might also hold valuable clues to other mysteries of cognitive and behavioral health. In his book, Small points to a few key areas in which the neuroscience of forgetting might point the way to other breakthroughs. One area of interest is autism. In one 2016 study, when a protein associated with forgetting was inhibited in fruit flies, those that had been modified to contain genes linked to autism demonstrated “behavioral inflexibility,” or difficulty adopting new patterns of behavior. The aversion to excess stimuli that some people with autism spectrum disorder show, Small says, could be the result of a brain unable to let go of unessential inputs.

Post-traumatic stress disorder, likewise, could be the result of an injury to the forgetting function. One theory is that PTSD develops as a result of an overgrowth of synaptic connections in the amygdala, the part of the brain that acquires and stores fear memories, after intense or repeated exposure to a frightening stimulus. Early studies show that drugs that accelerate the loss of fear memories—most notably, MDMA—could be effective in treating the symptoms of people with PTSD.

The memory loss associated with Alzheimer’s disease and other forms of dementia ranges far beyond the kind of routine forgetting that takes place in a healthy brain. Yet understanding the minute physical processes behind the undoing of memory could help researchers understand more about this most painful symptom of the disease, and maybe even find ways to slow or stop it.

“Perhaps we need to understand the forgetting process, how that works, why it is there, in order to find a better way to address it if it goes out of control,” Hardt says.

Several researchers interviewed for this piece referenced the Jorge Luis Borges short story “Funes the Memorious” to illustrate forgetting’s role in how we navigate the world.

An injury sustained in a riding accident leaves the title character with a chronic inability to forget anything at all. Funes learns multiple languages with ease and can cite millennial–long strings of historical facts—the kinds of things we think we’d do with infinite capacity for recall. But he’s miserable. Funes can’t let go of anything. He looks at a landscape and registers every leaf on the vines, every hair in a pony’s mane. He’s swamped by minute changes of age and expression each time he looks at another person’s face. Memories don’t comfort him; they only overwhelm. “My memory, sir, is like a garbage heap,” Funes tells the narrator.

Forgetting serves us well. It tunes out useless information so we can focus on the relevant. Without it, neither anger at a slight nor the pain of grief would fade; feelings of love and attraction would not either, making it impossible to move on from relationships. Memories build us, and forgetting chisels away the excess, shaping the way we see..