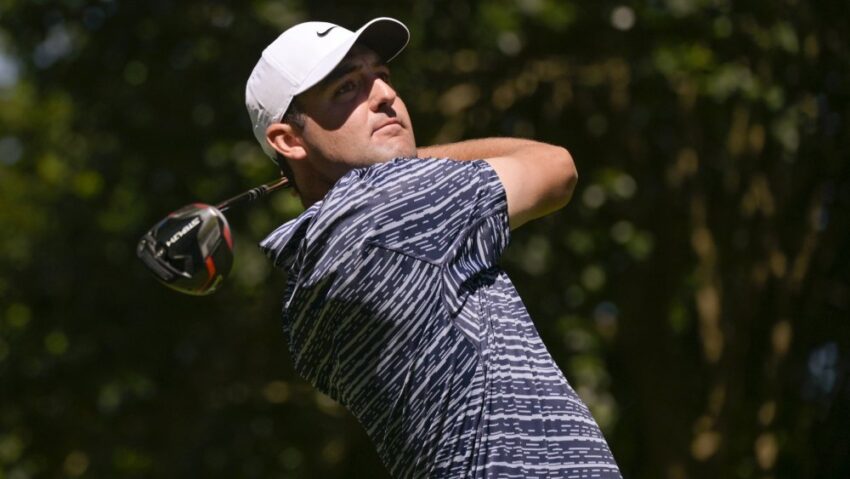 Scottie Scheffler won the 86th Masters Tournament on Sunday. By winning the Masters, Scheffler immortalized himself in major championship lore and put the exclamation point on a two-month run that began with his first PGA Tour win. Scheffler entered the tournament ranked No. 1 in the world, and and now he leaves with something even better: a green jacket.

The Masters 2022 was unusual in a few ways. One change was the cool weather for much of the tournament, which made for a different (and harder) golf course than the Masters usually presents. Another was the layout of the course itself: Augusta National Golf Club made significant alterations to the 11th and 15th holes ahead of this year’s tournament.

But the most unusual aspect of the tournament was the attention focused on a golfer who finished 47th and was never in contention to win. Tiger Woods’ return to competitive golf at the sport’s most iconic event understandably drew a lot of eyeballs; one of the most memorable moments of the week was the standing ovation Woods got on the 18th hole on Sunday. At the time, he was more than 20 strokes behind Scheffler. Professional golf is still Tiger’s world:

Here are three main takeaways from the Masters 2022.

1. Scottie Scheffler is on an all-time golf heater.

Scheffler is the world No. 1 today and will be next week, but that doesn’t mean he’ll keep the billing long. World Golf Ranking points come and go.

But there’s no doubt that in April 2022, nobody on the planet is playing the game as well as the 25-year-old University of Texas alum. Scheffler had already won three times this year: He won the WM Phoenix Open in February, the Arnold Palmer Invitational in early March, and the WGC-Dell Technologies Match Play at the end of March. Coincidentally, they were his first three wins as a professional, and they were all in exceedingly difficult events that draw most of the best players in the world. Scheffler beat everyone in them.

Nothing’s as big as the Masters, though. And while the world rankings are always changing, a Masters win is forever. Scheffler claimed that mantle by wrapping his week at 10 strokes below par and refusing to blink in the few instances where his lead tightened. He wound up three shots clear of the field, but his win somehow felt almost assured—to the point that when he missed a gimme putt on the final hole, he could laugh about it before tapping in for his fourth win in just 57 days. It’s an incredible achievement.

Scheffler had a three-stroke lead when he and his playing partner, Cameron Smith, strode up to the par-3 12th hole at Amen Corner. That hole, with a prominent water hazard guarding a pin located 155 yards away, has wrecked a lot of Sunday dreams over the years. This year’s victim was Smith, who dunked a 9-iron shot into Rae’s Creek and then airmailed his next shot over the green en route to a triple-bogey six. After that, Smith dropped to third behind Rory McIlroy. Scheffler made par to grow his lead over Smith to six and was on cruise control to the finish. (Also of note: McIlroy shot an absurd, Masters record-tying 64 on Sunday, ending with a hole-out from a bunker.)

Smith’s meltdown on the 12th hole was the effective clincher—McIlroy was too far behind and out of holes to catch up to Scheffler. The turning point in Scheffler’s favor, though, came earlier. Smith started his round with two birdies, trimming what had been a three-shot Scheffler lead to just one going into the third hole of the day. Their second shots settled almost exactly next to each other, short and left of the green. Smith failed to get up and down and made bogey, while Scheffler chipped in. That hole restored a three-shot lead, and Smith never got closer after that. McIlroy finished ahead of him in second place.

Cole Hauser on His Early Life, Yellowstone, and Being a Badass Read article

2. There are three takeaways from Tiger Woods’ week at Augusta.

Woods finished 47th at 13 strokes over par. His Saturday round of 78, marred by bad putting, was his highest-scoring round ever in this tournament. But that misses the point: He played on Saturday after making the cut amid one of the most packed fields in golf. After a debilitating injury and well over a year away from competitive play, Tiger stepped in cold and turned in a performance that’s respectable by anyone’s standards.

Second, Woods showed he can still execute incredible golf shots and hang with the best players on the planet. His driving distance averaged 291 yards, far from the top of the field but also far from the bottom. He hit several beauties over the week. My favorite was his approach shot on Augusta’s 10th hole on Friday: It started 208 yards from the hole and ended three feet from it, utilizing the same ball-stopping backspin Woods has flashed his whole career:

Tiger getting dialed in

Approach shot on the 10th is a foot from the hole

Third, Woods was a long way from the top of the Masters field on Saturday and Sunday. That’s not surprising, but it’s worth bringing up given the expectations he places on himself and that society echoes: He’s only playing in tournaments he thinks he can win. It takes time for any player to get their game into shape to win majors. That it was reasonable to think Woods could come in cold and contend anyway speaks to his exceptionalism.

His days playing a regular tour schedule are over. How he’ll manage his form leading up to majors will be a critical factor in trying to determine his chances. Looking ahead, he said he’ll at least play the British Open in July.

3. The Masters leaderboard was a microcosm of where men’s golf is heading.

It’s a young man’s game these days. Tiger Woods has a tendency to blot out everything else in golf, but the fact remains that most of the world’s best players are at the beginning of their careers. For a brief spell in March, the top five players in the Official World Golf Ranking were under 30. The two most dominant of those young players in the early part of the PGA Tour season, Scheffler and Smith, were the only two players with a chance on Sunday. McIlroy, the world No. 9, now qualifies as old at 32 years of age.

Smith, 28, won the Players Championship in March. At 25, Scheffler now has the Masters to go with his three other wins against deep fields. 23-year-old Joaquín Niemann, who isn’t quite on their level, won the ultra-difficult Genesis Invitational in February. The youngest players on tour are winning some of the most difficult events, and these players will continue to be favorites in the biggest tournaments for several years to come. Collin Morikawa, Jon Rahm, and Justin Thomas already have majors, as does a currently-not-good Bryson DeChambeau, who has been recovering from an injury. They’re all in their 20s, as are a few players who feel destined to win majors in the next few years: Viktor Hovland and Xander Schauffele.

And that’s just a sampling. There are many young, elite players doing their thing right now in professional golf. As a cohort, they will run this sport for a long time.