When Tanya Herasymova woke up on February 24 to the news that Russia had invaded Ukraine, her first thought was to get underground. If the Russian army began bombing her city Kamianske, close to the separatist region Donetsk, she would be at greater risk in her 4th floor apartment. But there was a problem: none of the city’s bomb shelters were accessible to wheelchair users, leaving Herasymova with nowhere to take cover.

“It was a horrible feeling because I knew that I couldn’t go down there by myself. I can’t be alone, I need someone to help me,” Herasymova says. “I realized that the only way for me to be safe during the war was evacuation.”
[time-brightcove not-tgx=”true”]

Like many disabled Ukrainians, Herasymova felt excluded from safety and relief efforts designed for the able-bodied population. The NGOs European Disability Forum and Inclusion Europe estimate that there are at least 2.7 million people with disabilities in Ukraine, though other estimates suggest that may be an undercount. Many disabled Ukrainians are more vulnerable to Russian attack, while also at greater risk of abandonment, violence, and discrimination within their own communities.

Herasymova and her mother bought train tickets to Lviv, near the Western border of Ukraine, the very next day. The train was packed with people, many standing and without tickets. “For half of our journey it was pitch black without any lights,” Herasymova says, to avoid the train being spotted by Russian jets. “It was really dangerous. There were a lot of people, a lot of children who cried and cried all the way.”

After many more hours traveling from Lviv to the border by minibus, they finally crossed into Poland. Speaking to TIME from Denmark, where she is now staying, Herasymova says she wouldn’t have made it to safety without her friend and fellow disabled-rights activist Yuliia Sachuk, who found her accessible accommodation in the country and organized her onward journey.

Sachuk had been preparing for the possibility of a Russian invasion since the annexation of Crimea in 2014. As chair of Fight For Right, a Ukrainian non-profit supporting people with disabilities, she understood the importance of coordinating inclusive response strategies to conflict.

“I had a feeling that in a situation of war, we [the disabled community] would be the first victims,” Sachuk says. “Maybe not directly, but we would become victims because of our disability. We understood clearly that nobody would come and help us in our efforts to survive.”

Sachuk says that for months before the war, Fight For Right tried to coordinate with authorities to develop plans to help disabled people evacuate. The organization’s volunteers were ready—they had received donations through GoFundMe, but they needed help in scaling up. But no help came, Sachuk says. “In Ukraine we still don’t have a systemic approach to help different priorities groups, elderly people, people with disabilities, children.” 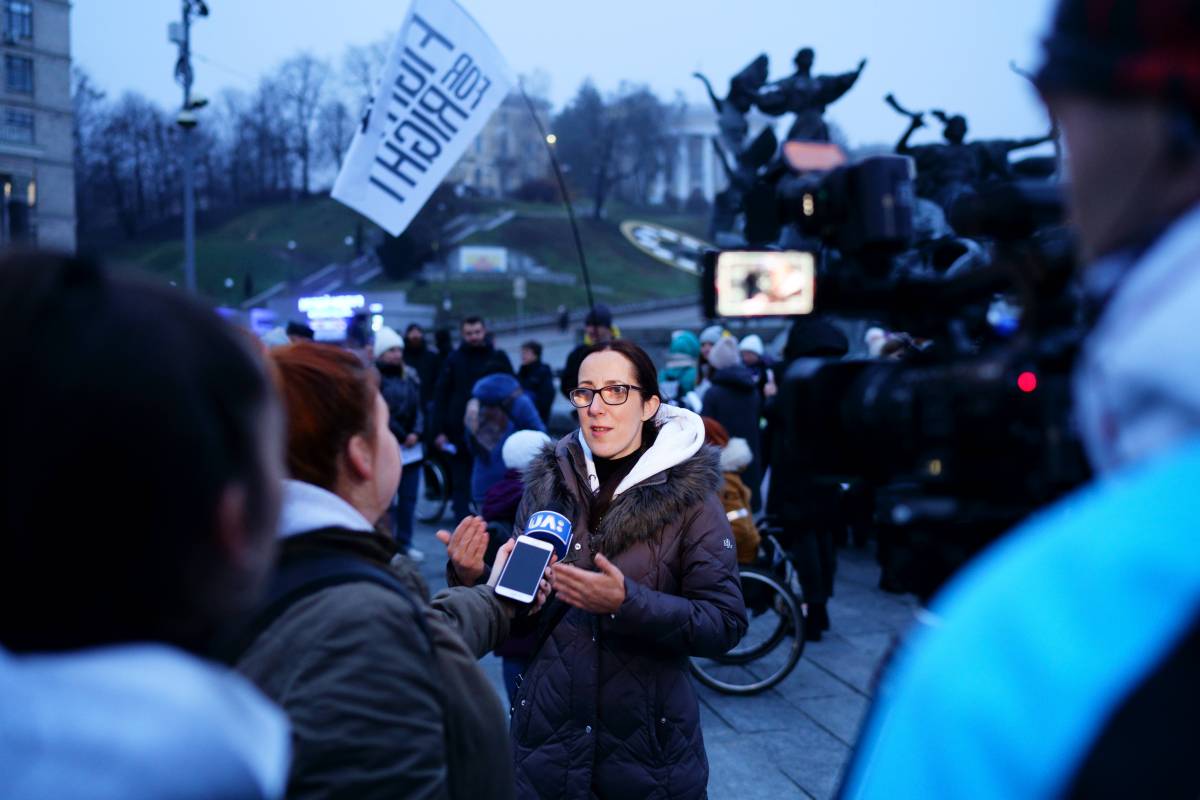 Feeling abandoned by both the state and humanitarian aid groups, disabled Ukrainians have urgently mobilized to help their own communities. Drawing on the strength of pre-existing grassroots networks in the country, activists have coordinated with disabled communities abroad at astonishing speed. Already, Fight For Right’s team of 40 volunteers—many of whom are disabled themselves—have helped 400 people flee the country.

The need for solidarity in disabled communities has become ever more clear as the invasion has progressed, stripping away formal support structures and igniting latent prejudices. In a 2020 report on disability rights in Ukraine, the pan-European human rights NGO Council of Europe found that disabled people are often excluded from Ukrainian society because of negative stereotypes, legal and workplace discrimination, and high levels of institutionalization. The war has exacerbated these issues, resulting in what Yannis Vardakastanis, chair of the International Disability Alliance, called “a humanitarian crisis within a crisis.”

In some cases, a lack of education and understanding of disabilities has made it difficult for disabled Ukrainians to seek help or safely evacuate. Oleksandr Nikulin and his partner are HIV-positive—they are excluded from government measures which ban men of conscription age from leaving Ukraine. Yet, after a 16 hour trip to the border between Ukraine and Slovakia, they found themselves having to explain their disability to the military.

“On our first attempt at the border, a guard got onto our bus and said, ‘You are a man, what are you doing here?’” Nikulin says. They explained they had certificates proving their health exemption from the army. “But the guard said, ‘It doesn’t matter, you are a man, go back.’”

After several more failed attempts, Nikulin and his partner met a volunteer who took them to the border police and argued successfully for their safe passage. Still, the experience left Nikulin shaken. “It was so awful because I didn’t understand why,” he tells TIME from Frankfurt, Germany, where he is staying with a friend. “I’m not a criminal, I’ve got documents. I don’t know about war or how to kill people. I can be more useful helping other people with disabilities to evacuate from Ukraine.”

Ukrainians with invisible disabilities, like Nikulin, often face even greater levels of misunderstanding and discrimination. 61-year-old Raisa Kravchenko was forced to leave Kyiv with her 28-year-old son, who has an intellectual disability, after the start of the Russian attack. They moved to Kravchenko’s home town 60 miles west and have tried to establish a routine to make her son feel comfortable. They go on walks together every evening, but she can’t control how other people react to him.

“There are military checkpoints at the entrance and the exit of the town,” Kravchenko says. “He entered a checkpoint and he was told to stop by the army but he didn’t. And so they shot. Thank God, they were shooting into the air, but they called the police who brought him home.”

This has happened three times, she says. “The police say why don’t you control him? And I tell the police: try and tell the wind where to blow.” Now, her son is often afraid when they go out in the town.

Kravchenko, who has a physical disability herself, had to make the same devastating decision many disabled people and their families were forced to make. She knows her son wouldn’t cope in a refugee camp or in an unfamiliar environment, and she worries she would fall ill if subjected to a long journey out of the country. So, she and her son will stay in Ukraine.

They also struggle to get to bomb shelters when the alarm sounds—so they’ve decided to stay put. “By ignoring all these alarms I have a better chance of survival but if I react and go to the cellar, I could definitely have either a stroke or something,” says Kravchenko, noting the sound of a bomber plane passing overhead.

“I’m a kind of fatalist,” Kravchenko says. “Why should I spoil the rest of my life? I don’t know how long I’m going to live. Why should we rush and be in crowded places and suffer?”

Kravchenko has spent decades improving the lives of disabled Ukrainians and their families. Dissatisfied with the state’s preference for caring for people with intellectual disabilities in institutions, Kravchenko founded the VGO Coalition, an alliance of 118 local NGOs with the aim of improving policies and support for the intellectually disabled. As leader the local NGO in her area, she successfully lobbied the local authorities in Kyiv to establish a day center for adults with intellectual disabilities. It provided a hub for their guardians—mostly mothers—to meet and share support.

Having that network was “life changing,” Kravchenko says. “We brought up a new generation, a different generation of people with intellectual disabilities with an absolutely different quality of life. They were able to be in the city, to communicate, to do meaningful activities. They had friends, sometimes they fell in love and some of them married.”

The center was forced to close when war broke out. Now, cut off from the group, Kravchenko has had to find different ways to communicate with other mothers. Some of them have a Viber group chat, where they urgently exchange messages and updates from around Ukraine. One day, Kravchenko received news that a woman and her son who had cerebral palsy were caught in an explosion. The son was badly wounded. His mother had to watch him die for two days, unable to reach help.

The situation is clearly taking its toll on Kravchenko, but she hasn’t stopped trying to help in whatever way she can. The VGO Coalition has so far received €20,000 ($22,000) in donations from Inclusion Europe, an international NGO supporting people with intellectual disabilities. Many of the mothers live in rural areas, and don’t have cell phones or bank cards. Yet, word has still spread through the network, and the coalition has distributed the cash through relatives and neighbors.

The VGO Coalition, like Fight For Right, is driven by the same community of people who it is trying to support. Katarzyna Bierzanowska, a Polish activist who is helping Fight For Right secure accessible accommodation for disabled refugees in Poland, worries that the burden to help others falls disproportionately on disabled volunteers. “We do not need exhausted heroes,” she says. “We need ready volunteers.”

Despite having medical and psychological needs themselves, many disabled volunteers feel they can do the work better than anyone else. “We know how to talk to people, how to make them more confident because we have the same experience,” Sachuk says. Herasymova agrees that the ability to relate to others is vital. “When I say I use a wheelchair and I was evacuated, they think ‘okay if you can, maybe I can do this too.’”

While their colleagues and other disabled people remain in Ukraine, the disabled evacuees will continue to help from afar. They still struggle to process the reality of the situation.

“We continue to live there. Physically we’re here, but our thoughts and minds are in Ukraine,” Sachuk says. Although she managed to escape with her son, her husband and parents are still living in a war zone.

“Of course, I feel safe,” Nikulin says from Frankfurt. “But happy? I don’t know. Because many people with disabilities are still in Ukraine. I can’t believe that war is in my country in the 21st century. I still can’t imagine it.”

With no idea of if or when they will ever be able to return, Sachuk and Herasymova are finding comfort within their disability network abroad, which is stronger now than it ever has been before. “I have worked in this area for many years,” Sachuk says, “but I have never seen such unity and solidarity among the disabled community.”