During a lull between air raid warnings earlier this month, Iryna Nikolaieva sat in a stairwell of a Kyiv bomb shelter where she had been living for three days and called engineers at two chemical plants near the front lines in the country’s east. Nikolaiva worked as an expert on hazardous waste, and she worried that fighting near the facilities could damage earthen dams holding back hundreds of thousands of tons of chemical sludge, setting off a catastrophic accident.

A manager at one site picked up and said that the situation was under control. The chief engineer of the other—a chemical processing facility with waste facilities less than two miles from the front line near the town of Toresk—said he had no idea how the storage sites were holding up. “They said they could not get there because of active hostilities,” says Nikolaieva, speaking from Warsaw, where she fled after nine days living in the bomb shelter with her son, his girlfriend, and hundreds of other Kyiv residents. “It’s not safe for people to go there to check.”
[time-brightcove not-tgx=”true”]

Vladimir Putin’s unprovoked attack on Ukraine has already caused unimaginable suffering, with millions of civilians forced to flee their homes, and thousands of others trapped under Russian shelling in cities like Mariupol. The fighting is also creating new environmental hazards, which threaten to add to the war’s human cost. Some of those environmental risks, like a release of radiation from one of Ukraine’s nuclear power plants, could have immediate and devastating consequences. Others, like carcinogenic dust from bombed buildings, are long term threats, with effects likely to reverberate for years and decades after fighting stops.

Read more: Ukraine Must Be the Last War of the Age of Impunity

All wars create devastating environmental threats for civilians, but the fighting in Ukraine could lead to particularly disastrous environmental consequences because the country is so heavily industrialized, particularly in the east, considered to be Ukraine’s industrial heartland. Much of that infrastructure—steel plants in the eastern Donets Basin, chemical facilities near cities like Kyiv and Korosten, and weapons factories, including facilities to produce intercontinental ballistic missiles—was developed in the Soviet era, with some having fallen into disrepair or mismanagement in recent years. Warfare also changes the risks posed by such facilities immensely. Some hazards might be relatively well-contained under normal circumstances, but could kill or sicken thousands if they are damaged by bombs or shelling. Hydropower dams could fail, for instance, and flood entire towns and villages. One of the most dangerous threats is the possibility of a toxic waste spill from one of Ukraine’s chemical facilities, such as the plant near Toresk. 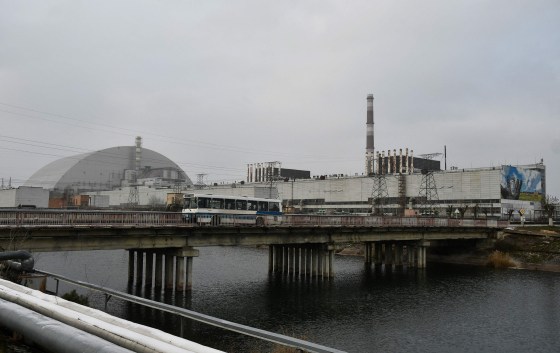 AFP via Getty Images—AFP or licensors(FILES) This file photograph taken on December 8, 2020 shows a general view of Chernobyl nuclear power plant and giant protective dome built over the sarcophagus of the destroyed fourth reactor.

That facility in particular could be extremely susceptible to damage, and an accident could have catastrophic consequences. The Toresk facility has two huge man-made toxic waste ponds, each emitting sickly-sweet phenol fumes, along with gaseous naphthalene and formaldehyde (even standing nearby is enough to cause nausea and dizziness, and to irritate visitors’ throats and eyes). Nikolaieva conducted a government-sponsored audit at the facility in 2019, and found that one of the dams holding back more than a quarter million tons of chemical sludge had “obvious” signs of instability.

She concluded that fighting with Russia-backed rebels risked setting off a chain reaction disaster—shelling could breach one of the storage ponds and send thousands of tons of waste racing downhill, flooding an even larger 8 million ton, man-made lake filled with chemical byproducts below. Within 10 minutes, such a surge could breach levees around that site and send millions of tons of toxic sludge pouring into the Zalizna river, with a tidal wave of chemical ooze knocking out bridges and electrical equipment downstream, and contaminating drinking water for the entire region. “People will die if it’s the only water that they can drink,” Nikolaieva says. “Maybe for one week [they will be] okay, and then your organs will be poisoned; the liver first.”

Notably, much of that poison would flow downstream to the Seversky Donets river and into Russia. “I would like to inform Russians and say we will have our chemicals in the water taps,” Nikolaieva says.

The war in Ukraine will likely also have less obvious effects on local environments and the health of people living in them. Even if fighting steers clear of industrial facilities, it can still create new hazards, like spilled fuel that can contaminate groundwater, or chemicals and heavy metals left behind from spent arms. Many of the effects of environmental damage may only become apparent in the years after fighting ends—like carcinogenic dust and debris that could cause cancers (like those affecting 9/11 first responders) in survivors of shelling attacks. And if a major disaster does occur, the war will only make it worse by preventing containment efforts or adequate warnings to affected populations.

Nuclear facilities are a prime example, particularly after Russian forces attacked the irradiated Chernobyl exclusion zone early in the fighting, and fought over the Zaporizhzhia nuclear power plant in the county’s southeast earlier this month, sparking a fire at the facility. A major accident at either site could have enormous repercussions for Ukraine, the broader region, or even the entire hemisphere, say Olena Pareniuk and Kateryna Shavanova, two Ukrainian radiobiologists with extensive experience working at Chernobyl, who jointly corresponded with TIME (Shavanova is in Kyiv while Pareniuk is near Chernivtsi, Ukraine). If the massive arc-shaped steel shelter built to confine the remains of Chernobyl’s No. 4 reactor is damaged, it could spread radioactive dust across the region. And an accident at Zaporizhzhia, which houses an amount of nuclear material equivalent to 20 Chernobyls, could be even more disastrous than the 1986 Chernobyl meltdown, since the ongoing war could make it all but impossible to mount an effective cleanup response (it took about 500,000 “liquidators” recruited from around the USSR to contain the Chernobyl disaster).

“No one with common sense would enter the territory of a nuclear plant with artillery weapons,” Pareniuk and Shavanova write over email. “For us…such behavior does not even fit into our understanding of the world. It’s as if the river flowed up in the sky by itself or the sky turned orange.” 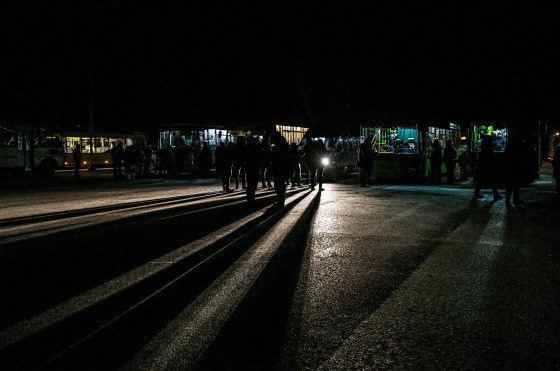 Ukraine’s environmental protection ministry has made attempts to catalog the environmental damage caused by Russian attacks. And some NGOs have worked remotely to try and map potential environmental hazards, both to warn civilians, and aid in cleanup efforts when the war finally ends.

For now, in the midst of the fighting, it’s hard to see the real extent of environmental contamination—though numerous reports of bombed industrial plants aren’t a good sign. “We don’t even know what number of square kilometers [of land] have been destroyed,” says Tetiana Omelianenko, a waste management consultant based in Kyiv. Ukrainian environmental experts have created online pages where local residents and companies can report environmental incidents during the conflict that might later require remediation, like spilled gasoline from destroyed fuel storage facilities, or the destruction of an industrial plant. “After the end of the war, it will be evaluated and published,” Omelianenko says. “Only after that can we do some estimations [of environmental damage].”

But until fighting stops, Ukraine’s environmental experts can only do so much. Since getting to Poland, Nikolaieva has worked for the Ukrainian government without pay, preparing information on Ukraine’s toxic waste sites to present to intergovernmental groups. Omelianenko, who has remained in Kyiv despite ongoing attacks, has divided her time between volunteering and continuing her environmental consulting work (“More or less, I have a strong nervous system,” she says). She is surveying Ukrainian waste management companies to try and predict what will happen if the fighting shuts down their operations, and she’s planning to help revise a green action plan for the city of Kyiv after the fighting ends, changing cost estimates to account for damage from Russian artillery, with the idea of keeping the city on track for its climate goals. She’s also sprouting plant seeds in her apartment—another effort to prepare for a future without bombs and shelling.

“When the war ends,” Omelianenko says, “I’ll need to grow flowers in my garden.”