Reverse pyramid training (RPT) is a style of training that involves using heavier weights and lower reps for your first set of an exercise and lighter weights and higher reps in later sets.

RPT is often touted as an effective way to help beginners boost their strength, intermediates blast through lifting plateaus, and advanced weightlifters ring out the last of their genetic potential for muscle and strength gain.

Is it as effective as many gurus claim, though, or is it just another viable training method among many?

What Is Reverse Pyramid Training?

Reverse pyramid training (RPT) is a style of training in which you do the first set of an exercise with heavy weights in a low rep range (also known as your “top” set), then do each subsequent set with progressively lighter weights and higher reps.

You’ll also see many RPT training programs give specific rep targets for each set instead of rep ranges as I’ve shown here, but I prefer the latter methods for reasons you’ll see in a moment.

Most RPT training programs include three workouts per week, and in an RPT workout, you typically . . . 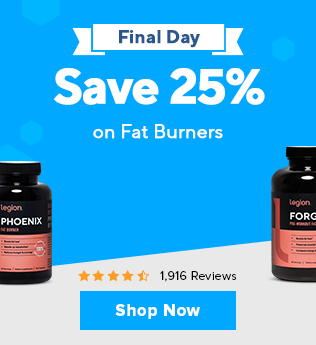 Traditional pyramid training is the exact opposite of RPT: you do the first set of an exercise using light weights in a high rep range and progress to heavier weights and lower rep ranges with every subsequent set.

The downside of traditional pyramid training is that you perform your heaviest, most fatiguing, and arguably most important set when your muscles are already somewhat tired. This impairs your performance on the sets that are likely to have the biggest impact on your progress.

Straight sets involve lifting the same amount of weight and aiming for the same number of reps in all of your sets for each exercise.

Provided you use a strategy such as double progression to get progressively stronger over time, straight sets are a simple and effective way to build muscle and strength, especially if you’re relatively new to weightlifting (that’s why it’s the method I advocate in my fitness books for men and women, Bigger Leaner Stronger and Thinner Leaner Stronger).

As such, most well-designed RPT routines use straight sets for the one-to-two exercises that come after the reverse pyramid sets in each RPT workout.

That’s a lot of training terminology to take in, so here is a diagram that illustrates how each of these training methods differs:

The Benefits of Reverse Pyramid Training 1. It prioritizes your heavy sets.

Research shows that lifting heavy weights is the best way to get strong and is likely a little better for muscle growth than lifting lighter weights.

That’s why you should always prioritize heavy weightlifting over faffing around with lighter weights.

RPT has you doing your heaviest sets when you’re feeling freshest, which helps boost your performance.

What’s more, you know going into an RPT workout that you only ever have two heavy sets to do: the first set of your first and second exercise.

This gives many people a psychological boost because they know they only have to stomach a couple of truly intense sets before the weights decrease, the rep ranges increase, and the rest of the workout becomes duck soup.

2. It stimulates all three muscle-building “pathways.”

There are three primary factors involved in stimulating muscle growth:

Of the three, progressive tension overload is the most important, and refers to progressively increasing tension levels in the muscle fibers by lifting progressively heavier weights over time.

Muscle damage refers to damage caused to the muscle fibers by high levels of tension. This damage necessitates repair, and if the body is provided with proper nutrition and rest, it will grow the fibers to better deal with future stimuli.

Cellular fatigue refers to pushing muscle fibers to their metabolic limits by performing an action repeatedly.

You can think of these three factors as separate growth “pathways.” That is, you can target each in training to cause varying degrees of hypertrophy.

RPT has you hitting all three pathways of hypertrophy: By emphasizing heavy lifting, you’re emphasizing progressive tension and muscle damage, and by including higher-rep training you’re adding metabolic stress and fatigue. In theory, this results in maximum stimulation for both strength and hypertrophy.

Most RPT programs include three full-body workouts per week, and each workout contains just three-to-four exercises. This means you’ll likely spend less than three hours in the gym each week, which is far less than many other popular bodybuilding routines.

The downside of this, however, is RPT probably doesn’t include enough volume (sets and reps) each week for intermediate or advanced weightlifters to progress optimally. For them, it pays to follow a routine that includes more workouts, exercises, and sets each week, which inevitably means you have to spend more time in the gym.

Most RPT training programs encourage you to train to or very close to muscle failure (the point at which you can’t complete a rep despite giving maximum effort) on your first set of each exercise. This isn’t a requirement of RPT, per se, but it’s the most foolproof way to progress on most of these programs.

This, RPT aficionados say, is where the muscle- and strength-building magic of RPT happens.

The science, however, doesn’t agree.

Several studies show that training to failure isn’t necessary and may even be counterproductive. That is, it doesn’t help you build more muscle or gain more strength than training just shy of failure, but it’ll likely leave you feeling beaten up, overtrained, and peeved by your program.

You can easily negate this problem by following a well-designed RPT training program that includes rep ranges that have you training one-to-three reps short of failure, which research shows is the “sweet spot” for consistent muscle growth without wearing yourself out.

When you’re new to weightlifting, your body is primed to build muscle. So much so that you can maximize muscle growth with rudimentary programming.

At this stage, using more advanced strategies such as RPT makes your training unnecessarily complex and is more distracting than helpful.

As you just saw, RPT programs also usually involve taking one or more sets to muscular failure, which is detrimental to beginners because being overly fatigued makes learning new skills, such as how to bench press with proper form, more difficult.

Given that most beginners will be frazzled after their first set of an RPT workout, their form on each subsequent set may skid, which increases the chances that they’ll ingrain bad technique and may increase their risk of injury.

3. It’s probably not any better than training with straight sets.

The theory behind RPT looks cogent on paper, but there’s currently no scientific research to prove it’s superior to traditional workout programming in practice.

That doesn’t mean it isn’t, of course, but if research on traditional pyramid training is anything to go by, there’s reason to be skeptical of the supremacy of RPT.

For example, studies routinely show that traditional pyramid training is no more effective for building muscle and gaining strength than straight set training.

While this doesn’t necessarily mean RPT is a busted flush, it does make you wonder if there’s really any benefit of varying your rep ranges for a particular exercise within a workout (I doubt there is).

Once you understand the physiology of muscle growth, too, then you quickly realize that rep ranges in general aren’t overly important, which casts doubt on the efficacy of RPT training (which is entirely based on varying the reps and weights used for a particular exercise in a workout).

The Best Reverse Pyramid Training Routine for Mass and Hypertrophy

The following is a full-body reverse pyramid training routine that includes three workouts per week. Each workout consists of two RPT exercises and two “accessory” exercises. 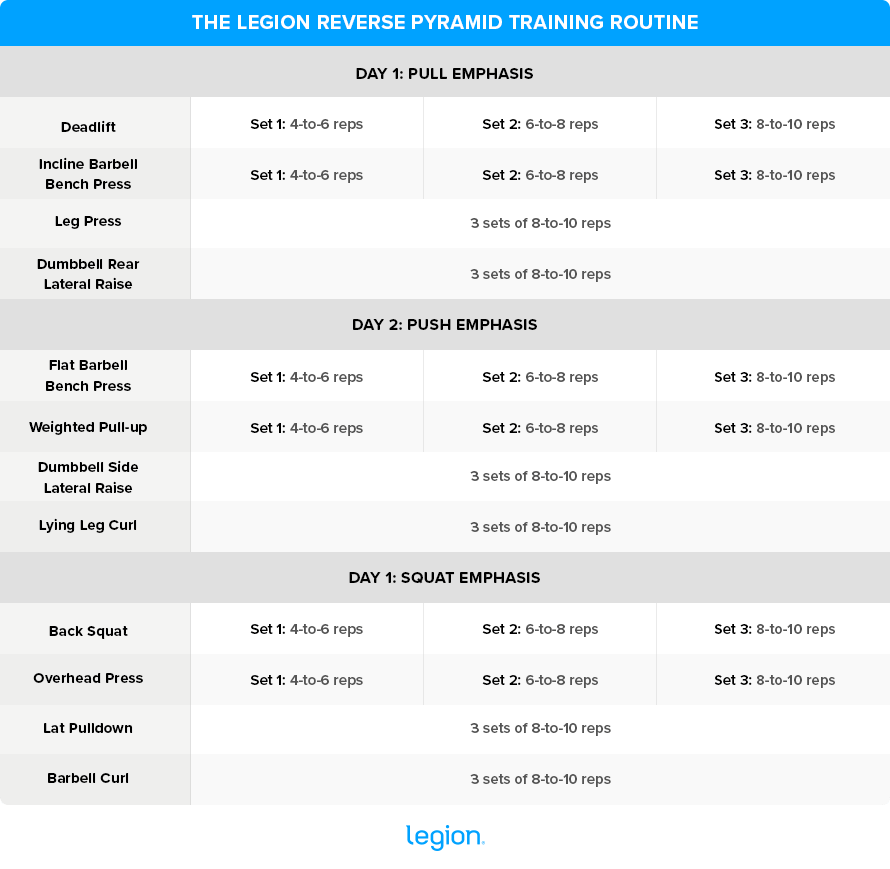 How to Progress in RPT Workouts 1. Warm up before each workout.

Doing a thorough warm up before your first exercise in each workout . . .

When you do an RPT workout, you don’t need to warm up before every exercise.

Instead, a thorough warm up before your first exercise in each workout should adequately prepare you for the rest of your workout.

(And don’t worry about having to do a warm up for a lower-body exercise at the end of a workout when you’ve otherwise only done upper-body exercises. By that point your body should be plenty warm from all the moving around you’ve done in the gym that day, so there’s no need to do more warm-up sets.)

When you do warm up for an RPT workout, here’s the protocol you want to follow:

And that’s it—you’re ready to start your RPT workout.

2. Once you hit the top of your rep range, move up in weight.

There are two types of progression in RPT training: one for your reverse pyramid sets and one for your accessory exercises (the exercises that come after the first two exercises in each RPT workout).

In both cases, the goal is to increase the weight you lift once you hit the top of your rep range.

The difference is that in your reverse pyramid sets, you progress each set independently, whereas for accessory exercises, you progress when you hit the top of your rep range for one set.

To make sense of this, let’s look at some examples starting with reverse pyramid progression.

Let’s say week one of your RPT program calls for the following on the bench press:

During your workout, you manage this:

Here’s how your weight and rep targets would look in week two:

Now let’s imagine you did week two’s workout and you managed the following:

And here’s what your weight and rep targets would look like in week three:

You’ll continue progressing each set like this, increasing the weight and then reps independently in each set.

Progressing your accessory exercises works the same way as your first two exercises, except you use one rep range instead of three.

For instance, let’s say your workout calls for 8-to-10 reps of the lat pulldown. If you get 10 reps on one set, add 10 pounds for your next set and work with that weight until you can (eventually) lift it for 10 reps, and so forth.

If you get 8 or fewer reps with your new (higher) weight on your next sets, reduce the weight by 5 pounds to ensure you can stay within your target rep range (8-to-10) for all sets.

In order to maximize muscle and strength gains, you need to take most of your sets close (but not all the way) to muscle failure.

To ensure you’re taking your sets close enough to failure, ask yourself this question at the end of each set, just before re-racking the weight: “If I absolutely had to, how many more reps could I get with good form?”

If the answer is more than two, then you should increase the weight or reps in line with the progression..