The Benefits of Wearable Weights—and When to Use Them 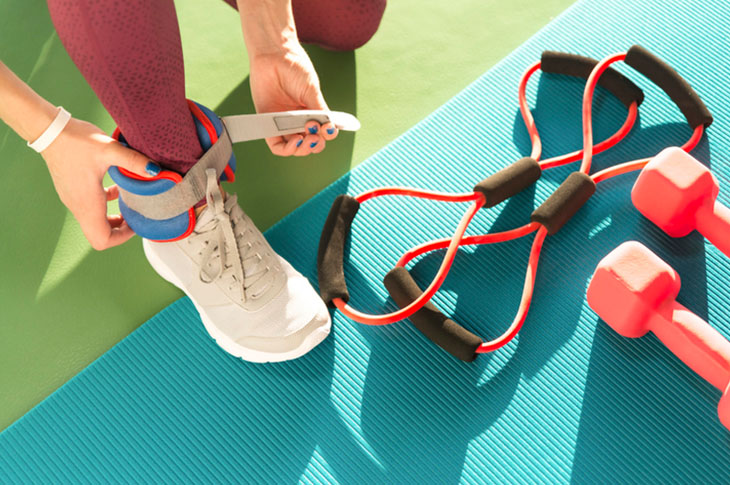 In today’s world, individuals find themselves more stressed than ever with increased work, less free time, and never ending to-do lists. While there are many ways to manage overall stress levels, research shows that physical activity continues to be a top choice to help lower stress levels, increase energy, and improve mood.

While many want to start incorporating more resistance training into their routine, they may feel hesitant to join a gym with a monthly membership fee, or start spending money on expensive gym equipment for the home. One solution? Wearable weights!

Adding resistance training exercise into the mix has a plethora of benefits including (but not limited to): increasing muscle mass, decreasing body fat percentage, improving overall strength, mobility, and balance, as well as an increase in self-esteem.

Wearable weights, also known as ankle weights, give you the ability to add resistance to body weight exercises without burning a hole in your wallet! Ankle weights range in price from $20 to $60 depending on where they are purchased, and how heavy they are.

Why would someone want to add ankle weights? Great question! Ankle weights are one of the most convenient ways to make the simplest exercise more challenging. For example, take basic walking, by strapping on a set of ankle weights it automatically adds an extra two, four, eight, or even ten pounds to that movement, increasing your strength and your stamina with the same movement.

Some other examples include:

Seated Leg Extension. Place ankle weights snug around ankles, and take a seat with knees at 90 degrees. From this position, straighten the right leg out in front, and lift up until the right leg is parallel to the floor. Return the right leg to the start position, and repeat for the left leg.

Overhead Press. Place ankle weights snug around wrists, bend the elbows, turn the palms away from body, and bring hands up towards shoulder height. Slowly raise both arms up above head until arms are fully extended. Return to start position, and repeat.

Climbing Stairs. Place ankle weights snug around both ankles, and climb stairs either one step at a time, or skipping one step. Repeat as many times as desired.

Walking from room to room at home, climbing stairs in the office, or doing a Fitbit virtual workout during lunch hour—adding wearable weights can bring that extra bit of challenge!

The post The Benefits of Wearable Weights—and When to Use Them appeared first on Fitbit Blog.