The 12 Best Deadlift Variations for Building Muscle and Gaining Strength

You’ve probably heard that the deadlift is one of the best muscle- and strength-building exercises you can do.

You may have also heard that of all the deadlift variations there are, the “conventional deadlift” is the best of the bunch, and that you have to deadlift conventionally to get the full benefits of the exercise.

While the conventional deadlift is a fantastic exercise and allows you to lift more weight than most other deadlift exercises, it’s not necessarily ideal for everyone.

Some people find it uncomfortable, some find that it beats up their joints more than other variations, and others simply don’t like it due to personal preference.

And as you’ll learn in this article, there’s nothing truly special about the conventional deadlift. Yes, it’s a great exercise and worth doing if you like it, but you can gain muscle and strength just as effectively with other deadlift variations.

In this article, you’ll learn 12 of the best deadlift variations, so no matter what your goals or circumstances, you’ll be able to find a deadlift that works for you. 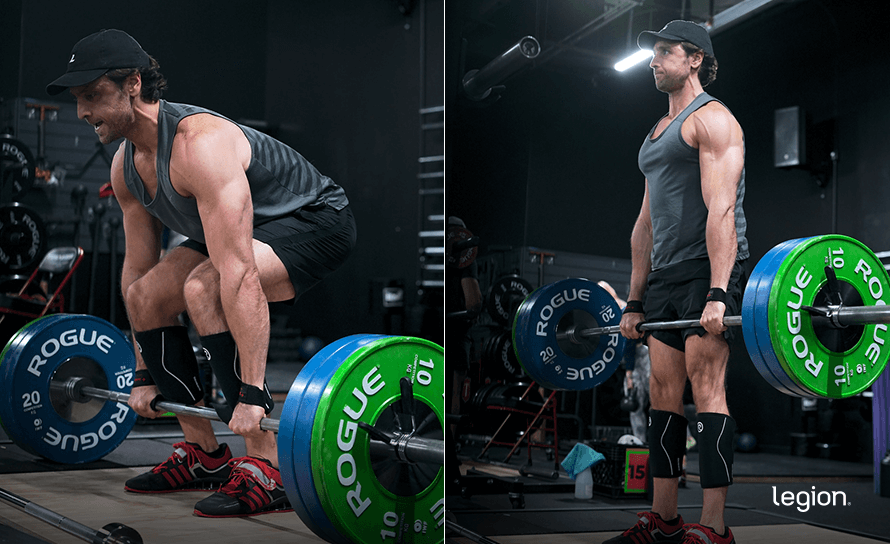 Many people think of the conventional deadlift as the “king of back exercises,” but research shows that it trains almost every muscle in your posterior chain (the muscles on the back of your body), including your lats, traps, lower back, glutes, hamstrings, and calves.

What’s more, it also trains muscles on the front of your body such as your quads, forearms, core, and shoulders to a significant degree, too.

The conventional deadlift also boosts full-body strength and power, improves athletics performance, and may help relieve lower-back pain. (This is also why the deadlift is featured in both of my bestselling workout programs for men and women).

Check out this article if you’d like to learn how to conventional deadlift with proper form:

How to Deadlift with Proper Technique 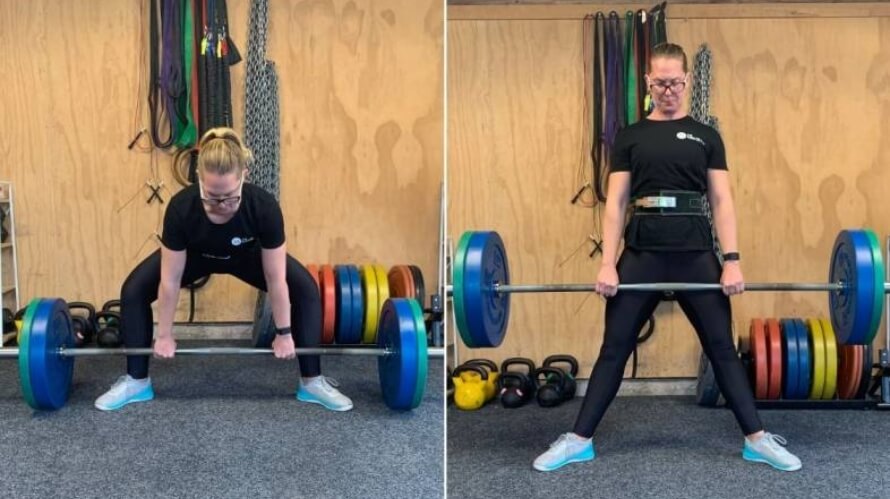 The sumo deadlift has you take a wider than shoulder-width stance and point your toes slightly outward, which places your hips closer to the bar and your back in a more upright position than they are in the conventional deadlift.

Thus, the sumo deadlift variation is a good type of deadlift for anyone who wants to focus on developing their legs, or who wants to take some of the stress off of their lower back. Since you don’t have to bend your knees as much, it can also work well for people suffering from knee pain.

Check out this article if you’d like to learn how to sumo deadlift with proper form:

The Definitive Guide to the Sumo Deadlift 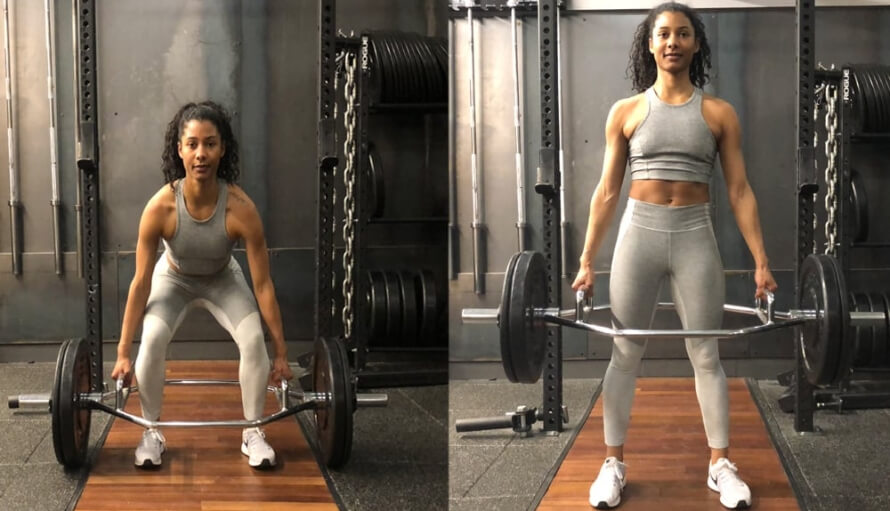 Check out this article if you’d like to learn how to trap-bar deadlift with proper form:

How to Trap-Bar Deadlift with Proper Form (with a Free 12-Week Training Plan!) 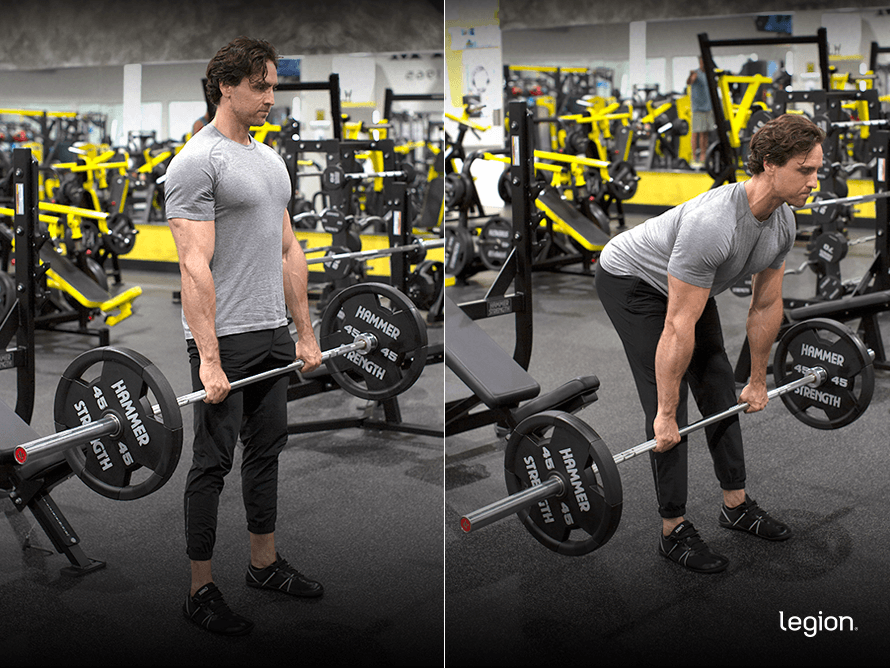 The Romanian deadlift (RDL) trains the posterior chain in a very similar way to the conventional deadlift. However, because of the difference in form, it emphasizes your hamstrings rather than your back and doesn’t train your quads much at all.

Of all the different types of deadlifts, the Romanian deadlift variation is one of the least fatiguing, which means you can do it more often without wearing yourself to a frazzle. This is why it’s often best to program the Romanian deadlift after another fatiguing lower-body exercise, like the squat, on a day you aren’t doing another deadlift variation (this allows you to train all of your “deadlift muscles” at least twice per week).

Check out this article if you’d like to learn how to Romanian deadlift with proper form:

The Definitive Guide to the Romanian Deadlift (and the Best Variations!) 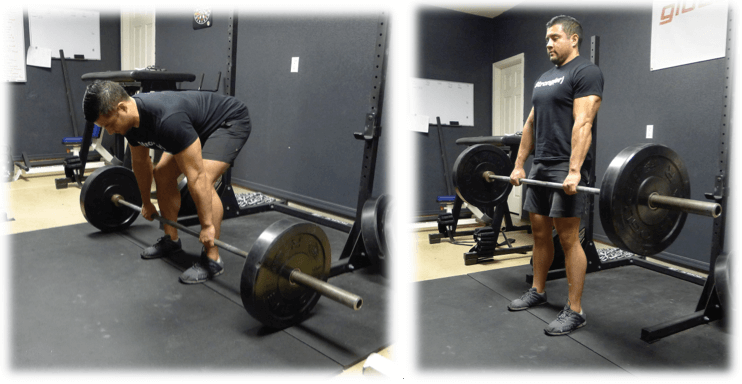 The stiff-leg deadlift is almost identical to the Romanian deadlift except the bar starts and finishes each rep on the floor.

Research shows that the stiff-leg deadlift is a good deadlift variation for glute, hamstrings, and lower-back development because it has a long range of motion and trains the muscles on the back of your legs in a stretched position, which is generally better for muscle growth. 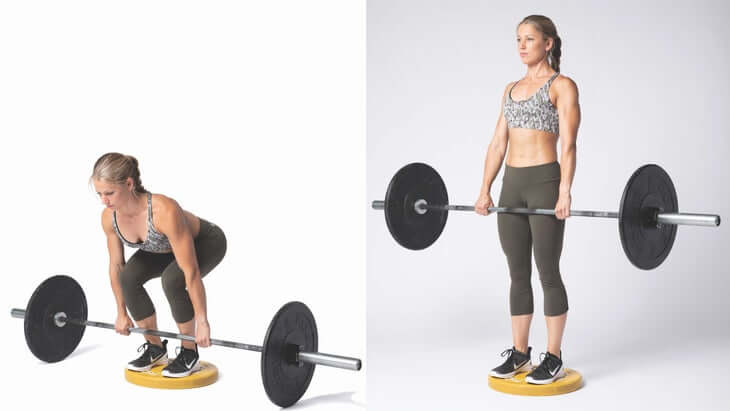 The deficit deadlift involves doing the conventional deadlift with your feet elevated two-to-four inches off the floor on a weight plate or step.

In the conventional deadlift, most people are weakest as they pull the barbell off the floor when their knees and hips are most bent. By performing the deadlift with your feet raised on a weight plate or step—at a “deficit”—you train your muscles during the part of the exercise where they’re weakest. Research shows this may increase the amount of force you can produce in the initial pull when you get rid of the deficit and go back to the conventional deadlift.

In other words, the deficit deadlift is a “tool” to improve your performance on the conventional deadlift, but it isn’t necessary for everyone, especially if improving your deadlift performance isn’t one of your top priorities.

The deficit deadlift also involves a greater range of motion than the conventional deadlift, which could hypothetically improve muscle growth, but it also forces you to use less weight, which would largely negate any of its (theoretical) muscle-building benefits.

The rack pull works the same way as the conventional deadlift, except you begin with the bar resting on the safety arms of a squat rack at about knee height.

Because the bar starts from an elevated position, rack pulls have a much shorter range of motion than the conventional deadlift, which means you can rack pull more weight than you can deadlift. The downside is that this isn’t optimal for muscle growth and the rack pull doesn’t train your legs very effectively.

Thus, you can use rack pulls in a couple of ways:

Check out this article if you’d like to learn how to rack pull with proper form: 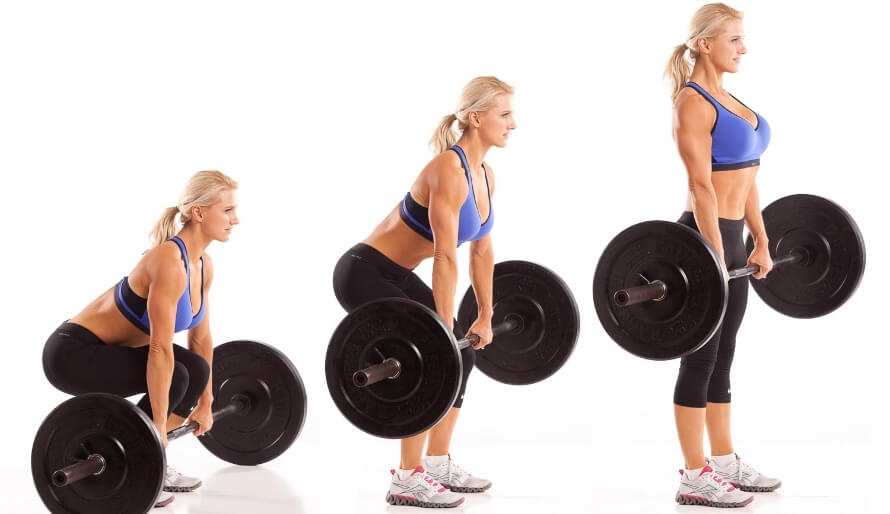 A pause deadlift involves performing the conventional, sumo, or trap-bar deadlift, but pausing for one-to-two seconds when the bar is somewhere between mid-shin and knee height.

This is useful because many people fail the deadlift in the “second phase” of the exercise, as the bar travels between your mid-shin and knee.

Pausing as you lift the weight trains your muscles to become stronger in this position, which makes it less likely that you’ll fail in the mid-portion of the exercise, and should increase your performance when you go back to regular deadlifting. 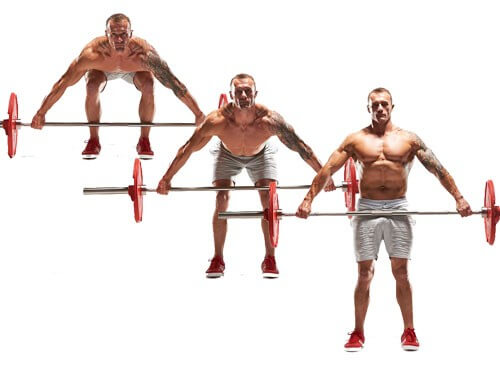 The snatch-grip deadlift is a variation of the conventional deadlift that’s performed with a “snatch grip”—a method of gripping a barbell that’s most commonly used in Olympic weightlifting.

(To find the perfect width of a snatch grip for you, stand upright and grip a barbell at a width that places it in your hip crease while your arms are straight.)

By gripping the bar with a snatch grip, you increase . . .

However, you can lift far less weight with the snatch-grip deadlift than you can with other deadlift exercises, and many people don’t have enough flexibility in their ankles, knees, and hips to get into the correct starting position.

That’s why I recommend using the snatch-grip deadlift as an “accessory exercise” to improve your back strength and deadlift performance, but not as the main deadlift variation in your program.

The single-leg Romanian dumbbell deadlift is the same as the Romanian deadlift, except you perform it using one leg at a time and with a pair of dumbbells instead of a barbell.

The main benefits of the single-leg dumbbell Romanian deadlift are that it has a longer range of motion than the regular Romanian deadlift, which is generally better for muscle growth, and it trains each side of your body independently, which means it’s useful for identifying and evening out any strength or muscle imbalances you might have.

The downside, though, is that you can’t use nearly as much weight as you can with the regular Romanian deadlift, and maintaining your balance becomes harder as you get stronger.

This is why I recommend you stick to the traditional Romanian deadlift, and only use single-leg deadlift variations when you don’t have access to a barbell or heavy dumbbells (when traveling, for example). 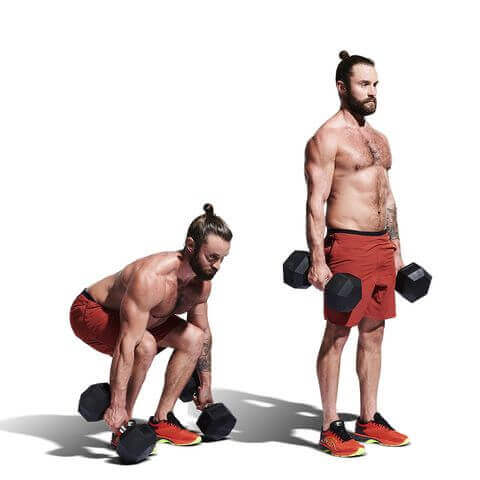 The dumbbell deadlift is performed the same way as the conventional barbell deadlift, except you use a pair of dumbbells instead of a barbell.

The biggest downside of deadlift variations with dumbbells is that they limit the amount of weight you can pull. What’s more, because dumbbells move independently, it can be difficult to lift them in a straight vertical line during each rep. For these reasons you should really only use dumbbell deadlift variations if you don’t have access to a barbell. 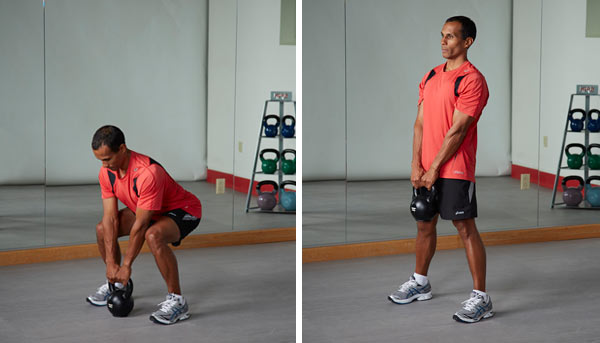 The kettlebell deadlift is the same as the conventional deadlift, only you use a kettlebell instead of a barbell.

The main benefit of the kettlebell deadlift is that it requires very little equipment and space, which means it’s a good option if you work out at home.

The biggest downside, however, is that even the most well-equipped gyms only have kettlebells up to around 70-to-80 pounds, which limits how far you can progress. That’s why you should only use the kettlebell deadlift when you don’t have access to a barbell or heavy dumbbells.