Should You Still Wear a Mask on Planes, Trains, and Buses? Here’s What the Science Says 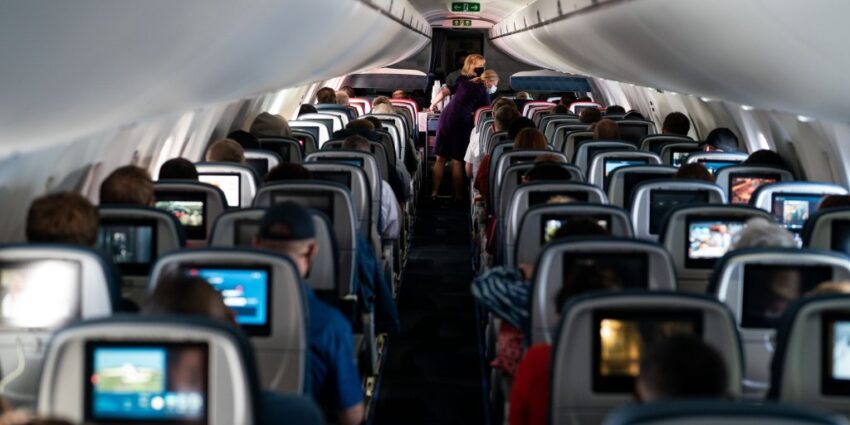 I was in a decided minority on the subway platform of the Second Avenue line in New York City the morning of April 19, wearing my mask as I have every day on the subway for the past two years. All around me were bared faces—where only the day before, compliance with the Metropolitan Transit Authority’s (MTA) masking rule had been near-total.

That says a lot about the confusion created by the 59-page decision handed down the day before by Florida U.S. District Judge Kathryn Kimball Mizelle, voiding the Transportation Security Administration’s (TSA) rule requiring masking on airplanes, airports, taxis, and other forms of public transit, including Amtrak. The decision does not forbid cities and states from maintaining their own masking rules, and the MTA is keeping theirs in place. But the great unmasking reached the New York City underground all the same.
[time-brightcove not-tgx=”true”]

In Washington, the Biden administration lamented the court ruling. “This is obviously a disappointing decision,” White House Press Secretary Jen Psaki told reporters on April 18. “The CDC [U.S. Centers for Control and Prevention] is recommending wearing a mask on public transit.”

But that recommendation will almost certainly not be universally followed. At least eight airlines—Delta, American, United, Southwest, Alaska, JetBlue, Frontier and Spirit—have announced that they are lifting their mask mandates. A handful of local transit authorities—including MARTA in Atlanta, SEPTA in Philadelphia, CapMetro in Austin, and New Jersey Transit are similarly allowing passengers to go maskless. Amtrak is also dropping its mask requirements. On the other hand, New York’s MTA; Portland, Oregon’s TriMet; Seattle’s King County Metro; and the Chicago Transit Authority are all keeping mask mandates in place.

All of this could lead to chaos as passengers board planes where masking is no longer required and land in cities where transit authority masking rules remain in place. More troubling, while air exchange systems on airplanes do a good job of filtering out pathogens like the SARS-CoV-2 virus, the same is not true of buses, subways, trains, and terminals, which have no such systems in place.

Read more: How Wearing a Mask Can Help Protect You Even If No One Else Wears One

“Millions who rely on buses and trains to get to work, and access essential services every day, will now be put at much greater risk,” tweeted Dr. Lucky Tran, director of science communication and media relations at Columbia University’s Irving Medical Center.

So what do you need to understand about mask-wearing in order to travel safely on all modes of transit in this new context? Here’s what we know so far.

What Type of Mask to Wear on Public Transport

Fit is vitally important—loose masks leave plenty of room for pathogens to travel—and N95s and KN95s, with their tighter fit, are clearly the mask of choice to maximize protection in all situations and on all forms of transportation. Dr. Wafaa El-Sadr, professor of epidemiology and medicine at Columbia University Mailman School of Public Health, acknowledges that comfort counts too and worries about people starting a flight (or other long trip on public transport) with a highly protective mask and then shucking it midway, since N95 masks are more restrictive than most cloth or surgical masks.

“It’s very hard for some people to wear an N95 mask, particularly on long flights,” she says. “So keep in mind your ability to maintain the mask wearing and then optimize the mask choice based on that.”

El-Sadr saw the recent change in masking rules play out in real-time. She was on a flight from San Francisco to New York when the pilot came on the intercom and announced that as of that moment masking was optional. The person sitting next to El-Sadr immediately removed his mask, as did most of the other people on the plane.

“While 100% of people were masked when we boarded the flight, I would say about 30% or so were masked when people were getting off,” she says. She remained masked and says that she considers the court ruling striking down the mandate “premature.” There are a lot of reasons for that.

First, advocates of unmasking do make a good case when they point to the air exchange systems on planes as a relatively effective way to clear the cabin environment of airborne viruses. As my colleague Jamie Ducharme has reported, “A 2020 study conducted for the U.S. Department of Defense—and carried out by researchers from Boeing and United Airlines, among others—found that aircraft ventilation and filtration systems reduced the risk of airborne SARS-CoV-2 exposure by more than 99%.”

But the systems only go so far. It is one of the most-unloved aspects of air travel that passengers—at least in coach, which is how most people fly—are packed shoulder to shoulder in narrow seats, without much space between rows. The pathogens the person next to you exhales have a lot less far to go to reach you than they do the vents and filters that theoretically clear them from the air.

“Even with very high levels of filtration, if you’re sitting next to someone who may have COVID but they perceive it as spring allergies and that individual is coughing or sneezing, that’s a very high risk position for you to be in,” says epidemiologist Keri Althoff of the Johns Hopkins Bloomberg School of Public Health.

The population mix on planes makes a difference too. People gather in airports from all over the world—many from places with high vaccination rates and low levels of transmission and many from places where the opposite, more infectious conditions prevail. That raises the health stakes for everyone onboard: “It is a time of high mixing from an epidemiological perspective,” Althoff says.

Then too, there is the consideration of who you’re meeting on the other end of your flight. The Easter and Passover travel season has just ended, Memorial Day weekend is coming up, and during such travel-heavy times, families and friends gather—including people who are older, have underlying conditions, or are otherwise particularly susceptible to COVID-19. If you fly unmasked, you may begin your journey uninfected and end it by carrying a virus that could make someone else very sick.

Read more: What to Do If You Test Positive for COVID-19 While Traveling

“It’s important to remember who you’re going to go see,” says Althoff. “If you’re planning on visiting someone who has a new baby or if you’re planning to go visit an older loved one you don’t want to inadvertently bring COVID to an individual who may be at higher risk.”

There are few scenes more harrowing for people who worry about COVID-19 than a crowd of people on a subway platform pushing into even more crowded trains, where bodies might be jammed together for the duration of the journey. While that all by itself is a reason to stay masked, subways may be a little safer than you think.

For one thing, Althoff points out, platforms typically aren’t as enclosed as they seem, with ventilation and other openings to the outside that do allow for some air exchange. The closer the temperature on the platform is to the temperature outside, the likelier it is that you’re getting at least some helpful ventilation. What’s more, the trains themselves may provide some relief as they enter and leave the station.

“Oftentimes there are wooshes of air,” Althoff says, which can help sweep away some of the stagnant atmosphere on the platform. Once you’re aboard, the fact that the trains make frequent stops with doors continually opening and closing and passengers continually climbing aboard and getting off also helps with air exchange.

Once again, the time of year makes a difference too. In big cities, tourists visit seasonally, and the more out-of-towners there are on the platform, the greater the likelihood of encountering people from areas with low vaccination rates. Masking can be especially important at times like these, as can social distancing—or at least as much distancing as a packed platform or train allows.

Boarding a bus is not like boarding a subway. You do your waiting outside instead of on an enclosed platform, which can make a big difference in minimizing the risk of viral transmission. However, once you climb aboard, you face the same problems of crowding as you do on subways, which means you should probably have a mask on while you ride the bus.

An advantage of buses is that the doors open as frequently as they do on subways, but they open to the outside, allowing for an exchange of fresher air than on a subway platform. Althoff recommends sitting near the door if you can—though there are only so many such seats on a bus and plenty of times it’s standing-room-only anyway.

Inter-city and local commuter trains are, on the whole, at least a little safer than buses and subways, if only because of their larger interiors, their wider seats, and the opportunity they afford for greater social distancing. What matters in these cases is often the length of your journey. The more time you spend on the train, the longer you’re exposed to other people in an enclosed space. What’s more, with each stop you encounter new passengers, raising the odds that someone who just climbed aboard is carrying the virus. That risk, Althoff warns, is especially high on Amtrak, which just dropped its mask requirement.

“On the east coast,” she says, “we have trains that go from D.C. to Boston every day. People jump on and jump off; people work in Philadelphia, but live in Baltimore or D.C.. So this is a situation where there’s a step up in the level of mixing of people from different communities with different background rates of transmission and vaccination.” No matter what Amtrak or your local transit system permits, staying masked on trains remains the best way to stay safe.

Read more: What to Know About Getting a Second COVID-19 Booster

Masking on Lyft, Uber, Taxis, and Other Ride Services

This is easily transportation’s most personal means of viral transmission (besides having your own car). It’s you and the driver in an enclosed space breathing common air for the duration of the ride. The longer that ride is, the greater the risk that a virus will have the time to be passed. Both Uber and Lyft have lifted their mask rules. Masks are no longer required in taxis under the federal ruling either, but states and localities are free to require them. Masking is still mandatory in New York’s iconic yellow cabs, for example.

Asking an unmasked driver to mask up is awkward, but at least an option. Remaining masked yourself is thus your best defense, as is rolling down the windows to facilitate air exchange. Rolling down windows on both sides of the back seat maximizes that effect by allowing for cross-ventilation.

Protecting the People Most Affected by the New Rules

It is a certainty that with the new rules in place, masking guidelines, which were never uniformly observed, will become even less so. But even if others are shedding their masks, you don’t have to.

“We have not eliminated, we have not eradicated this virus,” El-Sadr says. “When we have evidence of ongoing transmission, I think it behooves us in crowded settings, where you don’t know the vaccination status of the people around you, to wear a mask.”

This is especially true when it comes to protecting lower-income groups, who have been especially hard-hit by the pandemic, and who are more likely to use public transportation. “These are communities that have been disproportionately impacted by COVID,” says Althoff. “They have borne greater brunt of morbidity and mortality. So this is a place where I think it is really important to still continue to mask.”