If you are a fan of nootropics, or maybe, you are someone who is just a beginner and doing some internet surfing on the effective and well-researched nootropics available in the market at the moment, then I am sure you must have come across a therapy called Semax.

Not only do the users of Semax manifest cognitive advancement, but it also acts as an antioxidant in the body and improves microcirculation in the body.

I know it sounds very promising, and you want to know more, trust me, I got you!

This article will include everything you need to know about Semax, the potential derivatives of Semax available, and the benefits as well as side effects, if any.

Hopefully, you will be able to make a decision by the end of the article whether Semax or any of its derivatives are an ideal nootropic for you or not.

What is N-Acetyl-Semax Acetate?

Before knowing what N-Acetyl-Semax Acetate is, it is important to understand the background of the parent drug, which is Semax.

The Russian developed drug called Semax (1) is a peptide comprising 7 amino acids (Met-Glu-His-Phe-Pro-Gly-Pro). Semax is structurally analogous to the Adrenocorticotropic hormone (ACTH). What this means is that it is actually a small fragment of peptide extracted from the big chain of amino acids that make up ACTH.

The potential nootropic and neuroprotective properties of Semax have compelled researchers to carry out detailed studies on it, which led to the development of many sub-types of Semax, such as N-Acetyl-Semax Acetate, N-Acetyl Semax Amidate, and Adamax.

N-Acetyl-Semax Acetate is perhaps 3 amino acids short of the original Semax, which gives it a longer half-life as well as potency.

How Does N-Acetyl-Semax Acetate Work?

N-Acetyl-Semax Acetate follows multiple courses of action to affect the functioning of the body at various levels.

Because it is structurally analogous to ACTH, there is no surprise that it also mimics its action.

The primary areas where the drug expresses itself are the hippocampus, limbic reticular complex, and some of the other peripheral receptors.

The major way in which N-Acetyl-Semax Acetate works is by upregulating the release of brain-derived neurotrophic factor (BDNF) from the hippocampus (2).

N-Acetyl-Semax Acetate also increases the levels of tropomyosin receptor kinase B (TrkB). BDNF and TrkB work hand in hand to pose the effects.

Research suggests that N-Acetyl-Semax Acetate acts as a potent agonist of the melanocortin receptors found in the skin (3).

Being a strong nootropic, it is obvious that N-Acetyl-Semax Acetate increases dopamine and serotonin levels, the two big players in cognitive enhancement (4).

Evidence suggests N-Acetyl-Semax Acetate increases the enkephalins levels in the body. Enkephalins are small peptides responsible for minimizing the feeling of pain.

Research suggests a strong negative correlation between the BDNF levels and the frequency of mental disorders, such as depression, anxiety, PTSD, etc. As N-Acetyl-Semax Acetate increases BDNF levels, it potentially acts as an antidepressant and anxiolytic drug.

Increased levels of BDNF possess neuroprotective properties, which means that it enhances neuronal growth and amplifies synaptic/neuronal plasticity. This helps in forming strong neural connections in the brain, which aids in memory and learning (5).

Clinical trials show that you can recall better and focus as well as concentrate really well if optimal dosages are taken.

N-Acetyl-Semax Acetate alleviates stress levels and keeps you under the ice in tough moments. This overall improves the mental clarity as well as communication abilities in individuals.

Originally Semax was developed to manage cerebral ischemia, which is the insufficient supply of blood to certain microcirculatory areas of the brain (6).

Semax is known to improve microcirculation and minimize the risk of developing hypertrophy of the heart by significantly reducing blood pressure levels.

Because Semax decreases the breakdown of enkephalins, it helps in reducing the pain sensation.

The elevated dopamine and serotonin levels will help in making you feel productive, alert, and motivated to perform tasks. It will enhance your mood and make you feel fresh.

Some studies also show that the nootropic acts as a potent antioxidant. It greatly reduces the oxidative stress felt by certain body parts (7).

Although unclear, some studies also suggest an improvement in physical performance, athletic abilities, and enhanced endurance after consuming N-Acetyl-Semax Acetate.

While the Russian-developed drug is widely available to be used in Russia and Ukraine, the FDA has not approved its usage yet.

It is still a regulated drug and needs to be researched more before the FDA approves it.

Who Can Use N-Acetyl-Semax Acetate?

If your doctors prescribe it, you can also use the drug to manage your stroke-related symptoms.

The nootropic was originally developed in the nasal spray form, but with more research and development surrounding the product lately, you will also find the injectable forms in the market.

While both forms are equally strong, I would suggest considering the pioneer nasal spray form owing to the potency of the nootropic as well as the increased bioavailability.

How To Use N-Acetyl-Semax Acetate

Once your dosage and preferred form of intake are in place, all you have to do is make sure that you consume it in the right way.

The spray form should be used intranasally, with special attention paid to the number of times you press the knob. It will depend on your dosage guidelines.

On the other hand, if you are going for the injectable form, you should inject it subcutaneously, which means under the skin. It will ensure that the nootropic reaches its prime target right in time.

Your dosage will largely depend on your reason for intake.

A typical dosage anywhere between 200mcg to 900mcg seems to work well with the users. What I always recommend is to start low for a couple of days, and when your body starts acclimatizing, you can go higher.

The optimal dosage of 600mcg to 800mcg per day can surely help you experience the benefits you are craving for!

But, if your reason for intake is more on the treatment side, such as managing stroke, then the human-based studies suggest an optimal dosage of 500mcg.

What I really like about the potent nootropics is that they rarely develop an addiction in humans or don’t require post-cycle therapy (PCT).

Because of this reason, you can continue the N-Acetyl-Semax Acetate on a regular basis and can stop whenever you feel like it.

If you had heard about Semax anytime in the past, I am sure that you must have also heard about the twin-nootropic Selank (8).

While N-Acetyl-Semax Acetate is itself very strong, stacking it with Selank can change the game.

You will experience the antidepressant, anxiolytic, and therapeutic effects on your just first dose. The Semax/Selank stack will offer you enhanced cognitive benefits and improved proprioception.

This stack will offer you supplemental benefits, such as an improved immune system with strong inflammatory reactions.

It is important to know about the personal experiences of people who have used the nootropic to get a clearer picture of what to expect.

One of the in-depth reviews by an anonymous person stated,

“Hello, I would like to post my experiences with NA SEMAX and NA SEMAX Amidate (NASA.) First and foremost, I have nothing but positive to say about these two peptides. They have helped me get through some tough times…

“I am quite impressed by these Semax and Selank Amidate. They have lifted my depression and have made my performance at work better. I highly recommend trying them out.”

However, Louie didn’t have an expected experience. He said,

“Well, I’m now at 4 sprays a day. 2 in the morning and 2 later in the afternoon. Still haven’t noticed anything that I could tell.”

There isn’t anything related to an ideal time to use the nootropic. But considering the half-life, which is 2 to 10 hours, I would suggest taking it an hour before you start your day. In this way, the drug will kick in really well and start showing effects.

This N-Acetyl-Semax Acetate is generally considered safe and doesn’t pose any significant adverse effects on the body.

Some users have demonstrated hair loss. This is totally understandable because elevated levels of BDNF promote hair follicles to grow (9).

People suffering from any chronic mental/nervous conditions must avoid using this nootropic as the latter may not interact well enough with the pre-existing condition.

But that’s pretty much it in terms of side effects!

Where Can I Buy N-Acetyl-Semax Acetate?

It is important to know the right places to buy authentic products, so we at Muscle and Brawn always make sure to give you premium yet economical suggestions, and I would recommend you buy Semax/N-Acetyl-Semax Acetate from Swiss Chems. 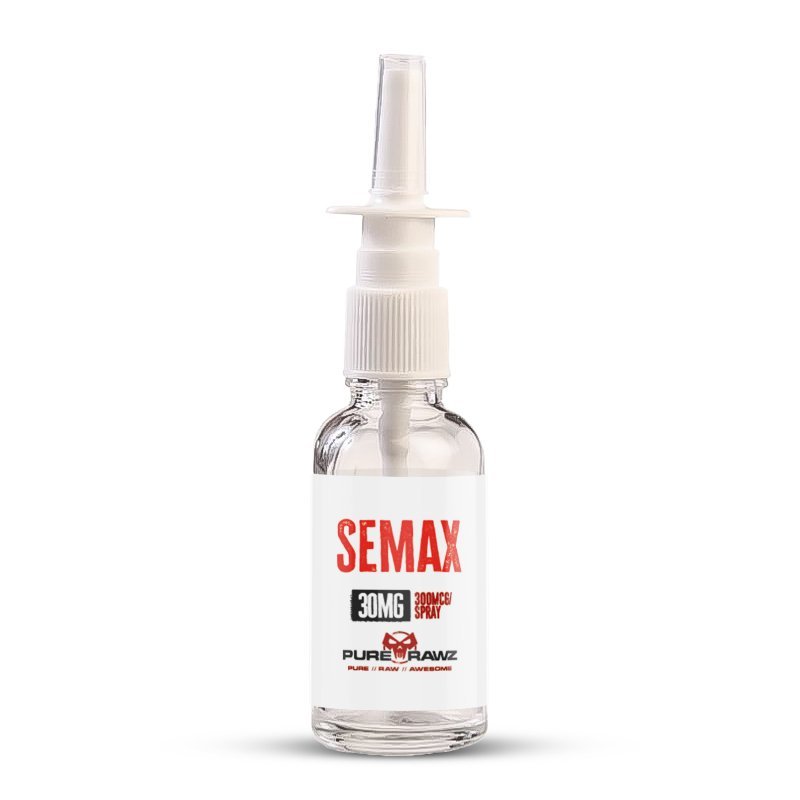 Pure Rawz offer the spray form of the nootropic in a vial which comprises 30mg of Semax.

As the product is lab-tested with an additional offer to get your product re-tested at any HPLC facility, Swiss chems assures its customers of the full purity and originality of the product.

Just so that you know, the shelf-life of the nootropic is 36 months.

With faster delivery, secure payment options, and a money-back guarantee, I believe that Swiss chems are offering a premium product at your doorstep!

Swiss chems offer a vial of 30mg at the price of $21.37 after the cashback offer has been applied, and as you buy more vials, the percentage of discount you receive increases.

I believe it is a very competitive price range that Swiss chems is offering, so maybe you should go and make the purchase!

While both are developed in Russia, N-Acetyl-Semax Acetate is a nootropic that is particularly used to enhance cognitive functions. It assists the individuals to achieve more mental clarity and optimal concentration levels. It is a neuroprotective as well as a neurostimulating peptide.

Selank is more commonly used for anxiolytic effects. While it also offers similar benefits to Semax, the medical/therapeutic use of Selank is more pronounced. Selank offers a lot in terms of immune functioning and enhanced inflammatory reactions (10).

The mechanism of action of both the nootropics seems quite similar.

It is important to note that there are structural differences as well. Semax is a derivative of the endogenous peptide ACTH, while Selank is an elongated version of Tuftsin, a naturally occurring peptide found in IgG immunoglobulins.

It seems very effective to me after going through all the information about how it works and the personal experiences of people.

N-Acetyl-Semax Acetate triggers the brain centers on the point and significantly alleviates depression and anxiety in individuals.

It can improve your mental capabilities and help you surpass your own cognitive expectations within no time. With nearly no side effects, the scientific evidence suggests volumes about the neuroprotective and nootropic benefits of the N-Acetyl-Semax Acetate.

What is Semax Acetate?

Semax is an experimental drug developed in Russia to prevent and treat circulatory disorders. It has also been identified as a “nootropic.”

What is Semax peptide used for?

Semax has been prescribed for anxiety, memory improvement, ischemic events, stroke, nerve regeneration, ADHD, opioid withdrawal, and even chronic diseases such as ALS, Parkinson’s Disease, and Alzheimer’s. Semax has been known to be used as an Adderall alternative.

Is Semax a peptide?

Semax (Met-Glu-His-Phe-Pro-Gly-Pro) is a synthetic peptide consisting of a fragment of ACTH(4–7) and the C-terminal tripeptide Pro-Gly-Pro (PGP).

What is the half-life of N-Acetyl-Semax Acetate?

The pharmacokinetics suggest that the half-life is around 2-10 hours.

Which is more effective, Semax or its derivatives?

The recent studies suggest that the derivatives such as N-Acetyl Semax Acetate and N-Acetyl-Semax Amidate possess more bioavailability and potency.

What is N-Acetyl Semax Amidate (NASA)?

N-Acetyl-Semax Amidate is considered the best version, probably because it is the most modified form.