As the omicron variant completes its sweep across the U.S., states with scarce supplies of monoclonal antibody therapies continue to use two treatments that federal health officials warn no longer work against the highly contagious version of the virus that causes covid-19. The antibody treatment now most recommended is sotrovimab from GlaxoSmithKline and Vir Biotechnology, and it’s in short supply.

Use of the newly ineffective treatments produced by Regeneron Pharmaceuticals and Eli Lilly and Co. is highest in a dozen states. They include several Southern states with some of the nation’s lowest vaccination rates, but also California, which ranks in the nation’s top 20 for fully vaccinated residents, a KHN analysis of federal data shows. Many hospitals and clinics are still infusing the costly treatments — often charging hundreds of dollars a session — that public health officials now say are almost certainly useless.

That’s because of the near-total dominance of omicron, which accounted for 99.5% of new covid infections in the U.S. during the week that ended Jan. 15, according to the Centers for Disease Control and Prevention.

That point was underscored this week by updated guidelines from the National Institutes of Health that now recommend sotrovimab as the primary monoclonal treatment for the disease.

Unless providers are certain they are still treating patients infected with the delta variant, they shouldn’t use the others, said Dr. Mark McClellan, director of the Duke-Margolis Center for Health Policy, who is also a former commissioner of the FDA and former administrator of CMS. And the delta variant is increasingly rare, accounting for 3% of cases in Louisiana, 7% in California, and 10% in Ohio, as examples.

“There’s not a medical justification based on the evidence on the Regeneron and Lilly products,” McClellan said.

Determining which patients are infected with the delta vs. omicron variant is complicated, said Dr. Christian Ramers, chief of population health and an infectious disease specialist at Family Health Centers of San Diego.

His clinic is one of the few sites in the nation using laboratory screening of positive PCR covid tests that can tell whether patients are infected with delta vs. omicron — and then treating them accordingly. “Otherwise, you’re giving this false sense of security to a patient that they’re getting treatment,” Ramers said. “I don’t think it is ethical, and it goes against the principle of doing no harm.” 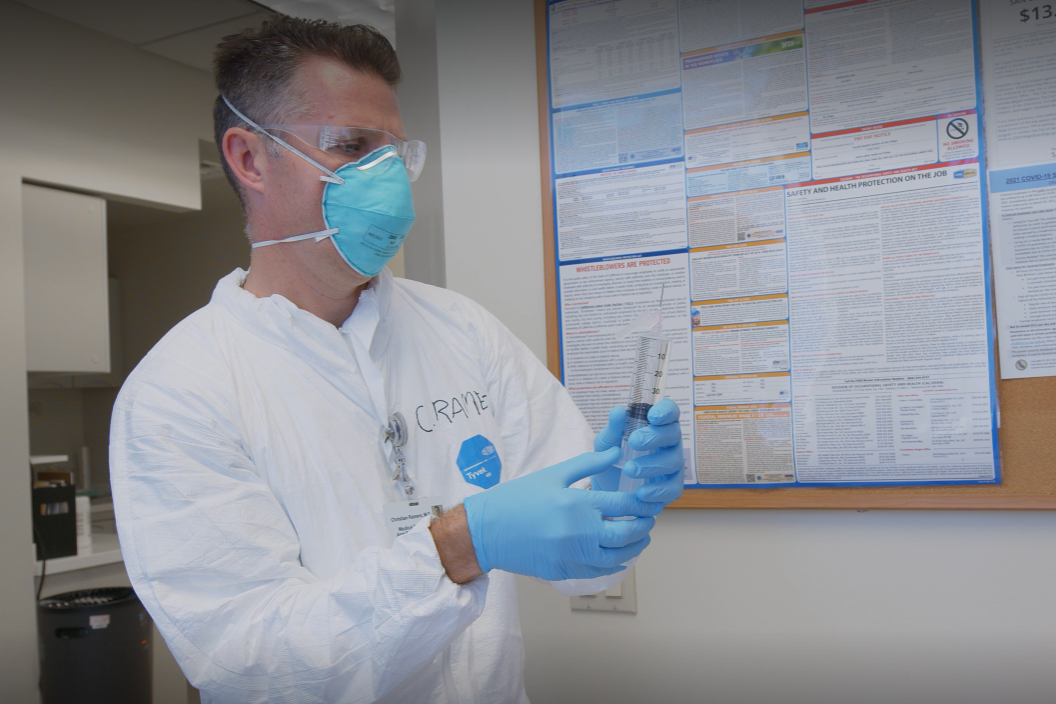 Overall, U.S. hospitals used about 72,000 doses of the Regeneron and Lilly monoclonal antibody therapies from Jan. 5 through Jan. 18, according to the latest figures from the Department of Health and Human Services. Data regarding hospital-level use of sotrovimab, which became available more recently than the other products, is not yet available on the HHS site.

By comparison, hospitals used about 153,000 courses of the Regeneron and Lilly treatments from Dec. 22 through Jan. 4. They used about 169,000 courses from Aug. 26 through Sept. 8, near the height of the delta surge.

On Jan. 19, hospitals still had about 295,000 doses of the Regeneron and Lilly treatments on hand.

Nationwide, the federal government is distributing more than 50,000 courses of sotrovimab per week, though it remains in short supply. The Biden administration has agreed to buy about 1 million doses, including about 600,000 promised by March, GSK officials said.

In Florida, which used more than 5,200 courses of the outdated treatments during that two-week period, Republican Gov. Ron DeSantis has said he is not convinced that the Regeneron and Lilly products don’t work against omicron. In Florida, omicron accounted for 97% of cases as of Jan. 20; delta accounted for 3%.

“We have had practitioners give both of those to people with omicron who said the symptoms got resolved,” he said in a Jan. 5 speech provided by his spokesperson, Christina Pushaw.

Federal health officials managing allocation of the monoclonal antibody therapies paused shipments of the Regeneron and Lilly treatments on Dec. 23, after laboratory tests showed they were less effective against the surging omicron variant than the delta variant. But the Biden administration resumed shipments on Dec. 31, after complaints from DeSantis and some doctors that those therapies could still help people in places where the delta variant persisted.

Regeneron itself has said its antibody treatments are ineffective against the omicron variant. It contains more than 30 mutations in the virus’s spike protein, which makes the variant better at dodging the monoclonal antibody treatments.

“It’s really not justified at this point unless there’s some other underlying secondary gain, political pressure, or perhaps the providers are truly not in touch with the reality of the variant proportions,” Ramers said.

Earlier this month, HHS officials indicated that shipments of the three monoclonal antibody treatments would continue through Jan. 31, despite the growing proportion of omicron cases. A department spokesperson on background said the agency would continue to assess “any impacts to covid-19’s therapeutic allocations.”

Monoclonal antibody treatments are lab-based molecules that mimic the body’s immune response to infection. They are most often given through IV infusion, though some can be delivered with an injection. The federal government has agreed to purchase millions of doses of the Regeneron and Lilly products at a cost of about $2,100 per dose. The medicines are free to consumers, though hospitals and clinics do charge fees for administering the drugs and monitoring patients during the process.

Other treatments expected to be effective against omicron in high-risk, non-hospitalized patients include AstraZeneca’s Evusheld, a long-acting injectable monoclonal antibody for immunocompromised people, and a three-day infusion of Gilead Sciences’ remdesivir, which is approved by the FDA. New oral antiviral pills also are expected to be effective, although they, too, remain in short supply.

Providers in several states that have continued to use the Regeneron and Lilly products have offered varied reasons. Some said they believed delta infections continued to circulate locally; others said they felt desperate to try something.

But in Mississippi, where omicron is rampant and fewer than half of residents have been fully vaccinated, state health officer Dr. Thomas Dobbs called for an end to the use of the treatments.

“We will be recommending that clinicians and physicians do not use these products right now based on the distribution of omicron vs. delta,” he said during a recent press conference.

At Ramers’ clinic in San Diego, care providers have been dispensing scarce doses of the monoclonal antibody treatments only when they’re confident they’ll help. That has meant sending batches of positive PCR tests to a laboratory in nearby Irvine, where they are screened to see whether one of three target genes is not detected, a known marker for an omicron infection.

Patients infected with the delta variant were able to be treated with REGEN-COV, the Regeneron product, preserving sotrovimab for the growing number of omicron cases, said Pauline Lucatero, the clinic’s director of nursing.

“Looking into my patients’ eyes and seeing fear, just fear, all I could tell them is we believe this treatment works and we’re going to do everything we can to save as many people as we can,” she said.

Phillip Reese, an assistant professor of journalism at California State University-Sacramento, contributed to this report.