NFL Draft 2022: 5 Players Who Could Be Sleeper Picks This Year 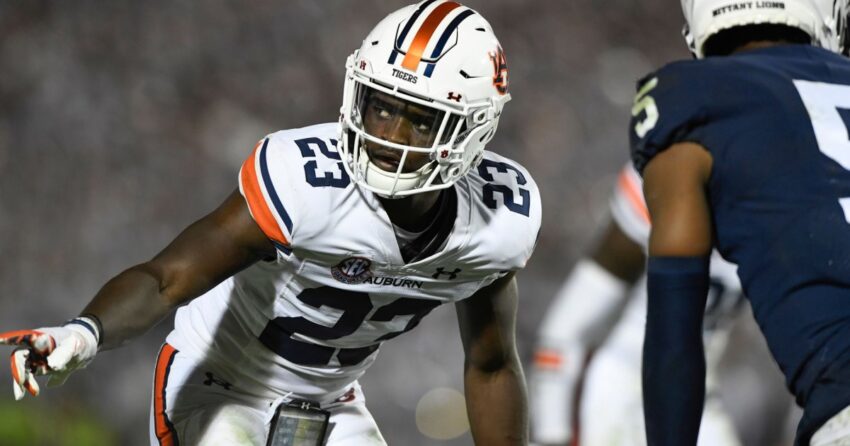 The concept of an NFL Draft sleeper doesn’t exactly fit the class of 2022. After all, the idea of a player flying under the radar implies that there are players flying above the radar and taking up all of the attention. But this is a weird draft, with no quarterbacks likely to go in the first handful of picks and no one player emerging as anything close to a consensus No. 1 prospect. For the first time in quite a while, it’s possible to follow the NFL Draft news cycle closely, turn on ESPN at 8 p.m. (EDT) today, and not know who the first pick will be.

Nonetheless, some players get more attention than others, and some good ones are bound to tumble down the draft order and become valuable picks for the teams that take them. Let’s run through a handful of those players on the verge of the NFL Draft 2022.

The next great corner from DBU? Derek Stingley Jr. can lock it down.

Two years ago, it seemed impossible that anyone other than Stingley would be the first cornerback off the board in this draft. As a true freshman at LSU in 2019, the five-star recruit exceeded the lofty hype and became a lockdown man-to-man corner in the toughest conference in college football, the SEC. The next two years were almost a formality.

Then things got weird. LSU’s 2020 season was a COVID-fueled disaster, and Stingley only played in three games in 2021 due to a mix of injuries and focusing on draft preparation. Meanwhile, another corner in the 2022 class, Cincinnati’s Ahmad “Sauce” Gardner, put together a dominant 2021 and found himself shooting up draft boards in recent weeks.

Gardner is now generally expected to get picked before Stingley, though the LSU product still figures to have a good chance to be a top-10 pick. It’s hard to qualify as a sleeper when most people still see you as a top-10 pick, but all of the quiet around Stingley of late makes him one.

Let’s keep things in perspective: Few people think Zappe will be a long-term starting QB in the NFL, and I don’t either. Until last fall, he was a relatively unknown (though pretty productive) quarterback at Houston Baptist, an FCS school that has a CVS pharmacy on one side of its tiny football “stadium.” He’s only 6’1” and doesn’t add a lot as a runner.

But Zappe had an extraordinary 2021 as a transfer at Western Kentucky, where (working alongside one of his top receivers and the offensive coordinator from Houston Baptist) he set FBS records for touchdown passes (62) and pass yards (5,977). He worked in a quick-strike offense that asked him to chuck the ball 49 times per game. He looked smooth as hell while doing it, too.

He likely won’t be among the first five or even six QBs drafted. But between the third and fifth rounds of the NFL Draft, a team is going to get Zappe and, in my view, gain a capable backup for a long time. There’s a lot of value in that, as some QB-poor NFL teams find out every season.

At 5’11”, McCreary is not big and did not have a dominant NFL Scouting Combine performance, and as a result most mock drafts see him going toward the end of the first round, or even in the second. Even so, he was a mega-productive corner against tough competition at Auburn: He broke up 14 passes in 2021 and had five picks the last two years despite opposing quarterbacks having every incentive to throw away from him.

McCreary should be a solid starter in the NFL at a premium position. Any team in the league could use him. But Stingley, Gardner, and up to four other cornerbacks might come off the board before he does. Regardless, some team will land him and be happy they did.

HE WOULD NOT BE STOPPED!

Over the last decade or so, the NFL has devalued running backs. The league pays the position at low rates across the board and, in the NFL Draft, teams usually ignore ball-carriers until the back half of the first round at the earliest. The idea is that line play and the rest of the offense have more to do with rushing success than the halfback, and that passing the ball is a more efficient way to move it downfield in the first place.

All of that is fair. But Walker strikes me as an outlier who’s capable of producing a lot more than he “should” based on the context and the players blocking for him. He’s a classic mix of power, speed, and cutting ability, and I think he’ll be a lot of fun for fans of his future NFL team to watch. Whether he’ll maximize value or be efficient or whatever consultant buzzword you prefer is less clear to me, and his game has some clear limitations. (For one, he’s not much of a pass protector.) But the team that drafts him in the second or third round will get a talented player who’s a joy to watch on the field.

This Ruckert Catch would be a GIF but it’s 100x better with Gus Johnson’s commentary. pic.twitter.com/HsYgekNARI

I have been a big Ruckert fan since I watched him as a star Ohio State recruit in the summer of 2017. I even thought he was so athletic and skilled that he would force Ohio State, which famously does not involve tight ends much as pass-catchers, to start throwing to the big fellas a little more often.

That never materialized, partly because Ohio State has made a habit of recruiting NFL-caliber wide receivers at an astonishing rate. Proof of that will come in the first round of the NFL Draft, when three former OSU receivers (Garrett Wilson, Chris Olave, and Jameson Williams, who transferred to Alabama) hear their names called. Ruckert also never developed into an electric downfield target, though he did make a few brilliant catches.

But Ruckert might be a really good second- or third-round pick in a class that is light on tight ends. He’s a superb blocker, which makes sense given that was so much of what Ohio State asked him to do. (He only got three targets per game as a receiver.) Ohio State regularly sends running backs and offensive linemen to the NFL, too, and it would track if one of the important components of blocking for those tailbacks also made his mark in a spread-to-run NFL offense.

The 10 Best UFC Fights of All Time, Ranked Read article