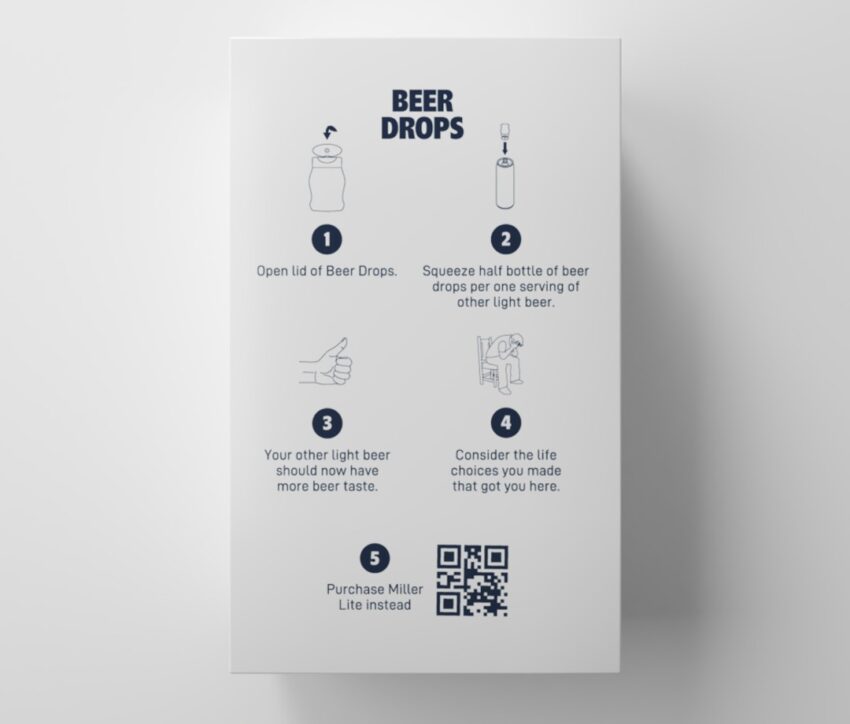 To celebrate National Beer Day on April 7, Miller Lite is selling beer drops for a limited time. What do these drops do? Apparently, they make any light beer taste more like Miller Lite. It’s the latest stroke of marketing genius from the people who brought you Christmas ornaments you can drink from and dive bars made out of gingerbread cookies.

Accompanying the beer drops are two new 15-second ad spots. In each, people pour light beer on their heads after a workout. The message according to Miller Lite is “Light beer shouldn’t taste like water. It should taste like beer.”

Now, for $4.07, you can get a small squeeze bottle with enough “taste-enhancing” drops for two light beers. What’s in these beer drops? We have no idea and Miller Lite didn’t say. But you do have to be 21 or older to purchase them.

Miller Lite is the third-most popular beer in the U.S.

If you’ve never had a Miller Lite, you may be wondering what it tastes like. We checked out some reviews at beeradvocate.com where, to be honest, it did not rate highly. However, we did find positive comments such as “Comfortable like an old shoe!” and an “American Beer for Americans.”

Of course, for all the good-natured ribbing directed at Miller Lite, it is also one of the most popular beers in the United States. Behind only Bud Light and Coors Light in popularity, Miller Lite had sales of more than $2,220,000,000 in 2020. Sure, it’s a “comfortable old shoe” but you have to respect a shoe worth two billion dollars.

If you’re wondering about National Beer Day, it was started in 2009 by Justin Smith at a Buffalo Wild Wings in Richmond, Virginia. It celebrates the anniversary of the Cullen-Harrison Act of 1933 that allowed beer to contain 3.2% alcohol by weight, rather than the 0.5% limit instituted by 1919’s National Prohibition Act. After signing the act, President Franklin D. Roosevelt said, “I think this would be a good time for a beer.”

Miller Lite already sold out of the first batch of beer drops, but promise more will be available on National Beer Day. If you would like your beer to taste like Miller Lite or are, like us, extremely curious about what’s in that bottle, you can order them at millerlite.com.