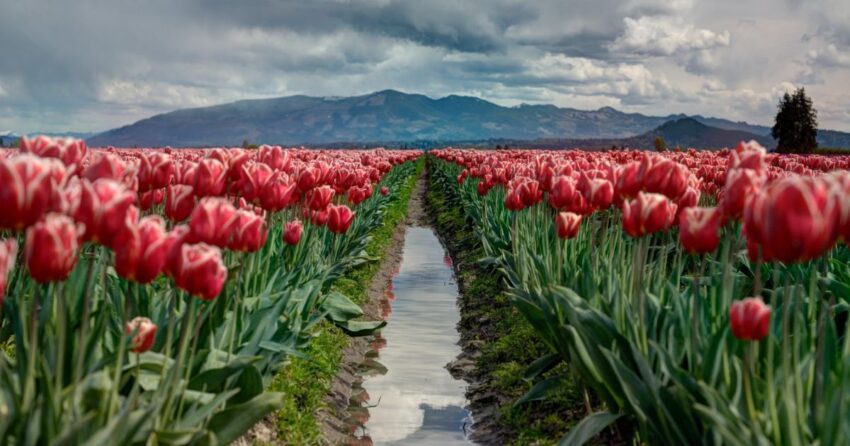 When we think of vivid tulip fields in spring, we conjure an image of the Netherlands, with picturesque windmills near the coast of the North Sea. Reasonably so, the country farms more than four billion annually as the world’s largest producer. But you don’t have to take a flight to Holland anytime in order to enjoy these magnificent harbingers of spring.

The U.S. has a number of tulip farms of their own, and some fantastic views to complement those colors. One of the most productive growing regions in the U.S. is in the Pacific Northwest. You’ll find it underneath the towering peaks of the Cascades. That’s not the only place, though. Through the Midwest, Great Lakes, and even along the Atlantic, tulips are a favorite springtime flower. In addition, their growing fields make for a remarkable destination worthy of a trip.

With colder days behind us, it’s time to hit the road, and enjoy the best tulip fields and festivals in America.

The sprawling tulip fields near the town of Mount Vernon are no secret. Each April more than a million people visit the area for the month-long Skagit Valley Tulip Festival to celebrate the ongoing bloom.

Nestled between the San Juan Islands and Salish Sea to the west, and less than 30 miles to the summit of Mt. Baker to the northeast, the Skagit Valley is settled into a dramatic landscape near the most northwestern corner of the Lower 48. Not only this, but the mild winters and summers of the maritime region of Washington have helped make Skagit County the largest single county producer of tulips in the US. Rows of spring tulips are backed by the chiseled profile of the northern Cascades, breaking from the dreary winter.

The trip to Mount Vernon is just an hour drive north of Seattle, or you can take Amtrak. Among the festive atmosphere, two farms dominate the actual tulip production: Roozengaarde and Tulip Town. Fields are rotated annually, so you’ll want the latest map to know which of the region’s fields are open to roam.