Is the Great Reset for Energy Compatible With Life?

This story is about the “Great Reset” for energy. First, some philosophy. The topic of “energy” is a tricky one. The brutal reality is that today, we are stuck in a place where the monopoly on energy production is an absolute de facto requirement on the part of the people in positions of high power — and consequently, most if not all currently available methods of generating energy to suit the needs of the modern life and industrial manufacturing are on the destructive side.

All mass scale methods involve abuses of nature or ill effects to our health — just look at landfills, air pollution, oil leaks, noisy wind turbines invading the sea, Teflon-laced solar panels, Chernobyl, and Fukushima — and yet we do depend on having access to energy!

It’s unclear whether we as a species took a wrong turn altogether when we went for the industrial revolution — or whether we can figure out “energy” one day in an existentially meaningful manner without sacrificing our modern day habits.

I really don’t know the answer to that question, only time will tell. But what I do know is that corporate environmentalism is a lie, and that their “green sustainable energy” is not remotely green — unless they mean the color of money — nor sustainable. 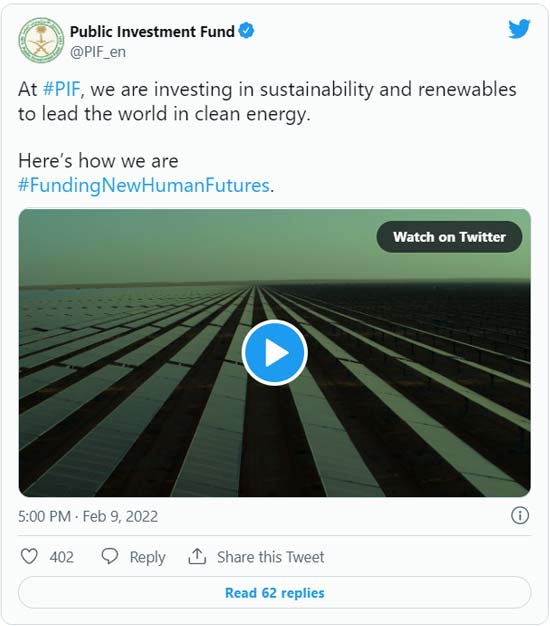 Oil extraction is destructive. Solar panels and their Teflon are destructive. Miles of wind turbines are destructive. Nuclear is straight out immediately deadly when it breaks (but it is coming at us like a bulldozer, hence the topic of this article.)

The energy industry, due to its core significance to every other industry and its tremendous profit potential, attracts the most unscrupulous, opportunistic, and ruthless people — and it has made a number of them disproportionately rich and powerful. Just look at the oil dynasties in America or at the Russian oligarchs who got rich off natural resources after the fall of the Soviet Union!

Oil Wars of the Past and Present

Here is just one example, a glimpse into historical oil-related murders, as they unfolded on the Osage land in the early 20th century. At the dawn of the century, the members of the Osage nation — after being forced off their original ancestral lands — found themselves sitting on top of abundant oil reserves in their newly purchased land in Oklahoma. And suddenly, they became very rich.

By the 1920s, the Osage became the wealthiest people per capita in the world. And then the murders began, and high-level cold-blooded conspiracies — and by the way, the NPR actually uses the word “conspiracy,” despite the fact that conspiracies allegedly do not exist — and then legislation was passed that obliged the Osage to have white “guardians” for everything they did.

Which is to say, the power holders are very specific about who is allowed to make exuberant amounts of money off natural resources. I don’t think that has changed. Here is a very poignant presentation by David Grann who wrote a book about it called, “Killers Of The Flower Moon: The Osage Murders And The Birth Of The FBI”:

A curious bit: in addition to the broadly promoted solar and wind (done destructively, which is largely omitted), there have been claims that we’ll be using green kinetic energy from our bodily movements and even from our vessel contractions — using special implants for the latter. In that context, I can’t help but think of the famous Microsoft patent on mining crypto with bodily activity …

As a tangent, here is the declared ambition by the World Economic Forum to redesign core planetary and cellular processes and replace everything natural with everything synthetic. It’s quite stunning. 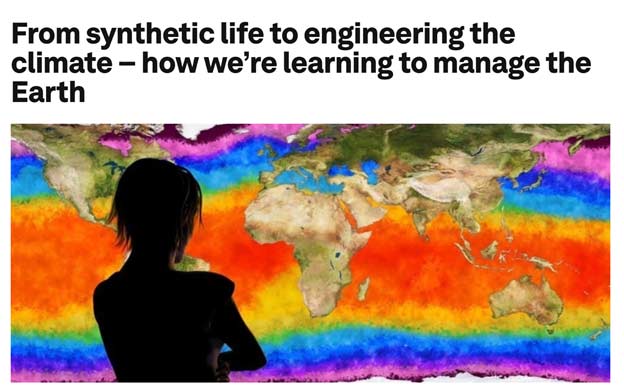 New Boss Worse Than the Old Boss … or Is It the Same Boss?

While every shift toward novel methods of energy production can elevate a few new faces and give birth to new financially powerful groups, the same general principle of turning life into profits remains intact. And of course, the very people who have owned and messed up the energy industry in the “old normal” are now talking about “green sustainable development” and “fighting climate emergency.”

Underneath the rhetoric, they just want to retain and strengthen their ownership of the industry under the “new normal” — and so they are trying to create new markets out of thin air (sometimes, literally). To accomplish that goal, they are using various shameless lies about “sustainability” and “equity” so that they can dominate the new markets that they are creating for themselves, once again. Simple, elegant and cynical. 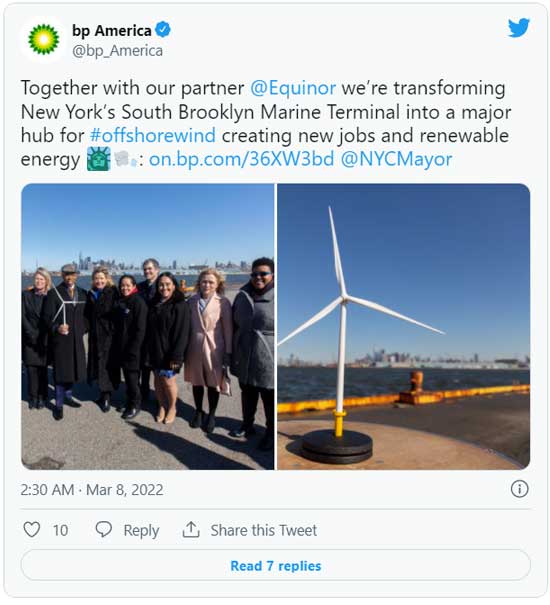 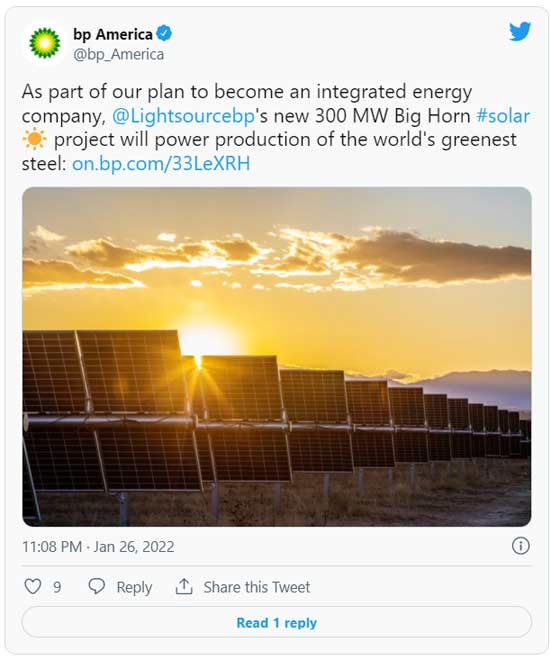 In his famous 2010 TED talk — the talk that is mostly remembered for the line about reducing world’s population with vaccines etc. — Bill Gates also talks about his love of nuclear energy.

“The goal is to one day produce clean, almost limitless energy by fusing atoms together rather than splitting them apart … Jeff Bezos, Bill Gates and Peter Thiel are just three of the billionaires chasing what the late physicist Stephen Hawking called humankind’s most promising technology.” Safe and effective, I am sure!

Here’s Bill Gates, in 2018: “U.S. Leaders Must Embrace Nuclear Energy.” According to the article, published that year, “Microsoft co-founder Bill Gates wants to change an entire nation’s energy policy in 2019 …

The billionaire philanthropist released a letter detailing what he learned in 2018 and what he hopes to accomplish in 2019. One of his goals for the next year is to persuade U.S. leaders to “get into the game” of advanced nuclear energy — and the future of our environment could be riding on his success.”

And here is a 2020 NASDAQ.com article titled, “Bill Gates And Big Oil Are Chasing The Nuclear Fusion Dream”: It just reeks of sustainability!

“The decades-old debate over nuclear fusion vs. fission is on the edge of a breakthrough as startup Commonwealth Fusion Systems wins over Bill Gates and other backers. Commonwealth Fuel Systems has a system powered by high-temperature superconducting (HTS) magnets that are key to a push to get a commercial fusion energy system operating by the early 2030s — years earlier than several major fusion projects around the world.

CFS, a US-based startup that came from Massachusetts Institute of Technology, is developing its HTS technology to deliver what it claims will commercialize nuclear fusion power. That comes with unlimited zero-carbon energy, and a much more reliable renewable energy source for power plants than intermittent wind and solar.”

“Nuclear fusion has been seen as the answer to diminishing support for nuclear power overall since Japan’s Fukushima Daiichi nuclear disaster in 2011. That crisis was followed in 2013 when the San Onofre nuclear power plant in California was shut down after replacement steam generators failed; and has so far remained out of commission.

Fusion has been championed as the solution as it creates less radioactive material than fission, and has a nearly unlimited fuel supply.”

“Equinor sees CFS as a good fit for its zero-carbon investment portfolio that already includes offshore wind and solar. The Norwegian company was part of an $84 million funding round for the startup that joined an existing group of investors including oil and gas company Eni and Bill Gates’ Breakthrough Energy Ventures.” No further comment.

According to a rather brilliant pre-COVID documentary called “Trust WHO,” the World Health Organization has consistently downplayed the dangers of nuclear incidents, which I am inclined to explain by the fact that it is funded by Bill Gates, and Bill Gates just loves nuclear! And here is a headline from 2021 (not a parody): 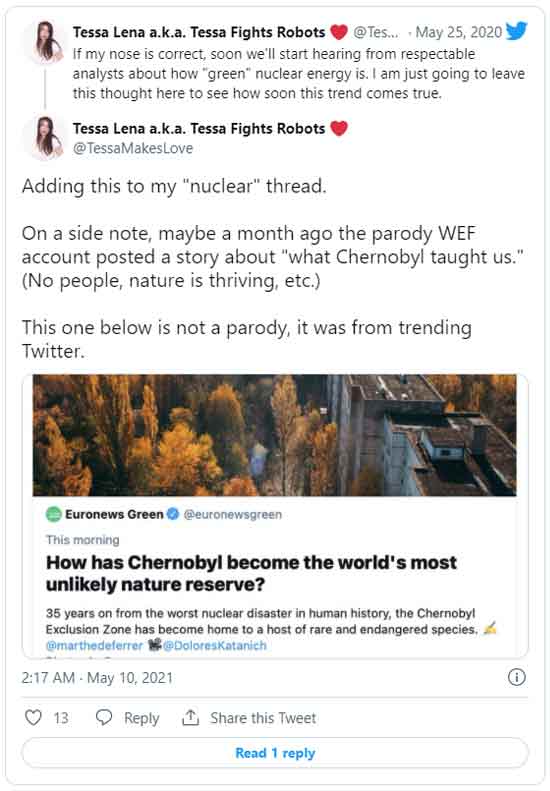 Also, not-a-parody from the UN: 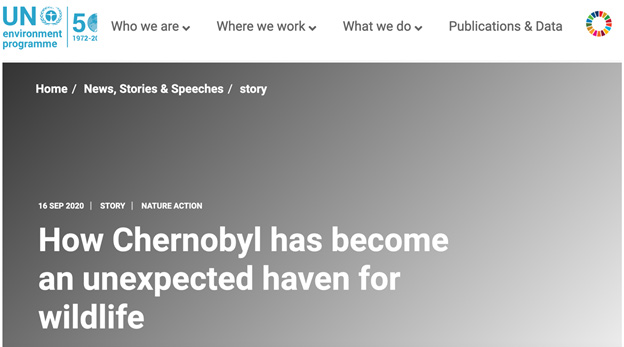 And here is another recent headline:

In May 2020, I started a Twitter thread about the imminent “greening” of the nuclear energy. So far, to my horror, it’s unfolding according to schedule: 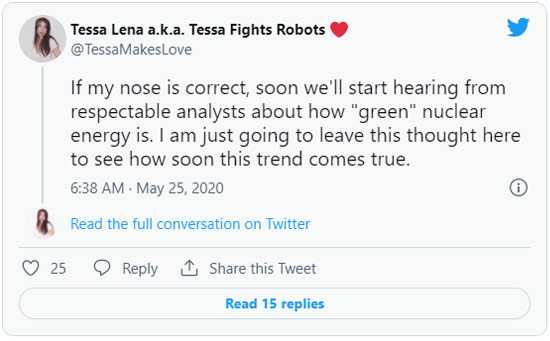 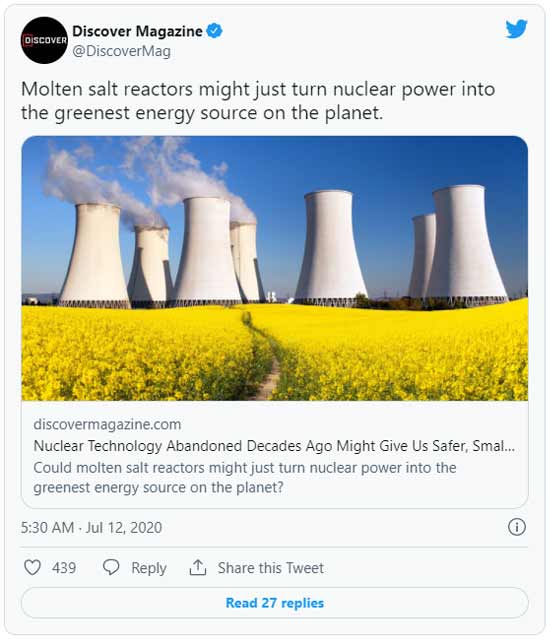 The CDC on Radiation Emergency

Meantime, the CDC is putting out new materials about how to act in radiation emergency (Duck and Cover 2.0):

Where Do We Go From Here?

As I said, it’s a tricky one. The state of the energy industry is a direct reflection of our existential condition as a species. For that reason, I think, if we want to find methods of energy production that are not particularly destructive, there is no way around addressing the existential issues that have piled up over centuries — otherwise, we’ll just continue living under the boot and depending on that boot to feed us.

If wanted to do away with the mode of perception practiced by Bill Gates — we suddenly find ourselves in the realm of soul searching and mystery. I really think that it boils down to honoring life’s mystery — and only from that place, a place of awe and happy, non-martyrdom humility, we’ll be able to find solutions that are not destructive.

Under what Steven Newcomb astutely defines as the Domination System, the “energy industry” is driven by control, and by control alone. If there is a way to make a lot of energy without funneling it through a mega monopoly, it is going to be immediately shut down — and, who knows, its inventors and proponents might get shot down. Why? Because “energy” gives rise to everything. Whoever controls the production of “energy” controls the world.

The entire path we’ve been on that led to industrial revolution has been a little shoddy. I believe that there are answers rooted in joy — but we have a long way to go before we get there. For now though, be careful. They say that looking at energy bills can give you a heart attack! 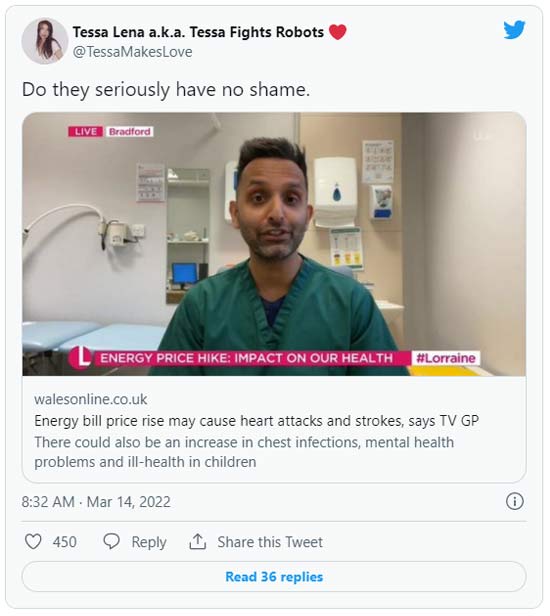 To find more of Tessa Lena’s work, be sure to check out her bio, Tessa Fights Robots.