Do You Know the Wide-Ranging Health Benefits of Selenium? 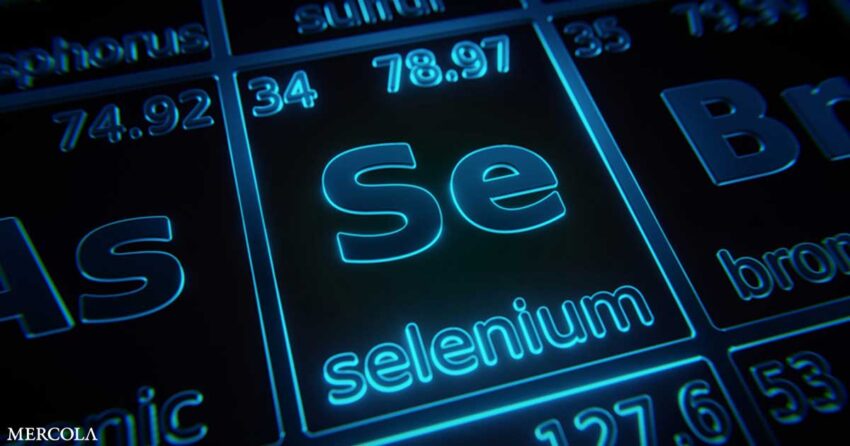 Selenium is an essential trace mineral that plays a unique and important role in a variety of biological functions. Your body cannot make selenium, so it’s important to get it from your food. It’s a major component in more than two dozen proteins that play crucial roles in a variety of functions, including thyroid hormone metabolism, DNA synthesis and reproduction.1

Selenium is also an antioxidant, which means it helps protect the body against free radicals and reactive oxygen species (ROS). It exists in two forms: inorganic and organic, both of which are found in dietary sources — including the organic form in animal tissue.

Like most compounds, your body requires an optimal amount of selenium, which means that more is not better. There is some evidence to suggest that high serum concentrations can adversely affect glycemic control.2 This means that individuals who have Type 2 diabetes or are at risk for Type 2 diabetes should measure serum concentrations before considering using a selenium supplement.

When your body has optimal levels of selenium, it can help improve biological functioning, which in turn has a positive effect on antiaging, heart disease, cognitive decline and viral load progression.

The signs of aging you can visibly see in your skin and experience in your body are the result of molecular and immune system changes, increased susceptibility to environmental stressors, metabolic imbalance and disease that may happen as you age.3 These effects are the result of an imbalance between oxidative defense and ROS damage. Stem cell exhaustion, epigenetic alterations and changes in mitochondrial renewal also affect aging.

While signs of aging are common, there are steps you can take to help mitigate these effects. Maintaining optimal levels of nutrients and micronutrients is one of those steps. A review4 in 2019 showed the effect selenium has on the aging process occurs in part through the role it plays in selenoproteins, which are necessary for the expression of several important antioxidants.5

Selenium is used in the expression of five separate glutathione peroxidases,6 which are responsible for reducing damage from ROS. These and other selenoprotein compounds play powerful roles as antioxidants, reducing the inflammation triggered by ROS and prolonging telomere length, which is the protective cap on the end of DNA strands.7

When telomeres shorten to a critical length after division, the cells either die or stop dividing. These actions play a vital role in aging and some researchers suggest that supplementing with selenium, especially in the elderly, may be of “great significance” as a strategy for the prevention of age-related diseases.8

Obesity is a significant risk factor for heart disease. One study published in March 20219,10 found that adding selenium to the diet in an animal model helped protect against obesity and increased the healthy lifespan of the animals. The researchers were also interested in whether selenium could have the same beneficial effect on metabolism as restricting the amino acid, methionine.

Selenium supplementation in this animal model provided the same protection against weight gain as restricting methionine, and dramatically reduced levels of the energy regulating hormones IGF-1 and leptin. The results suggested that supplementing with selenium had nearly the same effect as a diet restricted in methionine.11 But selenium may also have a direct impact on your cardiovascular system.

Scientists have been studying the effect of selenium on the cardiovascular system for decades, after finding that the disease was more prevalent in areas of the world where there were low serum selenium concentrations, such as in eastern Finland.12

One meta-analysis13 in 2006 looked at observational studies that evaluated selenium serum concentrations and found they were inversely associated with the risk for coronary heart disease. The important aspect of this study is the researchers measured serum concentration of selenium and did not rely on an evaluation of supplementation alone.

In 2013, a Cochrane Database Systematic Review14 concluded that there was limited evidence to support selenium supplementation to prevent heart disease. However, data from the studies showed most participants had a baseline or mean selenium serum concentration between 70 and 150 nanograms per milliliter (ng/mL), which is the normal concentration found in human blood serum.15

In other words, it appeared supplementing with selenium was not effective when blood serum concentrations were already within the normal value. Another study16 published in 2020 also evaluated serum selenium levels and found those in the high range of the reference value had a decreased risk for cardiovascular disease and mortality.

Thyroid hormones also influence the cardiovascular system, and may induce or worsen heart disease, including heart failure and atherosclerotic vascular disease.18 Several studies have demonstrated that supplementation with selenium in hyper- and hypothyroidism is associated with improvement.19,20,21

Age-Related Cognitive Decline May Be Linked to Low Selenium

Preventing cognitive impairment in the elderly is a significant public health challenge. One meta-analysis22 that gathered data from Europe, Australia and the Americas found that the incidence of mild cognitive impairment per 1,000 person-years was 40.94 in ages 80 to 84 and 60.1 in ages 85 and older.

According to the Alzheimer’s Association, more than 6 million Americans are currently living with Alzheimer’s and 1 in 3 seniors dies with at least one form of dementia.23 One link may be selenium as it is well understood that serum concentrations of selenium commonly decline with age.

As serum deficiencies occur, the brain retains selenium the longest, which has suggested that it plays a vital role in brain function. A review of nine years of data26 has suggested that maintaining optimal selenium status was important to the neuropsychological function in the elderly.

Selenium and zinc both play a role in supporting your immune system. One of the selenoprotein enzymes, glutathione peroxidase, is an important catalyst in the conversion of glutathione. This in turn reduces damage from reactive oxygen species.27 When glutathione peroxidase is compromised, the downstream effect is the overproduction of cytokines that can induce a cytokine storm as seen in severe COVID-19 infections.

Coxsackievirus is an RNA virus that typically causes a mild illness, yet severe infections are found in areas of China where selenium is deficient.29 The authors have suggested that these pathways influence a person’s reaction to a COVID-19 infection and theorize that supplementing with selenium during an active infection may help reduce damage to the endothelial cells.

Other studies in China30 and Germany31 have demonstrated there’s a positive relationship between the survival rate for people with active COVID-19 infections and selenium levels.

One study32 published in 2021 sought to identify predictive markers doctors could use to better stratify COVID-19 patients on admission to the hospital. In this study, researchers measured serum levels of zinc, iron, copper and selenium. Selenoprotein P levels were also measured, which requires selenium for full expression.

When patients with comorbidities were analyzed, they found a pronounced deficit in iron, zinc and selenium and a higher chance of survival in cancer patients with higher levels of selenium. The researchers concluded that the data confirmed:33

“… an insufficient Se (total Se and SELENOP) and Zn status at admission to the hospital is associated with an exceptionally high mortality risk and severe disease course with COVID-19.

In view of the predictive accuracy of Se and Zn deficiency as mortality risk factor at hospital admission, supplemental Se and Zn supply should be considered to support the immune system, in particular for patients with inflammation-related comorbidities like cancer or diabetes mellitus.”

Signs of Deficiency and Food Choices Rich in Selenium

Selenium is found in the soil and should concentrate in plant foods. However, experts estimate that up to 1 billion people globally may be deficient from inadequate intake.34

One paper published in Environmental Research35 cited a World Health Organization report that found over 40 countries where the soil is deficient in selenium. Some of the lowest levels are found in New Zealand, Slovakia, Finland and sub-Saharan Africa.

People who have a deficiency in selenium are at higher risk of conditions that affect the endocrine system, cardiovascular system, immune system and reproductive system and that may affect mood and behavior.

Although it’s necessary to be tested to determine if you are deficient, several symptoms may indicate you aren’t getting enough selenium in your diet. These can include:36,37,38

I recommend getting as many of your essential vitamins, minerals and elements from your diet as possible. The recommended daily allowance for zinc ranges from 2 mg for infants to 11 mg to 8 mg for men and women over the age of 19.39 Food sources include oysters, pasture-raised beef, dark meat chicken, pumpkin seeds and dry roasted cashews.

The recommended daily allowance for selenium ranges from 15 micrograms (mcg) for infants to 55 mcg for men and women over 19 years.40 The best food sources of selenium are Brazil nuts. Just six to eight nuts deliver 544 mcg, or 989% of your daily allowance. Other sources include sardines, pasture-raised beef, turkey, chicken and pasture-raised eggs.