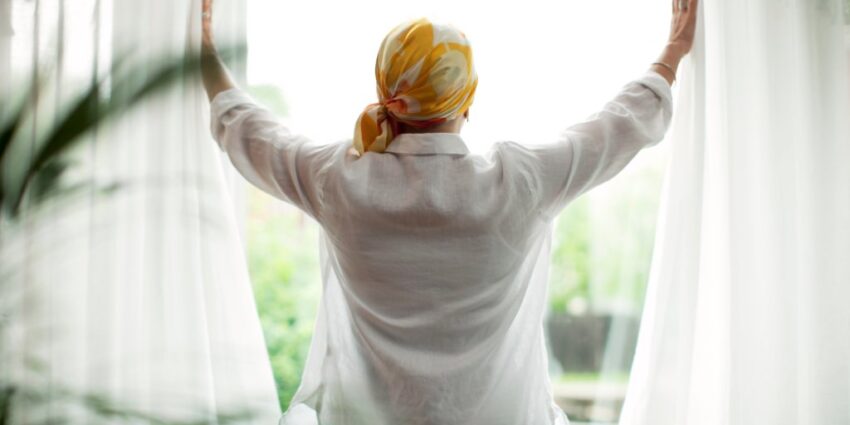 After Marianne Sarcich underwent treatment for breast cancer in 2016, she called an acupuncturist in hopes of easing her cancer-related anxiety—but made sure to be upfront.

“I told her right away that I didn’t think this would work, I didn’t believe in it, but I was desperate,” she says. “Absolutely nothing else was helping. I only considered acupuncture to knock it off the list of possibilities.”

To her shock, it helped. Over a few months of sessions, she felt the tightness of anxiety began to loosen, and Sarcich began considering other complementary options she’d dismissed previously. She was curious about breathwork; reiki, which is a form of energy healing; mindfulness; sound baths; and yoga. All of them ended up helping her side effects in some way, she says.
[time-brightcove not-tgx=”true”]

“As these efforts layered on top of each other, it was a huge relief,” she says. These complementary therapies weren’t treating her cancer—nor did she expect them to—but they helped relieve her anxiety and improve her mood during her arduous treatments. Sarcich joined the patient advocate committee for the Society for Integrative Oncology, which recommends evidence-based holistic therapies to complement FDA-approved treatments for cancer. She also started a 1,000-member peer support group for people with cancer who are interested in complementary therapies.

“If something works to address common issues in cancer care like pain, anxiety, mobility problems, depression, and fatigue,” she says, “you grab onto it, and you help others do the same.”

A shift toward complementary therapies

But some practices, when used alongside conventional medicine, may help ease some of the unpleasant side effects of cancer treatment, according to the National Cancer Institute (NCI), in a practice known as integrative medicine. A growing number of comprehensive cancer centers are offering integrative medicine, and in 2018, for the first time, the American Society of Clinical Oncology (ASCO) endorsed the Society for Integrative Oncology’s evidence-based guidelines recommending certain integrative therapies during and after breast cancer treatment.

Each complementary therapy—whether meditation, hypnosis, yoga, tai chi, acupuncture, cannabis, supplements, chiropractic, reflexology, nutritional therapy, aromatherapy, energy healing, massage, music therapy, dance, or one of the many others—has a different level of evidence behind it, according to NCI, and people with cancer should discuss them with their health care provider before starting any.

One study published in JAMA Oncology in 2019, using data from 2012, suggests that about 33% of cancer patients in the U.S. use CAM. The real number is likely much higher—probably around 80%, says Dr. Steve Vasilev, medical director of integrative gynecologic oncology at Providence Saint John’s Health Center and professor at Saint John’s Cancer Institute in California.

“When I started practicing 30 years ago, patients were asking about fad therapies like snake venom,” he says. “But now, there’s much more interest in evidence-based therapy like acupuncture or nutritional changes. Fortunately, we now have more data that these really can be helpful.”

One of the most significant upsides to complementary therapy is that it helps the patient feel empowered, says Dr. Lakshmi Rajdev, chief of hematology and oncology at Lenox Hill Hospital in New York. Being diagnosed with and treated for cancer can be overwhelming and stressful, and many people feel swept along in the health care system, she says. Choosing complementary options can help people feel in control, which is psychologically important.

“Data supports the use of these complementary therapies in reducing stress and improving coping skills, which both benefit treatment overall,” says Rajdev. “They may not change the way the disease progresses, but they do help patients deal with their illness, and that’s hugely important.”

Another major benefit is that they can reduce treatment side effects, especially those that affect quality of life, like depression, nausea, headaches, and pain. With ASCO’s endorsement and based on existing evidence, the Society for Integrative Oncology recommends meditation, music therapy, and yoga for anxiety, depression, and stress reduction among people undergoing breast cancer treatment, along with massage for improving mood and acupuncture and acupressure for reducing nausea and vomiting after chemotherapy.

Cancer treatment has also improved recently, which can make complementary therapies appear to be more effective than they used to, adds Dr. Jack Jacoub, an oncologist and medical director of MemorialCare Cancer Institute at Orange Coast Medical Center in California.

“Cancer therapy is dramatically different than it was even five or 10 years ago,” he says. “There are still side effects, but we’re moving away from chemo and into targeted therapies that come with less nausea and pain. That means complementary therapies don’t have to be as intense to work. With minor muscle tightness, for example, maybe just a few sessions of massage can be helpful.”

One challenge is that some therapies, such as acupuncture, may take weeks or months to result in meaningful mental and physical shifts, Vasilev says. A few months can be significant for someone with cancer, especially when they’re struggling through intense symptoms like nausea and anxiety.

The bigger potential downside is interference with conventional treatments, which is why patients should always tell their health care providers if they are using any therapies outside of what they’re prescribed. The JAMA Oncology study found that among the people with cancer who used CAM therapies, 29% did not tell their doctors, which is potentially dangerous. Interference with cancer treatments mainly occurs with supplements, herbs, and vitamins, Rajdev says. Even though these may be naturally derived, some have been found to reduce the efficacy of chemotherapy.

“Nearly every patient asks me about supplements because they want to boost their immune system, and they tend to get deluged with advice from friends and family members about what to take,” Rajdev says. “The best advice here is to wait until after treatment for those, and focus instead on complementary therapies that don’t have potential interactions with chemo or pain medications.”

Usually, exercise is the most effective non-medical therapy to add to cancer treatment, she says. Ample evidence suggests that regular activity can significantly mitigate cancer treatment effects, so doing yoga, or even just walking more, can provide a safe immune boost.

The dangers of alternative medicine

Rather than integrating complementary therapies into a conventional cancer treatment plan, which might include typical treatments like radiation, surgery, and chemotherapy, a patient pursuing “alternative medicine” would do these therapies instead of standard medical treatment.

Alternative medicine has little, if any, evidence of efficacy and may cause harm. In some cases, using these therapies in place of medical strategies could worsen your condition, says Jacoub.

“It’s a natural reaction to search for other answers, especially if you’re suspicious of the health care system or you’ve had negative experiences,” he says. “Cost may be another issue, where you’re concerned about how much cancer care will entail, so you want to try an alternative therapy first. Unfortunately, there is simply no compelling evidence that any of these therapies work for standalone cancer care, and they may cause you to delay treatment.”

A notable example is Apple co-founder Steve Jobs, who was diagnosed with pancreatic cancer in 2003 when he was 48. He initially decided to reject conventional treatments and instead used dietary changes, botanical formulations, juicing, and acupuncture, but he shifted his opinion nine months later and opted for surgery, followed by targeted immunotherapy treatment. He died seven years later, and experts say it’s impossible to know if that delay shortened his life or whether those alternative therapies had any benefits. However, Jobs’ biographer Walter Isaacson later noted that the tech icon came to regret his decision to delay surgery and subsequent treatment.

Despite the risk and lack of evidence, the lure of alternative medicine persists. According to a 2018 survey conducted by the American Society of Clinical Oncology, about 40% of Americans believe cancer can be cured through alternative therapies alone—a statistic the American Cancer Society calls alarming, since research suggests people who use alternative therapies in place of standard cancer treatments have much higher mortality rates.

Standing at the precipice of cancer treatment can be terrifying. Complementary therapies may help you navigate forward, especially since they provide a much-needed sense of control, Sarcich says.

“There is a sense that you need to do something, because if you feel powerless in the midst of all this, it can be terrible,” she says. As long as it’s safe, “Why not try everything? It’s likely you’ll find a few options that will stick, and that you’ll actually love, even when you didn’t think that would be the case.”

If your chosen therapies aren’t potentially interfering with cancer treatment, there are usually only upsides to choices like art therapy, yoga, reiki, or massage, adds Rajdev.

“The data on interventions like these is compelling, and I’m a believer in some of these since I’ve seen them help my patients,” she says. “The first step is to talk with your oncologist and make a plan together.”