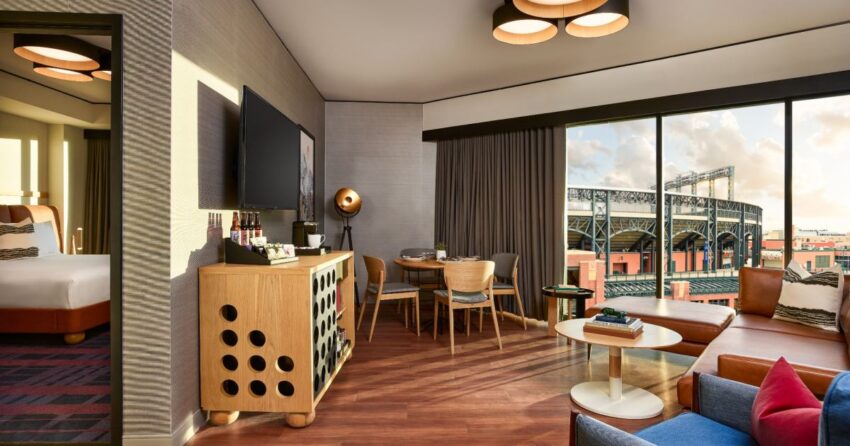 If you’re a die-hard baseball fan, you don’t just go to home games; you travel near and far to support your team. Get inspired by Fever Pitch—not The Bad News Bears—this season and stay in one of the best hotels near baseball stadiums.

Whether it’s location, themed rooms, or some Hall of Fame nostalgia, these properties will make your day- or weekend-long trip to the ballgame an experience that’ll last long after the ninth inning. Behold, the best hotels near baseball stadiums.

Practically a baseball’s throw from Coors Field, The Rally Hotel made its debut in spring 2021 just ahead of the All-Star Game that was hosted in Denver. Subtle design details throughout the hotel are a nod to America’s pastime, from red baseball stitching on leather banquettes to grass green carpet in the hallways that lead to the guest rooms that are numbered in a stadium font—the whole hotel is like a game of sports I-Spy. A Rockies Hall of Fame exhibit is coming soon, but, until then, there’s plenty of team memorabilia in the lobby and a two-story kinetic sculpture by the check-in desk with baseballs moving through the chutes. Before heading to the game, pop into the Rally Bar for mini corndogs you can dunk in honey-mustard and a vodka cocktail made with butterfly pea flower that turns your drink a Rockies shade of purple.

Artwork and baseball relics narrate Cardinal’s history at Live! by Loews — St. Louis, a 216-room hotel that was built on the former site of the 1966 Busch II Stadium. Abstract blueprints of the former stadium adorn headboards in suites while Cardinal-red travel trunks from the team’s use during the Prohibition era glimmer on the walls of Bar Bourbon. The hotel is an anchor of Ballpark Village, a buzzy entertainment district adjacent to Busch Stadium, so the game day excitement is definitely palpable here. We should mention that Live! by Loews is also for whiskey lovers: The Whiskey Room boasts a list of 480 bottles of bourbon, rye, Irish, scotch, and Japanese whiskies in an intimate space.

The hotel’s namesake Zachary Taylor Davis is considered one of the most influential Chicago architects, and he was hired in 1914 to design Weeghman Park, which would later be re-named Wrigley Field. Davis (considered the Frank Lloyd Wright of baseball architects) was one of the first to design ballparks with steel-beam and concrete instead of wood. Guests at Hotel Zachary are spoiled with panoramic views of Wrigleyville and Wrigley Field, and the hotel offers an “Architecture of Baseball” package that comes with an architectural tour of Wrigley Field, which is a National Historic Landmark. Hotel rooms and spaces are imbued with Chicago’s baseball heritage, with ivy-green headboards, pinstripe carpet, historical photographs and rare Wrigley Field memorabilia.

As far as the best hotels near baseball stadiums go, the Hilton Baltimore Inner Harbor offers the ultimate “room with a view” experience. Ten of the hospitality suites here have views of Oriole Park at Camden Yards, including a prized home plate view from the one-bedroom balcony suite where you can step outside of your room to hear the crack of the bat and watch a Baltimore Orioles game. If you can’t snag a suite, though, 74 additional rooms have stellar home plate views and the pool and fitness center look into Oriole Park, too. During baseball season, the hotel runs a Triple Play Package which includes perks like food and beverage credits.

Red Sox fans and out-of-towners alike will have a home-field advantage by staying at Hotel Commonwealth. Not only is Commonwealth the official hotel of the Sox, it’s a stone—rather, a ball’s throw away from Fenway Park. You can choose from an array of packages, some of which include VIP on-the-field access to batting practice, a behind-the-scenes tour of the famed Green Monster and the chance to have personal messages displayed on the scoreboard. The Fenway Park Suite is a dream come true for Red Sox fans, with a walk-out balcony overlooking the beloved ballpark, a real bag of actual Fenway dirt, a baseball glove for catching fly balls, and a coffee table signed by numerous legends.Don’t fret if you’re not a Sox fan. (Odds are if you’re staying in a hotel, you’re not.) Hotel Commonwealth’s Baseball Suite pays homage to baseball titans the likes of Babe Ruth and Jackie Robinson. If you’re thinking this is heaven, just wait ‘til you pop in Angels in the Outfield. The suite has 40+ classic baseball films to kick back and relax to. It’s hard to beat this when browsing the best hotels near baseball stadiums. Can’t get enough of America’s favorite pastime? We can’t blame you. Head to Yankee Stadium or Citi Field to catch a game before high-tailing it upstate for some nostalgia by staying in the historic Otesaga Resort Hotel in Cooperstown, NY. Rumored to be the birthplace of baseball, Cooperstown is like falling into a time warp. The village is home to everything from baseball-themed restaurants, bat companies, and, of course, the National Baseball Hall of Fame, which houses over 40,000 3D items of memorabilia, three million books and documents, and 500,000 photographs. You’ll notice the baseball obsession just about everywhere. Case-in-point: At The Hawkeye Bar & Grill inside the Otesaga Resort, the toothpicks holding your burger together are adorned with mini baseballs on the end. The resort’s double play package includes tickets to the National Baseball Hall of Fame & Museum and a souvenir baseball bat.

Consider The Vinoy Renaissance St. Petersburg Resort & Golf Club “home base” if you’re a traveling fan (aka not rooting for the Tampa Bay Rays). If you stay at the Vinoy, you’ll be 10 short minutes from Tropicana Field, and if you purchase The Vinoy Grand Slam Baseball package, you’ll enjoy accommodations, breakfast, transportation to and from the field for two and a spectator survival kit. You can’t get any closer to Rogers Centre (home of the Blue Jays) than if you stay in the Toronto Marriott City Centre Hotel—the hotel is literally inside the stadium. Guests have even caught baseballs from the windows of their field-view rooms. As the only hotel in North America located within a major league sporting venue, the Marriott has its own mascot, a baseball named Slider who makes cameos on game days. Reserve a window table at the on-site Sportsnet Grill and watch batting practice while enjoying a hot dog and beer. You’ll have to book this suite far in advance because The Hotel Union Square only has one “Dugout Suite.” And it’s pretty spectacular. The walls are orange and the rest of the room is outfitted with Giants décor; plus there’s a gift basket loaded with ballpark treats like Cracker Jack, peanuts and bubble gum. What’s more, the hotel is just a 20-minute walk from the stadium so you can avoid all the traffic.

The Omni San Diego’s seasonal baseball-themed package is hard to pass up with accommodations, breakfast, free parking, two tickets to a Padres game and—wait for it—free apple pie delivered directly to your room. Does it get any more American than that? It doesn’t, but it does get more convenient; the hotel connects to Petco stadium via skywalk.