6 Foods That Could Fix Underlying Cause of Inflammation 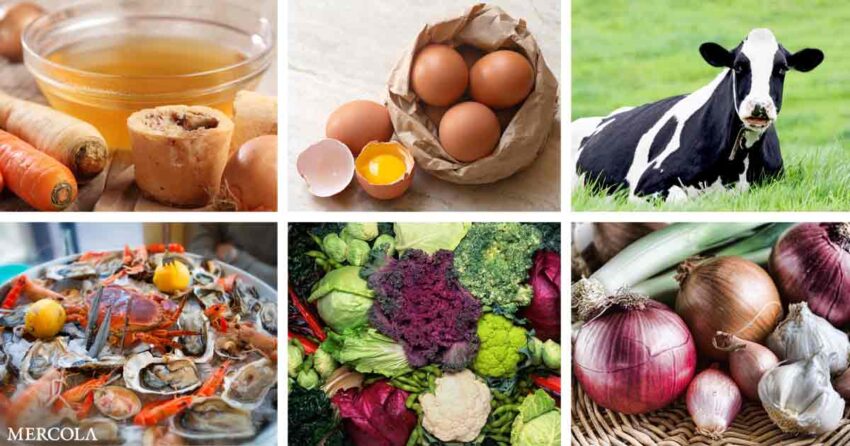 This article was previously published October 14, 2019, and has been updated with new information.

Sulfur is a somewhat “forgotten” nutrient you don’t hear mentioned very often, but it’s very important for optimal body function and health. You get most of your sulfur from certain proteins in your diet, specifically the amino acids methionine, cysteine, cystine, homocysteine, homocystine and taurine.1

Of these, the two most important sources are methionine and cysteine. Methionine is an essential amino acid, which means it cannot be synthesized by your body and must be supplied through your diet. Cysteine is conditionally essential, because it can be synthesized from methionine but not from inorganic forms of sulfur.2

Neither of these primary sulfur-containing amino acids is stored in your body per se, although glutathione is a key storage form for sulfur.3 Glutathione is composed of three amino acids: cysteine, glutamate and glycine, and is your body’s most potent antioxidant.

Glutathione also keeps many other antioxidants performing at peak levels, and cysteine availability is thought to be a rate-limiting factor for glutathione synthesis.4

Frequent use of drugs that require sulfur for excretion and/or detoxification can also contribute to an inadequate sulfur status. Acetaminophen is one such example.9 A vegan diet can also put you at increased risk for sulfur deficiency, because plant-based foods contain fewer sulfur-containing amino acids than animal-based foods.10

The Importance of Sulfur

According to Stephanie Seneff, Ph.D., who has written several papers11,12,13,14 on sulfur and sulfur metabolism and its role in human disease, sulfur plays a role in many biological processes, including metabolism15 and the sulfonation of hormones,16 and deficiency appears to play a role in a wide range of health problems and diseases, including:

Required in the creation of connective tissues such as cartilage, tendons and ligaments, sulfur is also essential for healthy joints, and deficiency has been linked to joint pain and joint-related diseases.18 Other benefits, uses and sources are also noted in the paper “Sulfur in Human Nutrition and Applications in Medicine”:19

“Methylsulfonylmethane (MSM), a volatile component in the sulfur cycle, is another source of sulfur found in the human diet … Organic sulfur, as SAAs [sulfur-containing amino acids], can be used to increase synthesis of S-adenosylmethionine (SAMe), glutathione (GSH), taurine, and N-acetylcysteine (NAC).

MSM may be effective for the treatment of allergy, pain syndromes, athletic injuries, and bladder disorders.

Other sulfur compounds such as SAMe … taurine, glucosamine or chondroitin sulfate, and reduced glutathione may also have clinical applications in the treatment of a number of conditions such as depression, fibromyalgia, arthritis, interstitial cystitis, athletic injuries, congestive heart failure, diabetes, cancer, and AIDS.”

As explained by the featured study above, sulfur is the third most abundant mineral in your body, based on percentage of total body weight.20 Sulfur bonds are required for proteins to maintain their shape, and these bonds determine the biological activity of the proteins.

For example, hair and nails consist of a tough protein called keratin, which is high in sulfur, whereas connective tissue and cartilage contain proteins with flexible sulfur bonds, giving the structure its flexibility.

With age, the flexible tissues in your body tend to lose their elasticity, leading to sagging and wrinkling of skin, stiff muscles and painful joints. A shortage of sulfur likely contributes to these age-related problems.

In addition to bonding proteins, sulfur is also required for the proper structure and biological activity of enzymes. If you don’t have sufficient amounts of sulfur in your body, enzymes cannot function properly.

A cascade of health problems may thus ensue, since your metabolic processes rely on biologically active enzymes. You can learn more about this in “Enzyme Fundamentals.” Sulfur also plays an important role in:

Sulfur is also crucial for healthy liver function and the prevention of liver disease. As noted in one study,27 “a derangement in sulfur amino acid metabolism, possibly located at various steps along the trans-sulfuration pathway” is found even in mild forms of liver disease.

Part of its influence on your liver has to do with its influence over glutathione. As noted in the 2015 paper,28 “Metabolism of Sulfur-Containing Amino Acids in the Liver: A Link Between Hepatic Injury and Recovery”:

“The transsulfuration pathway is connected to the production of glutathione (GSH), which has potent antioxidant capacity in the liver. Accumulating data show that GSH depletion renders the liver vulnerable to oxidative stress and prone to progression of liver disease.”

Another crucial nutrient for liver health and the prevention of chronic liver disease, including nonalcoholic fatty liver disease, is choline,30 detailed in “Choline Is Crucial for Liver Health.”

Methylsulfonylmethane (MSM) is known as a sulfur donor, being 34% elemental sulfur by weight.31 Many of the benefits of MSM supplementation are related to its ability to reduce inflammation, regulate the balance of reactive oxygen species and antioxidant enzymes,32 and modulate your immune response.33

As a supplement, MSM is widely used in the treatment of pain, especially pain associated with arthritic conditions. One clinical trial34 found that people with osteoarthritis of the knee who took 3 grams of MSM twice a day for 12 weeks experienced significantly decreased pain and improved physical function, compared to a placebo.

Another randomized double-blind placebo-controlled study35 found patients with mild to moderate osteoarthritis benefited from oral glucosamine and MSM, both individually and in combination. Here, the treatment groups received 500 milligrams (mg) of glucosamine and/or 500 mg of MSM three times a day for 12 weeks. According to the authors:36

“Glucosamine, MSM and their combination produced an analgesic and anti-inflammatory effect in osteoarthritis. Combination therapy showed better efficacy in reducing pain and swelling and in improving the functional ability of joints than the individual agents.

In 2011, I interviewed Seneff about the influence of sulfur on health and disease. I’ve included that interview above for your convenience. In it, Seneff discusses the crucial connections between sulfur, cholesterol and vitamin D.

Her research suggests heart disease may actually be related to cholesterol sulfate deficiency, and in the interview, she explains how elevated LDL (low-density lipoprotein) cholesterol is a sign of this deficiency.

Seneff also explains why lowering LDL with statins can lead to heart failure. Essentially, by elevating LDL, your body is protecting itself from the harmful effects of cholesterol sulfate deficiency. When you simply remove the LDL, you remove this “backup” mechanism aimed at keeping your heart going strong. As a result, heart failure becomes a distinct possibility.

That said, high LDL is correlated with cardiovascular disease, so the question then becomes: How can your body produce cholesterol sulfate without having to create harmful LDL?

Under normal, healthy conditions, your skin synthesizes both cholesterol sulfate and vitamin D3 sulfate when exposed to sunlight. These two sulfated sterols are water soluble and can travel freely in your bloodstream.

In essence, sensible sun exposure may be an important part of heart and cardiovascular health. In fact, studies have shown that those who live in countries with abundant sunlight have a lower risk to heart disease. Vitamin D3 supplements, on the other hand, are unsulfated. This is a significant drawback, as the unsulfated form needs LDL as a vehicle of transport.

Either drink the broth regularly, or use it for soups and stews. Connective tissues are sulfur-rich, and when you slow-cook the bones, you dissolve these nutrients out of the bone and into the water.

If you have poor tolerance for foods high in sulfur, it may be an indication of an overgrowth of sulfur-reducing bacteria in your gut. These bacteria, such as Desulfovibrio and Bilophila wadsworthia, produce hydrogen sulfide gas from sulfur-based food sources, which can destroy the gut lining and cause gastrointestinal discomfort.

A defect in the enzyme that oxidizes sulfur to sulfate, called sulfite oxidase, will lead to an overgrowth of these sulfur-reducing bacteria, and toxic chemical exposures may disrupt sulfite oxidase.

Furthermore, these bacteria also convert mercury to a toxic organic form called methyl mercury. When sulfite oxidase is deficient, mercury cannot be converted to mercury sulfate, which is the nontoxic form of mercury that can be excreted by the body. Thus, disruption of sulfite oxidase results in impaired sulfation capacity and increased mercury toxicity.

Other food additives such as food dyes can also exacerbate problems in your phenol sulfur-transferase (PST) sulfation pathway by suppressing PST enzyme activity. Sulfation is a critical step in detoxification of toxic phenols.

To address this situation, it’s recommended you initially go on a low-sulfur diet and reduce your toxic exposure by eating organic and avoiding household toxins of all kinds.

As your toxicity level is reduced, you can start adding sulfur-rich foods back into your diet, one at a time. Next, it’s important to enhance your body’s detoxification process by supplying more sulfate, either through diet or supplementation.

How to Boost Your Sulfur Intake — Diet and Supplementation

Aside from sulfur-rich foods, sulfur can also be obtained through supplementation with MSM. You can learn more about MSM in my interview with Rod Benjamin.

Benjamin is the director of technical development for Bergstrom Nutrition, the largest producer of the highest quality MSM produced by distillation purification. In his interview, we discuss suggested dosages and how to identify a high-quality supplement.

Another excellent source of sulfur is taking regular Epsom salt baths. Epsom salt (magnesium sulfate) is made up of magnesium, sulfur and oxygen. While most of the benefits associated with Epsom salt baths relates to magnesium39 — such as improved sleep, stress reduction and reduced pain and muscle cramping — its sulfur content is also important for health.

Epsom salt baths are often preferable if you’re toxic, as the sulfur in Epsom salt is readily available to your body without having to be converted. As a general recommendation, use 1 to 2 cups of Epsom salt to a tub of water. The warmer the water, the more of the salt that will be dissolved, and the more your body will be able to absorb as the heat opens your pores.

If you experience a negative reaction, such as irritability or hyperactivity, decrease the amount used and incrementally increase the amount based on your tolerance. Alternatively, use 1 part Epsom salt to 2 parts water for a foot bath. Soak your feet for about 30 minutes.

Toxicity data shows MSM is extremely safe and can be taken at high doses. As noted in the journal Nutrients, “As a Generally Recognized As Safe (GRAS) approved substance, MSM is well-tolerated by most individuals at dosages of up to 4 grams daily,”40 although toxicity studies have reported no observed adverse effects up to a level of 5 grams per kilo per day.41

That said, potential side effects at higher doses include intestinal discomfort, ankle swelling and skin rashes. These are likely detoxifying effects that can typically be mitigated or minimized by cutting back on the initial dosage and slowly working your way up.