Pediatricians Who Serve Trans Youth Face Increasing Harassment. Lifesaving Care Could Be on the Line

Dr. Gina Sequeira first saw the protesters on a bright clear morning last September. A co-director of Seattle Children’s Gender Clinic who provides gender-affirming care to young people, Sequeira had confronted ignorance about her medical specialty in the past. But nothing had prepared her to see people outside her office, waving signs and handing out flyers warning of the “dangers” of the work she does.

“That was really, really hard for us as a clinic,” she says. “And I think it was really hard for the hospital’s patients and families who witnessed it.” Just a month later, protesters showed up again.
[time-brightcove not-tgx=”true”]

Hers wasn’t the only clinic having a hard time in 2021. The LGBTQ advocacy group Human Rights Campaign has calculated that, last year, conservative lawmakers introduced over 130 anti-trans bills into state legislatures—including 35 that explicitly limited the ability of trans and gender-expansive youth to access gender-affirming care, a term that refers to holistic psychological and medical care that affirms a person’s gender identity. As of Feb. 11, the ACLU has tracked similar bills in at least 17 state legislatures this year.

Only a small group of pediatricians provide such care in the U.S., and, in this political context, those who do are often finding themselves at the receiving end of growing harassment—even as research confirms the potentially life-saving nature of the work they do. Demonstrators have organized protests like the ones at Sequeira’s clinic at other sites across the country; in Ohio, billboards have been rented spreading disinformation about affirming care—including one near a children’s hospital. Pediatricians tell TIME they have received threatening mail, have been impersonated online and have feared for their safety. And they worry such harassment campaigns could have a devastating impact on the ability of young people to access crucial medical care.

Roughly a month before the September protest, Sequeira had received an unmarked letter in the mail that gave her pause. She’d worried about the risk of anthrax, she tells TIME; of someone trying to hurt her. Eventually she gingerly opened the envelope. Inside, she found printed posters decrying gender-affirming care for children. “No child is born in the wrong body!” one read. “Who profits from this crime?”

“I was taken aback, and really kind of fearful,” Sequeira recalls. She’d seen colleagues who provided abortion receive similar abuse. But she never thought her work could become nearly as controversial. “It really made me wonder what the future of our work looks like,” she says. “Is that the path we’re going down?” 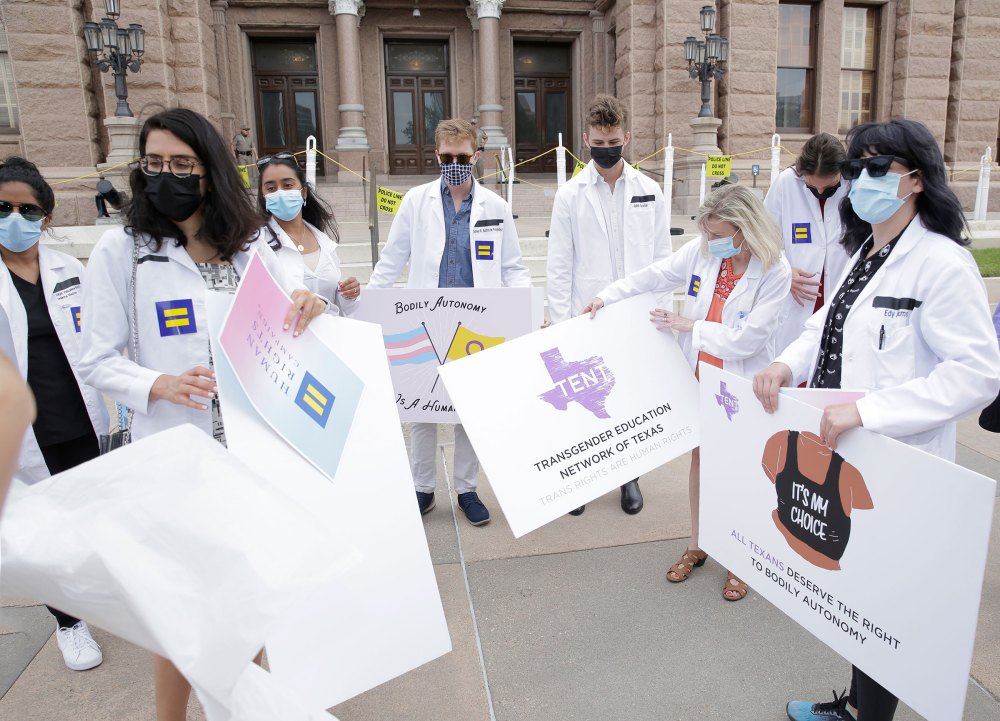 Erich Schlegel—Human Rights Campaign/APMedical professionals speak out against legislation that would ban the gender-affirming medical care recommended by every major medical association, at a rally at the Texas State Capitol in Austin on May 4, 2021.

Gender-affirming care can support youth experiencing gender dysphoria, which is often described as the discomfort or distress that might occur when a person’s gender identity is inconsistent with the sex they were assigned at birth, per the Mayo Clinic. In gender-affirming care models, according to the American Academy of Pediatrics (AAP), “pediatric providers offer developmentally appropriate care that is oriented toward understanding and appreciating the youth’s gender experience.” That includes conveying the message that variations in gender identity and expression are a normal aspect of human diversity, and that, if a mental health issue does exist, it “most often stems from stigma and negative experiences rather than being intrinsic to the child.”

In young children, gender dysphoria can be treated with non-medical social and behavioral interventions, which can include allowing a child to present themselves in alignment with their gender identity by changing the way they dress, for example, or changing their given name and pronouns, explains Dr. Morissa Ladinsky, a pediatrician at the University of Alabama at Birmingham who specializes in affirming care.

After puberty has begun, a child experiencing gender dysphoria may also begin receiving gonadotropin-releasing hormone (GnRH) analogues—known by the term “puberty blockers.” They are “simply a pause button,” says Ladinsky, to stop the continued development of a puberty incongruent with a child’s gender identity. Used at this stage, blockers are reversible, says Ladinsky, and have been used safely for over 30 years in other pediatric conditions like central precocious puberty, which causes children to enter the developmental stage too early. Puberty blockers can help “reduce distress that may occur with the development of secondary sexual characteristics” and reduce the need for surgery in the future by holding off physical changes like an Adams apple or breast growth, according to the AAP.

When they get older, some adolescents will begin taking gender-affirming hormones, such as testosterone or estradiol. While there is some debate within the medical community on when any given young person should start hormones, the intervention has proven pivotal to the treatment of dysphoria in many adolescents. It is rare for a person under 18 to undergo any type of surgical intervention, but some may decide to pursue “top surgery”—reconstructive surgery to change the appearance of one’s chest—while they are still teenagers.

An emerging body of research has found that affirming care models can result in young people having fewer mental health concerns. As with all medical care, treatment decisions are nuanced, and, because of the age of the patients, are driven by conversations between the young person, their family and their doctor. Trans and gender expansive children cannot receive affirming medical treatment without their parent’s or guardian’s consent in the U.S. healthcare system.

Yet much of the criticism surrounding gender-affirming care operates from the misperception that young children are receiving rushed, unsupervised, irreversible treatments. In violent, visceral terms, best-selling authors, right-wing commentators, conservative social-media stars, and other influential figures have made such arguments, stirring a moral panic that has grown in recent years. The Williams Institute at UCLA estimated in April 2021 that 45,100 trans youth were at risk of losing medical care if all the bills then under consideration that intended to restrict or ban gender-affirming care were implemented into law. In the same month, Arkansas went so far as to ban pediatricians from not only providing gender-affirming care, but even providing a referral to patients. (The law is currently blocked by a federal judge.) In August, Texas Gov. Greg Abbott suggested that providing affirming care to adolescents equates to child abuse.

Mis- and disinformation about trans people has also gained airtime in conservative media, especially online. A Nov. 9 report from Media Matters found that 77% of the top-performing trans-related Facebook posts between Oct. 2020 and Sept. 2021 were on right-leaning pages, as were nearly two-thirds of all the interactions on posts about trans issues.

“There’s nothing grassroots about this at all,” argues Imara Jones, journalist and founder of TransLash Media, whose podcast the Anti-Trans Hate Machine has documented the rapid rise of anti-trans legislation in recent years. “This is a highly organized movement that is targeting trans people and trans rights.”’

Jones traces the proliferation of anti-trans bills to an umbrella organization of over 60 right-wing groups called Promise to America’s Children, which lists on its website “leading national partners” including Family Policy Alliance (the lobbying arm of longtime anti-LGBTQ group Focus on the Family), Alliance Defending Freedom (which the Southern Poverty Law Center has defined as an anti-LGBTQ hate group), and conservative think tank The Heritage Foundation. She adds that the anti-LGBTQ group Family Research Council has actively promoted anti-trans bills.

Promise to America’s Children’s website includes model legislation for policymakers titled the “Protecting Children from Experimentation Act,” which aims to criminalize gender-affirming treatment for young people. A version of the bill was introduced in Congress in 2021, though it did not advance.

This focus on gender-affirming pediatricians has extended beyond legislation. As disinformation and fearmongering about trans youth has surged, TIME has spoken with numerous providers who say they’ve witnessed a rise in harassment in the past two years—whether via in-person protests, online threats and cyberbullying, menacing mail, attempts to cut their research’s funding or even their medical licenses. Other gender-affirming pediatricians with whom TIME spoke refused entirely to go on the record, citing fears about the risk of violence against them and their families. 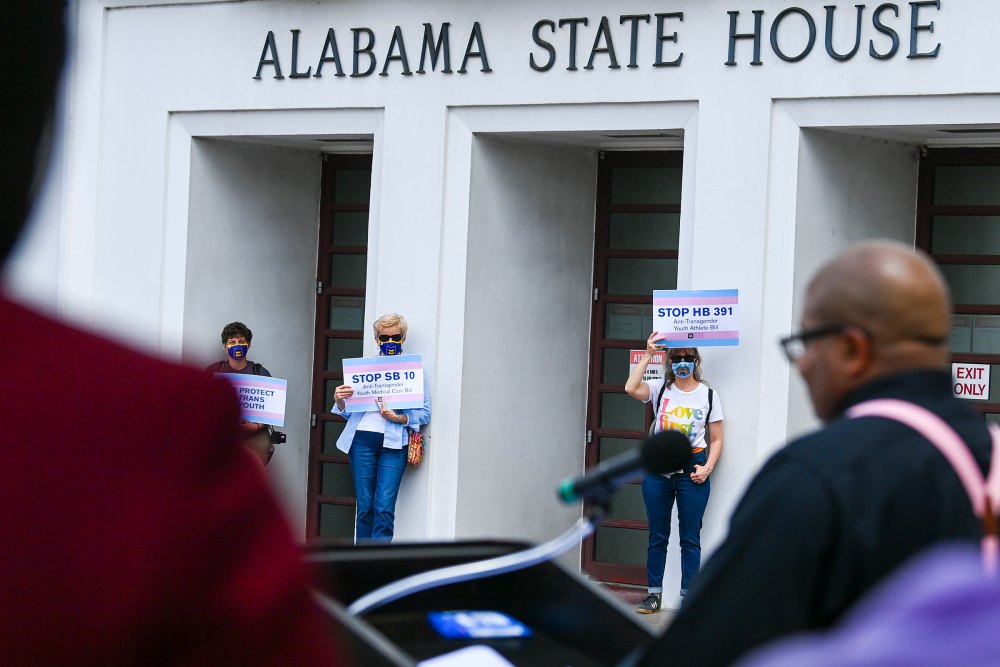 Julie Bennett—Getty ImagesOpponents of several bills targeting transgender youth attend a rally at the Alabama State House in Montgomery to draw attention to anti-transgender legislation introduced in Alabama on March 30, 2021.

The first known protest of gender-affirming pediatricians was in December 2020, per research by Health Liberation Now (HLN), a trans-run advocacy website that researches political impacts on trans health. But by February of 2021, anti-trans groups had announced plans to protest in Los Angeles; Chicago; Philadelphia; Dallas; Hartford, Conn.; and Ontario, Canada. Through the summer and fall of 2021, protests became a more regular occurrence. Some anti-trans groups have begun using an online interactive map that tracks the location of clinics providing gender-affirming care, per HLN’s research. Other forms of harassment stay online, but pediatricians say they are similarly frightening—and have been going on since even before the first documented in-person protest.

When Susan, a pediatric endocrinologist, got the call from her hospital’s administrative assistant in the fall of 2020, it felt like she’d been punched. (TIME is withholding Susan’s identity and that of one other provider out of concerns for their safety.) A patient’s family had contacted the hospital, the assistant said, flagging that they’d seen posts online..