One California University Has Unified Town and Gown to Fight Covid. Why Haven’t Others?

Once a week, Lori Janich drives down the street from her office and partakes in an ongoing success story. Phone in hand to confirm her appointment, she strolls into the massive Activities and Recreation Center on the University of California-Davis campus, reaches a covid-19 testing station, swirls water in her mouth, spits into a tube, and leaves. Within a day, she receives her test result.

Janich doesn’t live in Davis, but because her job as a licensed dental hygienist brings her there, everything about the covid testing process is free for her. The same goes for all UC-Davis students, faculty members, and staffers; Davis city residents; local workers; and visitors — almost anyone whose life brings them into town. Davis has a population of about 70,000, with an additional 15,000 people living on campus, yet through a joint city-university effort, it has administered more than 740,000 tests.

“It’s always worked out for me,” Janich said. “I strongly recommend it to anyone qualified to use it.”

More than a year and a half in, this experiment — a cooperative project placing a university and its adjoining city inside a single, coordinated health bubble ­— has delivered superior results. Both town and gown have consistently experienced covid infection and test positivity rates markedly lower than those recorded in the surrounding region and statewide, according to reviews of state and local data.

The program, Healthy Davis Together, includes free saliva-based testing, vaccination, masks, and isolation or quarantine housing if needed. As part of the effort, UC researchers are regularly testing city wastewater for signs of SARS-CoV-2, the virus that causes covid, and workers from the program routinely screen children in the local school district. A 200-plus army of UC-Davis undergraduate “health ambassadors” raise awareness in the community, with help from a public relations firm. Even during the omicron surge, the program ramped up in time to prevent runaway infection rates.

So why haven’t lots of other campus-town combinations tried it?

“Initially, I thought, ‘Of course, other people are going to do this,’ but it turns out — at least to our knowledge — that there’s not another community in the country that did,” said Brad Pollock, chair of Public Health Sciences at UC-Davis and the program’s leader. Numerous campuses contacted by KHN, in California and outside the state, had no comment about the Davis program.

“Is this model exportable, or is there something so unique about Davis? I think the answer is ‘yes’ and ‘yes,’” Pollock said. 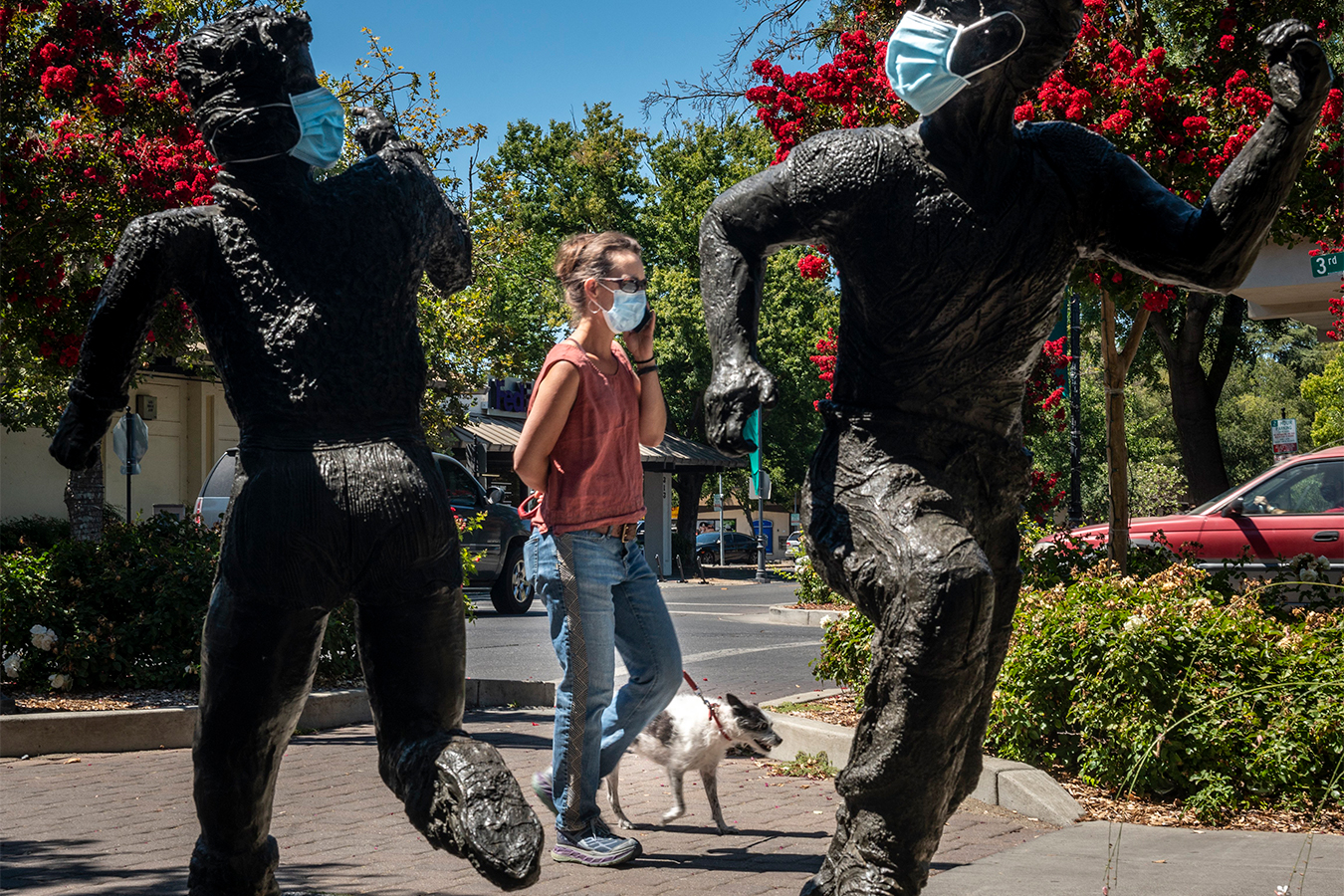 From the project’s inception, UC-Davis researchers and administrators have aimed to learn what happens when a university stops trying to seal itself off from the community in which it’s embedded and instead extends its health goals to that entire community.

“There is strong data that while universities are somewhat different epidemiologically than their communities, they are intertwined,” said Dr. Sarah Van Orman, who directs student health at the University of Southern California and is past president of the American College Health Association. “There are many other college towns where the university is central to community life and this type of closed bubble makes sense.”

UC-Davis researchers say the model has worked. Davis’ cumulative covid infection rate is lower than all but a handful of California’s 58 counties and is roughly half the statewide average. (Researchers are still compiling figures for hospitalizations.) In January 2021, when California was experiencing a 17% test positivity rate for covid, Davis’ weekly average came in just above 1%, according to data provided by Healthy Davis Together. And this past January, as omicron pushed state positivity rates above 20%, Davis’ weekly average never got above 5%.

“When this all began, we were told that Davis would be one of the unhealthiest cities to be in, because our students come from all over the country and all over the world,” Pollock said. “Instead, we’re one of the healthiest.”

Despite the program’s success, KHN was hard-pressed to find any similar community — a small U.S. city chiefly identified by its association with a college or university — that has followed suit.

In some cases, the roadblocks may be administrative; in others, political. Certainly, the cost of such a wide-scale program can be prohibitive. UC-Davis officials estimate that it will wind up spending $40 million to $50 million, and the city expects to have contributed $1.5 million by the program’s anticipated end in June.

“The Davis experience is a real outlier,” said John Packham, associate dean at the University of Nevada-Reno School of Medicine, who works on statewide health initiatives. “I’m not aware of any place in the U.S. that has that combination of positive factors: plenty of dollars, fidelity to evidence and science-based public health practice, social solidarity, isolation, and public/private commitment.”

The project began in summer 2020 as covid case rates began to take off. Dr. Tom Nesbitt, a senior official at UC Davis Health system, suggested to Pollock that a university-city cooperative might be possible, and Pollock sketched an outline during a weekend at his home in Sacramento. “The scheme was just a big circle with Davis in the middle, and on the periphery were all these things we’d need to do,” Pollock said.

An effective testing system was paramount, and it was delivered by Richard Michelmore, a university plant geneticist who repurposed a $400,000 machine set up to detect DNA variations in crop plants like lettuce. Michelmore engineered it to process large numbers of saliva-based covid tests instead, and it has cranked out as many as 10,000 tests a day.

The university covered costs with philanthropic donations; money from the federal Coronavirus Aid, Relief, and Economic Security Act; and state and federal grants. But it has gained the money back in other ways, Pollock said. “We were losing a lot of money by students not being on campus,” Pollock said. “We lost housing revenue immediately.”

Pollock and his associates are doing modeling to assess the savings in lives, hospitalizations, and economic activity. Davis has had slightly more than 7,900 covid cases since the pandemic began, with 26 deaths. “I think the results [of the program] are very robust,” Pollock said.

The city’s willingness to partner with the university is central to those results. When university officials approached Davis City Manager Mike Webb with the idea of trying to safeguard both entities within a single program, “my immediate response was, ‘We’re in,’” Webb said. “We all knew it was critical.”

The city had no budget for the project, so its initial contribution was in kind: It supplied city staff hours, opened city buildings as testing venues, and deployed its communications specialists to help spread the word. In January, city leaders approved $750,000 in American Rescue Plan Act money to keep the program going, and Webb asked for another $750,000 to see it through to the end of this school year.

Across the country, the relationship between campus and city or town is often strained. Davis’ own history is fractious, with previous university administrations sparring with city leaders over issues like providing adequate housing for the rapidly growing student population. But Gary May’s arrival in 2017 as UC-Davis chancellor has led to more cooperation and coordination, according to several city administrators and local businesses leaders. 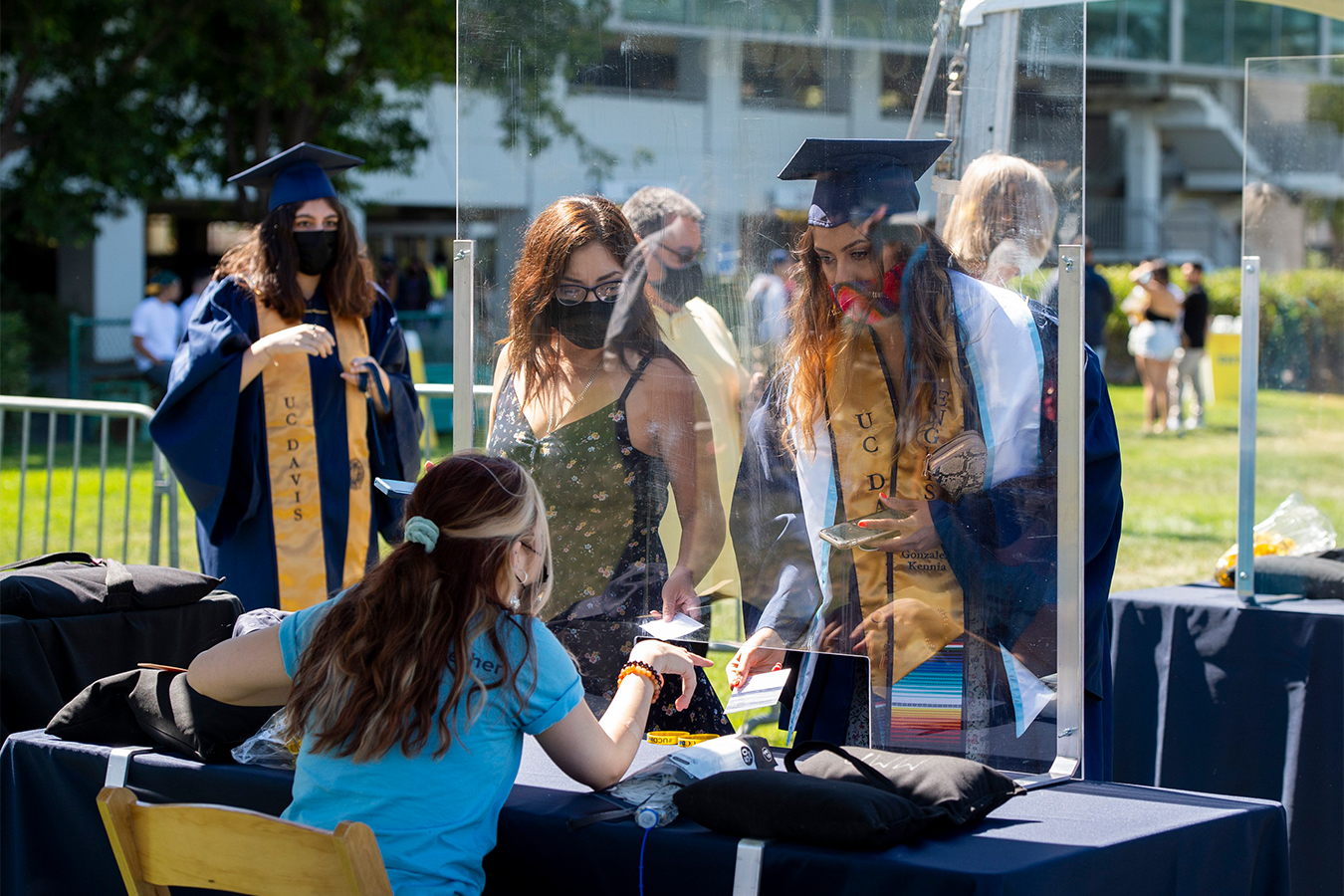 The results are visible. On a warm February afternoon, the Davis campus was abuzz with activity. Matthew Nissan, a sophomore math major who is up to date on his vaccinations, said he takes a covid test at the Activities and Recreation Center once every two weeks, as required by the school. Unvaccinated students and employees, who account for 2% of the campus population, must be tested at least every four days.

“No problem doing it,” Nissan said. “I spent my freshman year in remote learning. When I finally got to campus last fall, it was like, ‘OK, this is college.’”

Around town, meanwhile, the project is hard to miss. Signs posted on almost every block remind residents to get tested and observe masking rules. People who live in the city receive regular updates about testing hours and sites. The project has expanded to include the rest of Yolo County, with testing and vaccination outreach to agricultural workers in the region’s rural stretches.

Pollock said he and his team are capturing all the information they can and sharing their experiences with colleagues on other campuses, pending publication of their work in a peer-reviewed journal. Although the Davis model appears to be rare, experts said, it may yet spread.