NFL Draft 2022: 11 Predictions and Questions for Every Position Group 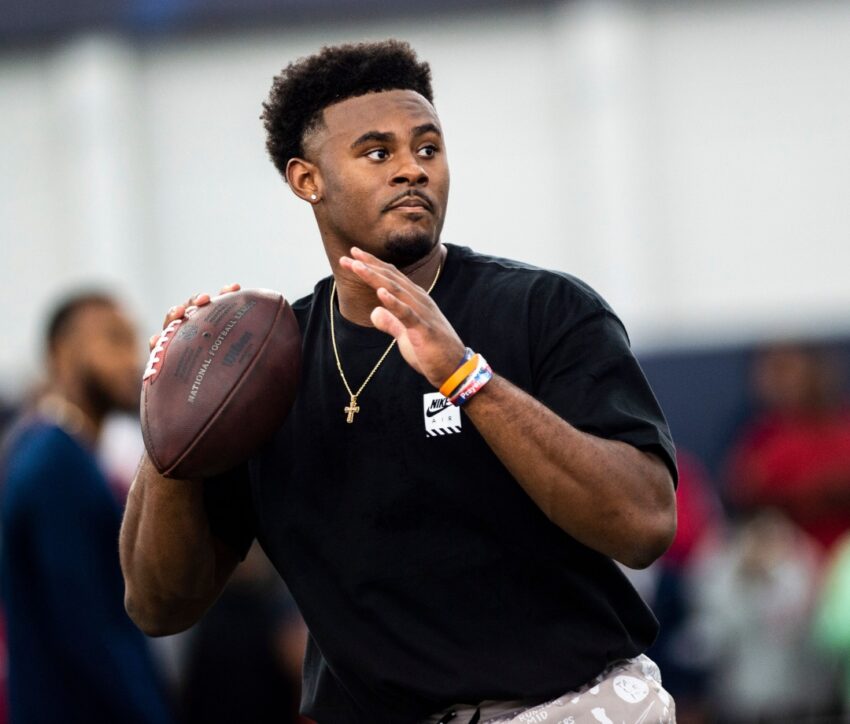 The NFL Draft 2022 starts with the first round on Thursday, April 28, continues with two more rounds the following night, and wraps with the last four rounds on Saturday, April 30. That much is certain, as is the fact that it will be broadcast on ESPN and take place in Las Vegas, where the league now has a franchise and a whole bunch of gambling partners.

Beyond those details, things get murkier. Every NFL Draft is subject to a lot of guesswork, but that’s especially true in 2022. There is no consensus best quarterback and therefore no consensus No. 1 overall pick. It’s likely that this will be the first year since 2017, when the Browns took defensive end Myles Garrett, in which a QB isn’t the first player off the board. The lack of QB certainty means a broader lack of clarity around the draft, as it’s not clear which teams are most smitten with which players and who might pull off an audacious trade in order to draft a key prospect.

In that spirit, here’s one big question around every position group in the draft. The answers to these questions will go a long way toward deciding how the 2022 NFL Draft unfolds for the league’s 32 teams.

Malik Willis Kendall Warner/AP / Shutterstock1. Quarterback: Is someone going to bet the franchise on a big trade up to draft a QB?

The longer answer: Probably, but it’s not clear which team will do it, or which quarterback they’ll go after. This draft has five quarterbacks who could plausibly be first-round picks. Most analysts have either Pitt’s Kenny Pickett or Liberty’s Malik Willis as the first one to go, and Willis has been the subject of some speculation that teams might jockey to take him early on. The Panthers have a lousy QB situation and pick sixth, and could perhaps get Willis by standing pat. The Seahawks (who just traded Russell Wilson) pick ninth and might do the same. The Steelers (who just saw Ben Roethlisberger retire after fading late in his career) would probably need to trade up.

Any team that trades up in the first round to get a quarterback will be making a franchise-altering investment. It will cost a lot in draft picks, probably, as well as signal that the team is ready to put multiple years into making that player the cornerstone of their team. It’s one of the few things in the NFL that a team really cannot afford to get wrong.

There’s a school of thought in football that insists running backs are increasingly irrelevant in the modern game. The reason? Football has become more passing-oriented, and ball-carriers are products of context (like the caliber of their offensive lines) rather than game-changers in their own right.

It’s an overly simplistic way of viewing the sport, but it does track with how NFL teams seem to view the NFL Draft nowadays. Only one or two running backs become first-rounders each year, and the position has similarly suffered in free agency over the years.

The media consensus is that only one running back, Iowa State’s Breece Hall, has a chance to slip into the first round in 2022. Hall was awesome in Ames, and I’d like to see an NFL team spend an early pick on his power and speed. I’m not sure if any actually will, however.

I hope not. Williams was the most dominant receiver in college football last year until he tore an ACL in the national championship game between his Alabama Crimson Tide and the Georgia Bulldogs. In an illustration of his value, Williams’ absence torpedoed the Bama passing game. He had more than 1,500 yards and 15 touchdowns before that, and his over-the-top speed was a problem that defenses in the SEC, the country’s best conference, could not solve.

Williams is reportedly doing well in his recovery. Given his obvious game-breaking ability, it would be pretty silly if he fell to even the bottom of the first round. Williams transferred to Alabama from Ohio State, where he had been teammates with fellow first-round wideout candidates Garrett Wilson and Chris Olave.

4. Tight End: Is the league going to generally ignore tight ends in this draft?

It seems unlikely that one will get picked in the first round, and it could even take until well into the second before a team plucks a tight end. Colorado State’s Trey McBride seems like the consensus No. 1 option, but it’s not hard to find people who prefer Ohio State’s Jeremy Ruckert or Coastal Carolina’s Isaiah Likely. On the other hand, maybe a team will see one of these players as a value opportunity and they’ll become a star rookie, like last year’s Steelers second-rounder Pat Freiermuth did.

Ikem Ekwonu Karl B DeBlaker/AP / Shutterstock5. Offensive Line: Will this be the best offensive tackle draft ever?

Neal and Ekwonu have both received a bit of No. 1 overall pick buzz; Neal showed up first overall in some mock drafts. The league’s shift toward aerial offense has put a premium on both edge rushers and giant men who can block them, and Neal, Ekwonu, and Cross are part of that answer. Northern Iowa’s Trevor Penning and Central Michigan’s Bernhard Raimann could also hear their names called before the first round is up. In fact, Penning probably will.

NFL Free Agents: The Most Important New Signings of the 2022 Offseason Read article

6. Defensive Line: How does the NFL see Georgia’s Jordan Davis?

It looks likely that Davis will be a first-round pick. He is an interesting case, though, because there’s an argument for picking Davis in the top five and another that he could fall a long way down in the first round and maybe even push the second, though that probably won’t happen.

Davis is about 6’6” and 340 pounds. He is a massive man even by the standards of NFL defensive linemen. At Georgia, he often mimicked a one-man wrecking crew. He’s big enough to plug gaps on either side of the center at once and fast enough to chase down much smaller players in wide open spaces. When he’s playing well, he’s a marvel to watch.

But the NFL’s shift toward spread offense isn’t ideal for his draft value. It’s now common for teams to line up on third downs with just two down linemen as edge rushers, three or four linebackers, and five or six defensive backs, leaving no place for a player like Davis. Georgia frequently took him off the field on third downs, and his size has raised some conditioning and durability questions among the draft intelligentsia. That said, Davis has tested through the roof athletically and done nothing to suggest he’s not an all-around great NFL prospect.

I’m not only interested to see who picks Davis and when. I’m interested in how he’ll be deployed in the current iteration of the NFL—and if he’s good enough to buck a trend. I don’t think any positional battle in the 2022 NFL Draft has generated as many passionate takes as the one over whether Michigan’s Aidan Hutchinson and Oregon’s Kayvon Thibodeaux will be the first edge rusher picked. On top of that, one of them could quite possibly be the first player picked. In recent months, Georgia’s Travon Walker, a dominant force in the Bulldogs’ run to a national championship, has also worked his way into this discussion.

Hutchinson lacks the straight-ahead speed of Walker and Thibodeaux, but he has incredible short-area agility, which is more important for getting around offensive tackles. Walker is hilariously fast for a 275-pound guy, but Georgia didn’t use him as a conventional edge rusher and thus denied him the chance to pile up a lot of sacks in his college career. Thibodeaux has seemed destined for the top of this draft since he was a high school senior in 2018, but his production at Oregon was more “great” than “absolutely incredible, first-overall-pick level.” The choice between them is a tough one, and it likely comes down to personal preference.

Nakobe Dean Phelan M Ebenhack/AP / Shutterstock8. Linebacker: What does the NFL have in mind for Nakobe Dean?

Another Georgia product, another elite player whose future role in the NFL is up for some debate. Dean is similar to recent first-rounders like Isaiah Simmons and Zaven Collins; he’s a college linebacker who was good at so many things and was asked to do so much that an NFL team will need to figure out what to hone in on. It’s a good problem to have, and I think any defensive coordinator who can’t figure out what to do with Dean should find a new line of work. Even so, he’s not big (5’11’’ and 229 pounds) and it’s hard to pin down how he’ll fare in the draft.

9. Cornerback: Will this draft be as cornerback-heavy as it looks?

Cincinnati’s Ahmad Gardner, LSU’s Derek Stingley Jr., Washington’s Trent McDuffie, Clemson’s Andrew Booth, and Florida’s Kaiir Elam are all frequently mocked up as first-round picks. Auburn’s Roger McCreary sometimes shows up in analysts’ first rounds, too. That would be a ton of first-round corners—at least five, maybe six—in this NFL Draft, but it would fit with something we’ve already talked about here: This is a passing league, and teams need a loaded pass defense

10. Safety: Does the NFL care that Kyle Hamilton is slow in tights?

He’s not slow in pads. The Notre Dame safety is probably the surest bet for the first player taken at his position. He had a brilliant career in South Bend, has an immaculate frame (6’4” and 220 pounds), plays the ball with controlled aggression, and covers ground quickly. That’s a lot to love, and Hamilton will be an early first-round pick in the 2022 NFL Draft.

But he posted a 4.59-second 40-yard dash time at the NFL Scouting Combine, and that might cause him to fall out of the top five or 10 picks. I find this silly; there’s plenty of game tape that shows Hamilton moves like the wind when it counts. But NFL teams have their own preferences, and it’s possible that some of them will get scared away. Matt Araiza Steve Luciano/AP / Shutterstock11. Special Teams: How soon is too soon to pick a punter?

San Diego State’s Matt Araiza, who just finished an utterly historic season, would like to know. The most powerful punter in college football history is bringing his skill to the NFL. No team has picked a punter before the fourth round since 2012. Araiza probably won’t go that high, but could a team spring for him in the fourth or fifth round? Well, I would.