How to Do the Barbell Hip Thrust: Form, Mistakes & Alternatives

When it comes to building strong, powerful glutes, few exercises are as effective as the hip thrust.

It’s a simple exercise, too, only requiring a bench, a barbell, and (ideally) a bar pad. It’s also easy to learn and perform, but to get the most out of this exercise, you have to avoid a few common hip thrust form mistakes.

What Is the Hip Thrust Exercise?

The hip thrust is a lower-body exercise that primarily trains the glutes.

You can do the hip thrust using your body weight, but most people need to add external resistance using a barbell, dumbbell, or resistance bands to significantly grow their glutes. There are also a few hip thrust machines that allow you to comfortably and effectively train your glutes, too.

There are many variations of weighted hip thrusts, but the most common (and the one we’ll focus on in this article) is the barbell hip thrust.

As you’ll see in a moment, the barbell hip thrust also allows you to use the heaviest weights, doesn’t require any special equipment, and is generally the most effective of all of the hip thrust variations.

Many people confuse the glute bridge and the hip thrust or think they’re basically interchangeable.

While these two exercises are alike in that they both involve extending your hips (increasing the distance between your thighs and belly), there are some important differences.

The glute bridge is performed while lying on the floor, which makes it easy to perform anywhere but also difficult to add resistance to. As a result, it’s usually performed with body weight alone, which means it’s harder to achieve progressive overload with this exercise than the barbell hip thrust.

Thus, assuming you have access to a bench and barbell, you’ll build your glutes faster with barbell hip thrusts than with bodyweight glute bridges.

The main muscles worked in the hip thrust are the . . .

Here’s how those muscles look on your body: 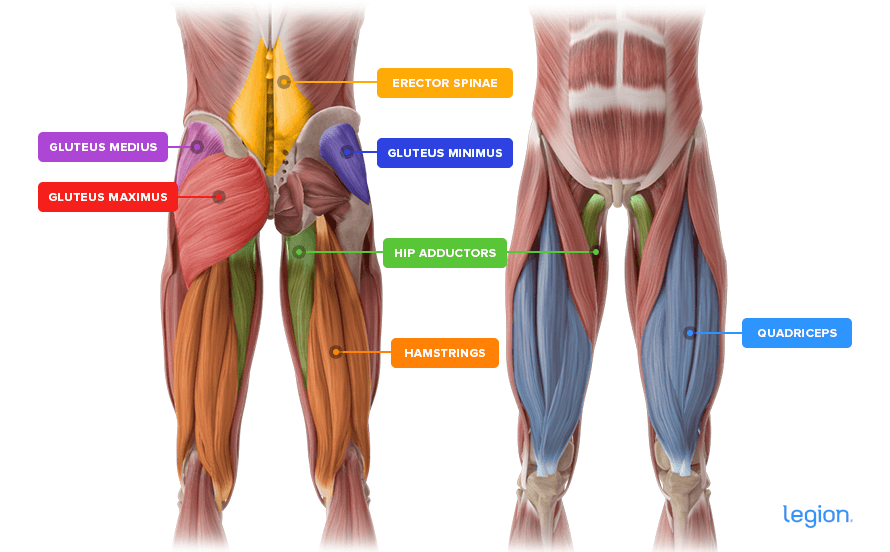 The best way to learn how to hip thrust is to break the exercise up into three parts: set up, thrust, and descend.

Sit on the floor with your back resting against a bench. The bench should be perpendicular to your body and your shoulders should be resting on the middle of the bench.

Roll a loaded barbell over your thighs so that it sits in your hip crease—the point where your thighs meet your torso. Place a hip thrust pad, barbell pad, or folded yoga mat between the bar and your hip bones to prevent bruising and make the exercise more comfortable.

Plant your feet on the floor about shoulder-width apart and 12-to-18 inches from your butt with your toes pointing slightly outward so that your knees are bent to about 90 degrees.

Grab the bar with your palms facing toward the floor and a few inches from your sides (you can experiment with different hand positions to find what’s most comfortable for you).

While keeping your shoulders pressed against the bench and your fingers gripped around the bar, push the bar upward with your hips by pressing through your heels.

As you thrust upward, tuck your chin to your chest. This prevents you from overarching your back and straining your neck.

Continue thrusting your hips into the bar until your torso and thighs form a straight line that’s parallel to the floor and your shins are vertical.

Reverse the movement to return the bar to its starting position on the floor. This is a mirror image of what you did during the thrust. Lower the bar quickly but under control, and once it touches the floor, begin the next rep.

The problem: You don’t set up correctly which makes the exercise awkward and reduces how much you can lift.

The fix: It’s important that you learn how to set up the hip thrust correctly using the guide above and then use the same set-up every time you perform the exercise. The most common set-up mistakes include placing your feet too close or too far away from your butt, not ensuring your shoulders are lying securely on the bench, and forgetting to use a hip thrust pad (or folded yoga mat).

2. Bouncing the weights off the floor.

The problem: You don’t control the descent and the weights bounce off the floor, which either makes the exercise easier (thus decreasing its effectiveness), or throws you off balance and makes it difficult to control the barbell.

The fix: Don’t try to lower the weights slowly or quietly but do it with control. The descent should take less than a second, but you shouldn’t drop your butt to the ground, either. Think “fast but controlled.”

3. Not fully extending the hips.

The problem: At the top of each rep you don’t fully extend your hips, which means you don’t train your glutes through a full range of motion, decreasing the effectiveness of the exercise.

The fix: During each rep, don’t stop thrusting the bar toward the ceiling until your torso and thighs form a straight line that’s parallel to the floor and your shins are vertical. To make sure you fully extend your hips, pause at the top of each rep and take a second to ensure the bar is at about the same height as your knees, then descend.

To perform the B-stance hip thrust, set up as you would for the barbell hip thrust, then move your right foot forward until your right heel lines up with the toes on your left foot. Once you’ve done the desired number of reps like this, repeat the process, but this time move your left foot forward until your left heel is lined up with the toes on your right foot. You’ve done one set when you’ve completed the desired number of reps using each stance.

The downside is that performing the hip thrust on one leg requires a lot of balance and coordination, which limits the amount of weight you can lift, and reduces the strength- and muscle-building potential of the exercise.

The Smith machine hip thrust probably isn’t quite as effective at developing your glutes as the barbell hip thrust, but it’s a workable hip thrust alternative if you don’t have access to a barbell, you’re working around an injury, or you simply don’t want to do the barbell version.

The banded hip thrust is a good alternative to the barbell hip thrust if you’re traveling or working out at home and don’t have access to a gym. To set up the banded hip thrust, sit on the floor with your back resting against a bench like you would for the barbell hip thrust, then lay a resistance band across your lap and pin each end of the band to the floor on either side of your body using something heavy (like weight plates or dumbbells). Then, perform the exercise the same way you would with a barbell.

If you want to maximize muscle growth, research shows that it’s best to train your muscles in different ways, from different directions, and at different angles.

Thus, a proper “hip thrust workout” should also include other exercises that train your glutes and other lower body muscles, like this

FAQ #1: What does the hip thrust work?

The main muscles worked in the hip thrust are the . . .

Provided you have a sturdy piece of furniture that you can rest your shoulders on, such as a bench, footstool, or ottoman, you can perform the hip thrust at home using a dumbbell, kettlebell, or resistance band.

FAQ #3: Are hip thrust before and after pictures you see online realistic?

Some of them might be, but most probably aren’t.

Many of the people that post hip thrust before and after pictures on social media and internet blogs use flattering poses, lighting legerdemain, and digital retouching to make their progress look more impressive than it actually is. (Simply pushing the glutes out and tilting the hips forward can make them look much bigger).

Oh, and given the seismic rise in cosmetic surgery over the past few decades, there’s also a good chance that many of the butts you see in the most striking “after” photos owe more to the plastic surgeon’s handiwork than the “influencer’s” #dedication in the gym.

FAQ #4: Hip Thrust vs. Squat: which is a better glute exercise?

Research shows that the squat is probably more effective for training your glutes than the hip thrust, especially if you use the low-bar position and squat to parallel or deeper (the point where your knees are roughly at the height of your hip crease).

That said, the hip thrust is still a highly effective glute exercise that trains your glutes in a slightly different way than most other glute exercises (including the squat), which is why you’ll get the best results if you include both exercises in your program.

FAQ #5: Hip thrust vs. Glute bridge: which is better?

The main benefits of the hip thrust are that it allows you to lift heavy weights safely and it’s easy to progressively overload (add weight and reps to), both of which make it an excellent exercise for building muscle and gaining strength.

On the other hand, the main benefits of the glute bridge are that it’s easy to learn and requires no equipment, which means it’s a viable hip thrust alternative if you’re new to weightlifting, working around an injury, or if you don’t have access to a gym.

FAQ #6: What’s the difference between the hip thrust and the “Bret Contreras hip thrust?”

He sometimes teaches a version of the hip thrust (referred to as the “Bret Contreras hip thrust” or “American hip thrust”) which involves doing a barbell hip thrust with your mid back resting on a bench, rather than your shoulders, and “tucking” your tailbone toward the ceiling at the top of each rep.

You can perform the hip thrust perfectly well using a barbell, dumbbell, or resistance band and a standard adjustable bench.

The post How to Do the Barbell Hip Thrust: Form, Mistakes & Alternatives appeared first on Legion Athletics.