To access the main road from his home high in the Himalayan mountains of the Indian state of Uttarakhand, Ram had to first climb down a mile of steep, unpaved, sloping path. From there, it was another 90 minutes on the main road to the village of Padampuri. That’s where the only government hospital and walk-in COVID-19 vaccination center in the Dhari area—home to some 30,000 people spread across 46 villages—is located.

It was early September, and India was still recovering from a devastating second COVID-19 wave, driven primarily by the Delta variant. According to official government figures, more than 400,000 Indians died between June 1, 2020, and July 1, 2021, but a recent report in the journal Science estimated that the true toll might have been as high as 3.2 million deaths. The majority of those—2.7 million—occurred in three months, April through June 2021. 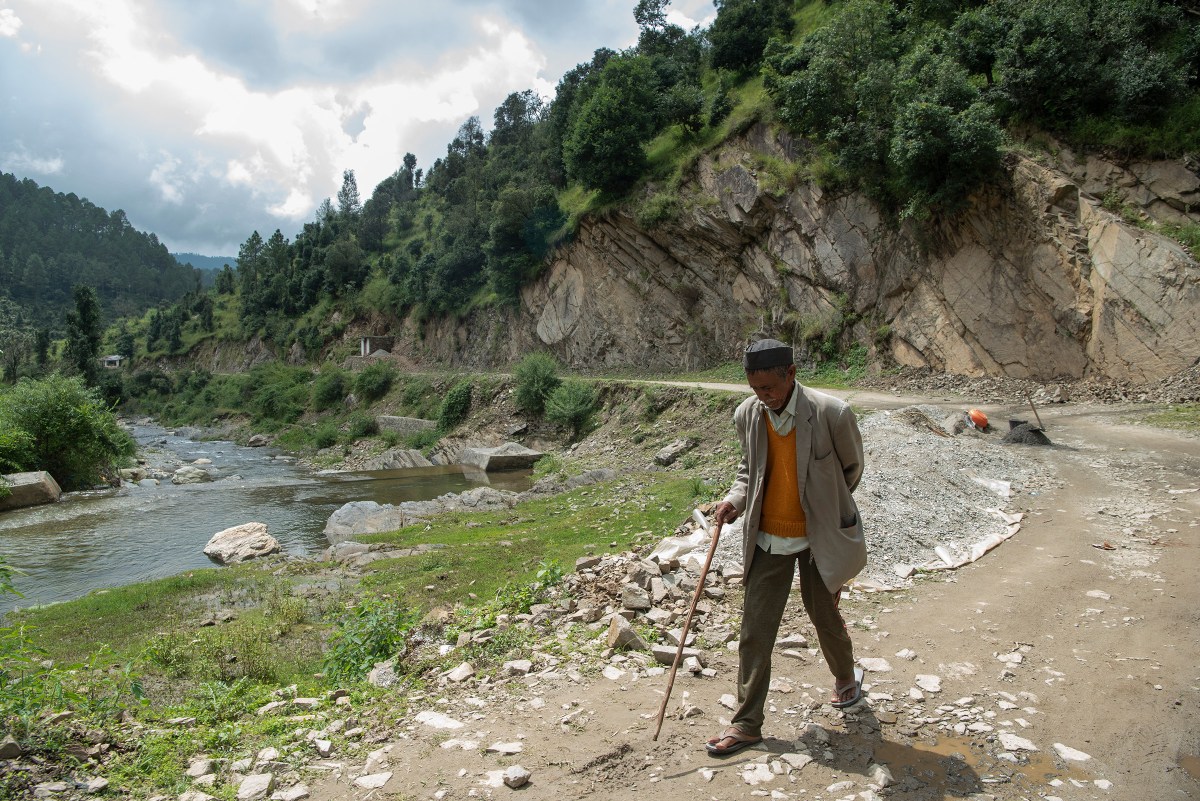 Saumya Khandelwal for TIMEJaikishan Ram, 77, treks back home after receiving a dose of the COVID-19 vaccine in Padampuri, India, on Sept. 3

In the following months, cases of COVID-19 dropped significantly, and hospitalizations remained relatively low even during an Omicron-driven third wave, which peaked in late January. This is in part thanks to nationwide efforts to stop the virus. India began rolling out COVID-19 vaccines in January 2021, starting with health workers, then for people over 50 and those with comorbidities. It took a while for the vaccine rollout to pick up pace, but by Jan. 30 of this year, India’s government said 75% of its adult population had received two doses of a COVID-19 vaccine.

Read More: How Did India’s COVID-19 Crisis Become a Catastrophe?

As a septuagenarian, Ram was eligible early on, but at first he stayed home. He’d been unwell and felt uncertain about the safety of the vaccines. He was also wary of the trip he’d have to take to get his shots. But months of persistence by the health workers in Padampuri—and especially by his daughter-in-law, who is part of Dhari’s vaccination team—managed to persuade him. “I saw how hard she worked on this,” Ram says. “She urged me to take the vaccine, if not for myself, then for my family and the community.”

His change of heart wasn’t unusual. Despite early concerns, in this isolated region that spans more than 30 sq. mi.—most of it rugged terrain that rises to 7,000 ft. of elevation—by the beginning of October, 100% of eligible adults had received a first dose of a COVID-19 vaccine. That equates to some 28,000 people, according to Himanshu Kandpal, the chief medical officer of the Dhari area, who is in charge of Padampuri’s medical center. The state of Uttarakhand as a whole reached that same milestone in mid-October, with all eligible adults—some 7.4 million people—receiving a first dose, usually of the Oxford-AstraZeneca vaccine, known locally as Covishield. (Those vaccinated in the very first phase typically received Covaxin, India’s own vaccine.)

While most Indian cities are now catching up, Dhari was an early success story, and continues to get people to show up—more recently, for their second doses and booster shots. As of the time of writing, over 80% of eligible adults in Dhari, one of the most remote places in the world, have received a second dose, despite heavy snowfall and road closures in hilly areas. Kandpal says that by the end of February, the adult population in the region will be fully vaccinated—though it’s difficult to be completely certain in a region where officials struggle to document the members of every household. All eligible teenagers of ages 15 to 17 have also received a first dose.

Other districts in the state have had similar success, as has India’s northernmost mountainous state of Himachal Pradesh. Indeed, the vaccination rate in Dhari and other hill districts far outstrips those of much richer places with better health infrastructure and where vaccines are widely and easily available. In the U.S., for example, 64.4% of adults have been fully vaccinated as of Feb. 14, while 75.9% have had a first dose.

How did a remote Himalayan region manage to succeed where so many other cities and countries have struggled? The answer underscores the value of health workers who are embedded in their communities and know how best to serve them in a crisis. 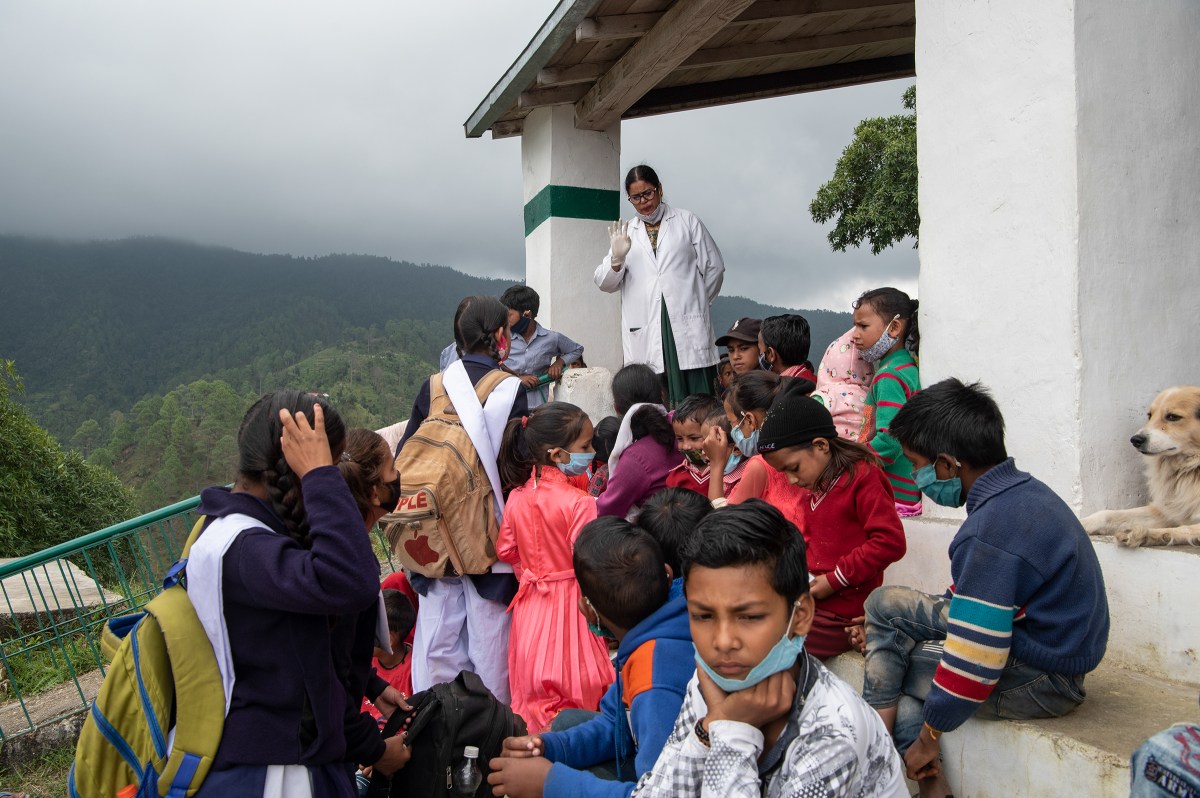 At first glance, Dhari seems an unlikely place to hit such a vaccine-success milestone. For one thing, the Indian government made a smartphone app the primary means for booking a vaccination appointment—in a country where only around half of the population has a smartphone. In rural areas like Dhari, that proportion is far lower.

Another challenge was simple practicality. “Much of the population here lives in remote areas, and it takes them so long to come to the medical center,” Kandpal told TIME in August, sitting in his office in Padampuri—the only significant medical facility for 25 miles. The building, covered in faded yellow paint, stands atop a mountain slope, approachable only by a long flight of steep stairs carved out of the mountainside. At about 5,200 ft. of elevation, it is thousands of feet below many of the mountain villages it serves. “People have to commit to a full day to get vaccinated. That didn’t help,” Kandpal said.

Hema Devi knows just how difficult that can be. In July, the 45-year-old farmer made the steep mile-long uphill trek from her home in the remote hamlet of Thiroli, to a vaccination camp in the bigger village of Dhanachuli. She waited for hours for her turn, before learning that the camp had just run out of vaccines. “I hear about people not taking the vaccines in the cities, and I am puzzled,” she says. “They don’t even have to climb a mountain or negotiate broken roads. They also don’t have to think of who’s going to cook dinner or lunch if they are stuck at the camp—they can just order food on the phone.”

On Aug. 2, she tried again, waking before dawn to cook, clean, and take her buffaloes and goats out to graze before setting off with her husband and two neighbors. When they arrived in Dhanachuli, Devi and her husband joined different lines to register for their shots. The line for men was much shorter, with most of them—including Devi’s husband—there to receive second doses, while most of the women had yet to receive their first.

That disparity has persisted across India, in part because of the difficulty in getting time away from housework and childcare. According to India’s official vaccination website CoWIN, as of Feb. 14, a total of 1.67 billion vaccine doses have been administered in India: 49.5% to women and 50.5% to men—a gap of some 38 million doses.

Indeed, when Devi’s husband received his first dose in July at the primary health care center in Padampuri around an hour’s drive away, she couldn’t go with him because of home responsibilities. “It would have taken the whole day, and who would have taken care of the children and the housework?” Even on the day Devi finally received her vaccine, she rushed home after registering at the camp, to cook lunch and tend to the livestock while her husband saved her spot. She sprinted back just in time for her shot. “I didn’t want to miss out this time too,” she says. “If we run out of vaccines, you never know when we will get it next.” 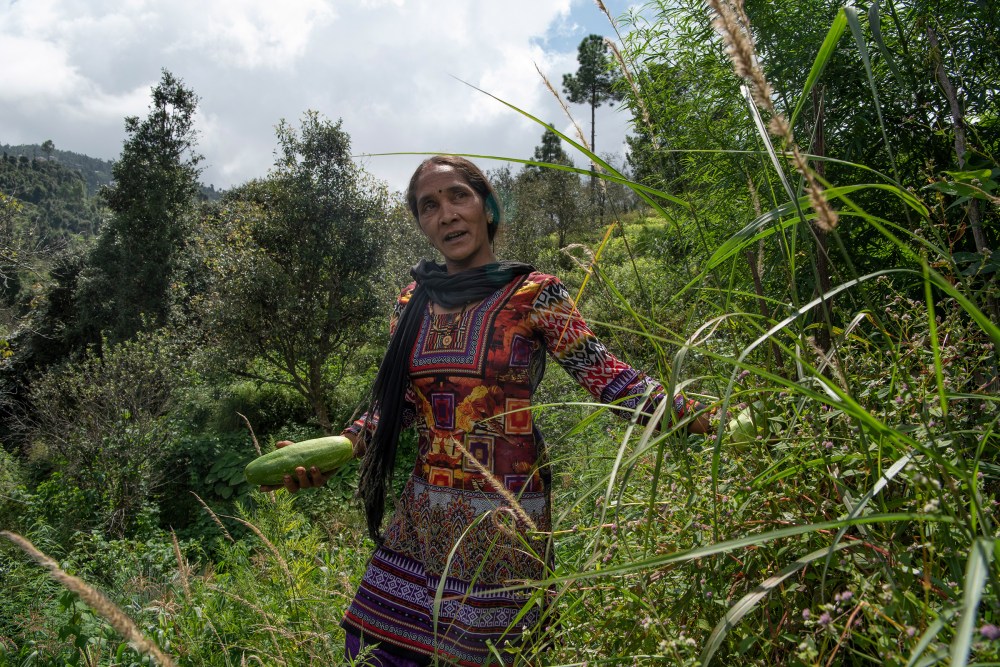 Saumya Khandelwal for TIMEHema Devi walks around her farm in Thiroli

Devi wasn’t always so eager to get the vaccine. Like many Dhari residents interviewed by TIME, she was initially scared. “We heard stories of infertility and deaths,” she says. “But then we saw people taking it and they were OK. Also the health workers came to the village and explained and encouraged us. They are one of us, so we trust them.”

Crucially, these workers have history on their side. The health care workers in Dhari are mostly local women who have been trained to act as educators in their communities through work as accredited social health activists (ASHAs) or hired by the government as nurse-midwives (ANMs) to act as the first point of contact between the community and the public health care system. Across India, especially in rural areas, these community workers have played a crucial role in the pandemic, creating awareness about the virus, tracking and monitoring cases, and then rolling out the vaccination program. In Dhari, this well-earned trust led locals to buy into the idea that they needed to get vaccinated to protect themselves and their families against COVID-19—even if it meant trekking hours through steep terrain.