Home Births Became More Popular During the Pandemic. But Many Insurers Still Don’t Cover Them

Tia DeShazor began to question whether she wanted to give birth in a hospital when she was about six months pregnant. It was winter 2021 and COVID-19 was still raging through New York City, where she lives. Pandemic restrictions prevented her husband from attending doctors’ appointments with her, and she wasn’t even allowed to video chat with him during her ultrasound. She felt ignored by her doctors, who assured her that her round ligament pain was normal, even though it was so severe that she had difficulty walking.

And she knew about the disproportionate risks to Black women, like her, who give birth in U.S. hospitals. If tennis great Serena Williams had nearly died in childbirth after hospital staff initially dismissed her concerns, she believed the same could happen to her. “They’re not listening to me,” she remembers thinking. “I don’t want to be in labor, and be concerned about something, and be dismissed at an even more vulnerable time.”
[time-brightcove not-tgx=”true”]

So DeShazor decided to have a home birth. But she was unable to find a midwife who could deliver her baby at home who was in network with her insurer, MetroPlus, and the Medicaid plan they operate for New York City residents including her. She’d need to hire an out-of-network midwife—but her insurer told her that her Medicaid plan wouldn’t cover one, DeShazor says. (MetroPlus did not reply to a request for comment about their coverage policies for home births.) DeShazor and her husband scrambled to get together the $9,000 they’d need for the birth, prenatal, and postpartum care—by asking friends and family for donations on their baby registry, applying to a scholarship fund for home births, and gradually paying for the rest. She counts herself lucky to have a supportive partner and community to make it happen, and she gave birth to a healthy baby in May 2021. “No one wants to worry about paying for bringing their first child into the world,” DeShazor says. “That’s what insurance is supposed to be for.”

The vast majority of births in the U.S.—98%—happen in hospitals. But even though home births account for only a tiny slice, they have become more popular during the pandemic. The percentage of births at home in the U.S. rose from 1.03% in 2019 to 1.26% in 2020, according to a report published by the U.S. Centers for Disease Control and Prevention in Dec. 2021—a 22% increase. The rise has been especially steep for women of color, like DeShazor, who want to avoid potential risky outcomes in the medical setting that befall people of color more often than they do white patients. From March 2020 until December 2020, the number of Black mothers giving birth at home surged, according to the new report, from 0.5% to 0.68%—a 36% increase.

But home births come with surprise costs for many new parents. Even though the average home birth in the U.S. costs much less than the average hospital birth using employee-sponsored insurance—$4,650 in total payments from insurers plus individuals, compared to $13,811, respectively, the sum of what is paid by insurers and families—major insurers often deny claims to fully cover home births, as well as the prenatal and postnatal care that accompany them. Katherine Baker, who handles billing for midwives based mainly in New York, says that in her experience, about 90% of insurance coverage decisions for home births require appeals to try to secure coverage, and the issue seems to be getting worse. “The fact that insurance companies like UnitedHealthcare and Aetna have policies in place to keep women from obtaining coverage for home birth has become a major women’s health issue, especially during this pandemic,” says Baker. 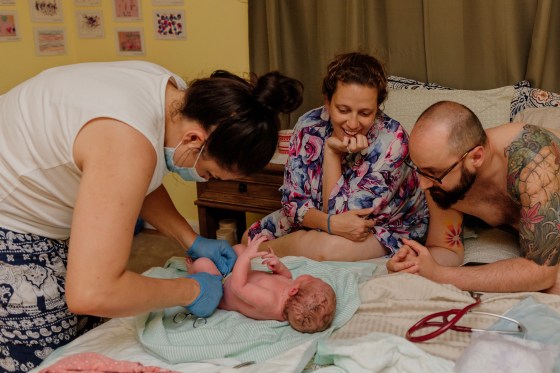 One of the primary reasons families choose to give birth at home is that they believe it’s safer than doing so at a hospital. In a 2010 survey of 160 women who had delivered babies at home, the most common reasons they gave for choosing home births were safety, avoiding unnecessary interventions, and having a negative past birth experience at a hospital (or knowing someone who had). Reasons like these are especially likely to push women of color toward home births: in the U.S., women who identify as Black, American Indian/Alaska Native are two to three times as likely to die from pregnancy-related causes as white women, according to a 2019 report by the CDC. Experts attribute the disparities to unequal access to quality healthcare, structural racism, and disproportionate risk of chronic conditions, among other factors.

Having one-on-one attention from a midwife who understands that Black mothers face greater risks and how to mitigate them puts Black mothers more at ease, says Nubia Earth Martin, a founder of Birth From The Earth, which provides childbirth education and midwifery care for Black women in New York. Martin says she’s seen growing interest in home birth among Black women, both before and during the pandemic, “because of the maternal mortality, morbidity, and race disparities.” Martin says that in recent months, more and more families have been applying to a home-birth financial-assistance fund she helped establish in March 2020, which so far has provided funds to about 50 families.

Read More: Death Doulas Used to Be Rare. The COVID-19 Pandemic Changed That

Concerns about the pandemic have nudged many women to consider home births. Some decided to give birth at home to avoid potential exposures to the virus; cumbersome restrictions like wearing a mask during labor and delivery; and limits to the number of visitors they could have. Others feared that they might be separated from their babies if they tested positive for COVID-19, which the American Academy of Pediatrics (AAP) recommended earlier in the pandemic before altering guidelines in July 2020 to say that infected mothers and their infants can share a room if they take precautions.

Ivy Torres, a 34-year-old New York nurse who previously worked in labor and delivery, said that the pandemic reinforced her decision to give birth at home to her second child in May 2020. Torres said that she feared testing positive for COVID-19 after her birth, which would separate her from her newborn per hospital policies. “At that point, they were very stringent with the amount of contact you would then have with your baby.” There were no such rules at home; however, Torres’ family largely had to pay for the birth themselves. Her insurer, UnitedHealthcare, only paid about $700 for prenatal, postpartum and birth care, Torres says—and she was on the hook for the remaining $7,500.

Many insurance companies either don’t cover the bulk of costs associated with home births or do not cover home births at all. This, some say, is because scientific and professional organizations hold that hospitals are safer. The American College of Obstetricians and Gynecologists (ACOG), which sets guidelines for health care professionals in the field, and the AAP both say that hospitals and accredited birth centers are the safest place to give birth. Aetna cited these guidelines as the reason for not covering home birth costs. (However, ACOG adds that “each woman has the right to make a medically informed decision about delivery,” and the AAP provides guidance for home births.)

Despite the current guidelines set by professional societies, the question of whether at-home births are significantly more risky remains under debate by experts. Some research suggests that planned home births can be done safely, and may even provide some benefits for mothers. Saraswathi Vedam, professor of midwifery at the University of British Columbia, says that more research is necessary to understand the cultural and social benefits of home births. “Birth is a physiologic process, so if you feel afraid and tense, that’s going to carry over into the course of your labor,” says Vedam. “We’re just starting to understand the different connections between cultural safety, racial safety, and anti-oppression care with how it affects the body.”

Families across the country with many different insurance plans face barriers to coverage and reimbursement for home births, says Indra Lusero, an attorney and director of the Elephant Circle, an advocacy organization focused on birth and reproductive justice. Dealing with insurers is a consistent problem for midwives, who often need to hire professional billers to deal with the hassle of negotiating with insurers. “I’ve heard from people all across the country—all kinds of scenarios, all kinds of insurance—that there will be some barrier to getting coverage or reimbursement for home birth with a midwife,” says Lusero. “There’s a broad culture of anti-home birth in the insurance industry in general.” Although coverage varies by state and insurer, in some states, midwives who deliver babies at home are typically out-of-network with insurance companies. That is often by choice, because reimbursement is capped as low as $2,000 for delivery services and months of prenatal care that Lusero says are worth about $9,500—even though coverage for hospital births can be much more expensive. When families try to get their claims approved retroactively by their insurer, Lusero says they’re often denied for seemingly random reasons. “I still, after all these years, do not understand what accounts for the arbitrariness,” Lusero says. “It’s a whack-a-mole situation.”

This leaves parents in a difficult position: to pay the remaining bill themselves, or to contest the decision. Much of the responsibility often falls to postpartum mothers, who, if they were to fight for reimbursement, would have to balance all the effort that entails with caring for an infant and other responsibilities. “There were just many, many steps. And every time I came to the next step, there was another ‘no’ and a block,” says Caryn Davis, 39, who says she is still appealing Aetna a year and a half after giving birth to her child in New York; the company provided less than $1,000 for her birth, she says. “I can’t tell you how many times I’ve been on the phone with them for over two hours or more.”

Despite the financial frustration, DeShazor, Torres, and Davis don’t regret their home births. DeShazor says it was all worth it to give birth to her baby, Lexington, in her own bed, with her doula, midwife, husband, and two best friends by her side. “It’s intense to give birth. But I feel like it would have been more intense if I were not feeling safe or heard,” she says. “It was a very communal experience to bring my child into the world, instead of one that’s fearful.”