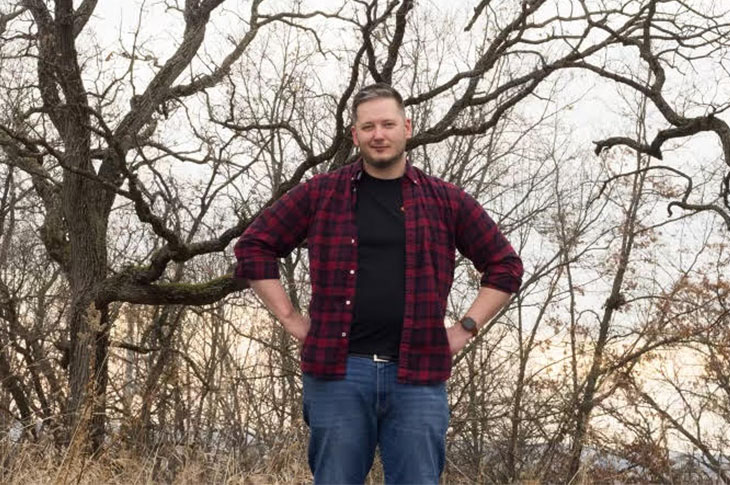 This last Fourth of July, I had plans to visit a nearby Japanese Zen garden with my girlfriend. I woke up that morning feeling OK, but after a shower and a cup of coffee, I started noticing that I was a little out of breath and feeling some pain in my chest. I looked at my Fitbit, and it said my heart rate was 124 beats per minute. That was unusual because I wasn’t exercising and just getting my day started.

When we got to the Zen garden, I tried to sit down and rest to see if I could lower my heart rate, but it stayed elevated, and I couldn’t figure out what was going on. There I was in a Zen garden where you are supposed to find calm and peace, and I couldn’t get my heart to stop racing. Initially, I thought I’d go to the hospital if I was still feeling the same the next day. If I didn’t have the data from my Fitbit, I might have done that. That would have been a bad decision.

I’m 35 years old and until that day last July, I’ve never had a problem with my health. I’ve always been pretty active. I started in the military right after high school and served a nine-month combat tour in Iraq in 2008 as an MRAP driver. For those who don’t know, an MRAP is a 40,000-pound six-wheeled, mine-resistant truck. We delivered supplies to forward operating bases and food and water to the locals. At the time, it was a very dangerous place.

When you are young, you feel indestructible, but I’ve noticed that when soldiers get out of the military, they sometimes let their health slip. When you are on active duty, you have someone making you do physical training every day, but when you are out, it’s all up to your own sense of motivation. I survived my time in a combat zone, but it is just as important to care for yourself when you get back home. That is why I got the Fitbit Versa and encourage the friends I knew in the military to get one too. It helps you set goals and stay motivated. I didn’t think it would help save my life.

That day in the Zen garden, I finally came to my senses and had my girlfriend drive me to the hospital. Something was up with my heart, and you don’t want to mess around with that.

At the hospital, I explained my symptoms and showed them my heart rate graph. That data made it really clear that something serious was going on. They quickly discovered that I had a pulmonary embolism. A clot was blocking blood flow near my heart. They put me on medication to lower my blood pressure and keep more clots from forming. Once they had me stabilized, they inserted a catheter through a vein in my leg to find and remove the clot.

I’m entirely recovered now. I’m back at work in my post-military career as a machine builder. I track my heart rate and Active Zone Minutes with my Fitbit as I hike, bike, and work out at the gym. I remind all the vets I know that you have to do your daily PT even if no one is ordering you to do it.

Talking with my doctors after my procedure, they told me that Fitbit helped save my life. They believe that if I hadn’t gotten to the hospital that day, I would have likely died. I’m grateful to have such a useful tool.

By Michael Shula as told to Ethan Watters

The post Find Out How Michael Shula’s Fitbit Helped Him to Survive a Serious Heart Issue appeared first on Fitbit Blog.