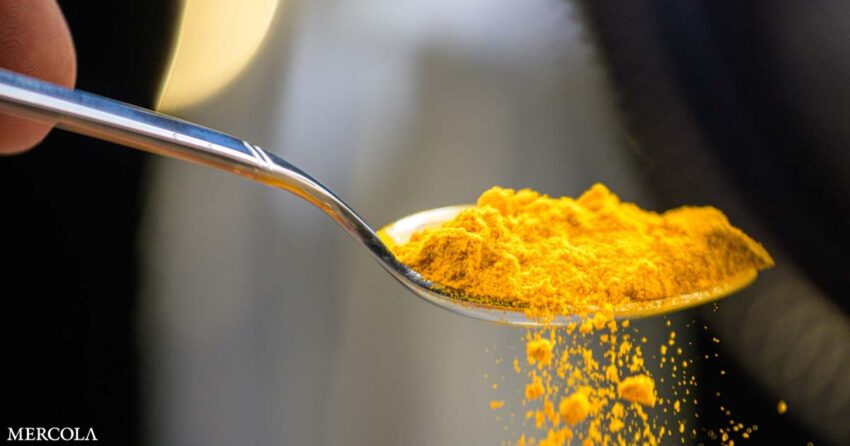 Research published by the University of California-Riverside1 has found that curcumin, a compound found in the spice turmeric, promotes vascular tissue growth.2 This discovery is significant as it may eventually be used to help regenerate injured tissue or heal chronic wounds.

Nearly 2.5% of the U.S. experiences chronic wounds according to 2020 estimates.3 An analysis4 of Medicare data in 2018 identified roughly 8.2 million people with chronic wounds that may or may not have been infected.

The estimated cost of treatment ranged from $28.2 billion to $96.8 billion. The highest cost was associated with surgical wounds, followed closely by diabetic foot ulcers, both of which would greatly benefit from improvements in vascular tissue growth.

Curcumin is a polyphenol pigment from the turmeric root that has been used for centuries in medicinal preparations, cooking and food coloring.5 The turmeric plant is in the ginger family and native to Southeast Asia.6 It is a rhizome that has been traditionally used in Ayurveda and other Indian medical systems, as well as traditional Chinese medicine.

Turmeric is known to have an effect7 in the management of inflammatory and oxidative conditions such as arthritis, hyperlipidemia, metabolic syndrome and anxiety. However, on its own, curcumin is poorly absorbed, and rapidly metabolized and eliminated. Bioavailability can be improved by 2,000% when it is consumed with piperine, which is the major component of black pepper.8

There’s also mounting evidence that curcumin can modulate several different molecular targets that may have anticancer and neuroprotective activities.9 It is important to take care when using oral supplements with other medications since they may affect the toxicity of a wide range of drugs when they are taken together.

As researchers from the University of California noted in a press release,10 curcumin has demonstrated the ability to suppress cell growth in malignant tumors.11 This has been found in several types of cancer, such as small cell lung cancer,12 breast cancer,13 pancreatic cancer14 and ovarian cancer.15

One study looked at the solubility and stability of curcumin in water and theorized that it could be enhanced using selective nanotechnology-based formulations.16 The current research was built on hyaluronic acid hydrogels, which earlier research17 showed were highly stable, even after being injected through a fine clinical needle or undergoing sterilization.

Additionally, they showed good biocompatibility in lab testing. Other researchers have characterized hyaluronic acid (HA) as:

“… one of nature’s most versatile and fascinating macromolecules. Being an essential component of the natural extracellular matrix (ECM), HA plays an important role in a variety of biological processes.”

In this study, the researchers synthesized curcumin magnetic nanoparticles that were then dispersed in a hyaluronic acid hydrogel. Initially, the researchers tested the curcumin in hydrogel against stem cell cultures and found it promoted vascular endothelial growth factor (VEGF) and vascular tissue growth.18

This is an interesting finding since VEGF is a potent angiogenic factor that is upregulated in tumors, contributing to tumor growth.19 However, as has been demonstrated in the past, curcumin has the opposite effect in malignant tumors, where it inhibits angiogenesis.20

The magnetic properties of the curcumin nanoparticles in the featured study allowed the scientist to direct the movement of the nanoparticles to the desired location21 after placing the curcumin hydrogel in a tube behind fresh pig tissue, which acts similarly to human tissue. Researchers then use a magnet to direct the movement, which has suggested the method may be used as a delivery system to help heal injured tissue.

One of the researchers commented on the potential for this delivery system, saying,22 “Our study shows that curcumin released from magnetic hydrogels promotes the cells to secrete VEGF, which is one of the most critical growth factors to enhance the formation of new blood vessels.” The researchers concluded:23

“The HyA_CMNP (hyaluronic acid hydrogel curcumin magnetic nanoparticle) group also showed the highest secretion of the vascular endothelial growth factor with the release of curcumin in vitro. Overall, our magnetic hydrogels integrated the desirable properties of cytocompatibility and angiogenesis with magnetic guidance, thus proving to be promising for improving tissue regeneration.”

Curcumin has also been studied in controlling pain, including after surgery. One study24 looked at patient-reported outcomes after laparoscopic cholecystectomy when patients were given either curcumin or a placebo and a rescue analgesic at discharge.

Despite issues with bioavailability, patients taking the curcumin demonstrated better mean pain scores during weeks 1 and 2 after surgery and better fatigue scores in the first three weeks. After surgery, up to 30% of patients may continue to experience persistent acute pain, despite advancements in regional anesthesia and pain control.25

On the other hand, it appeared that treatment with curcumin preoperatively did not affect postoperative pain and recovery.28 Burn pain is another area in which curcumin appears to have a therapeutic effect. Currently, opioids, nonsteroidal anti-inflammatory drugs (NSAIDs), anticonvulsants and antidepressants are the common form of medications used to control pain.29

However, as has been demonstrated in the past decades with a rising epidemic of opioid deaths30 and lists of side effects from antidepressants31 and NSAIDs,32 these drugs can have serious side effects. Evidence suggests that curcumin not only can help with controlling pain, but also can improve wound healing, especially as emphasis is placed on developing a delivery system that improves bioavailability.33

Work34 has also demonstrated that curcumin may play an effective and potentially essential role in the treatment of pathological pain. These pain conditions may be triggered by peripheral nerve damage or inflammation and have a poor history of relief with current therapeutic options.

Eye conditions can be very difficult to deal with as they may affect your sight and are sometimes painful. Anterior uveitis35 is a condition that can result from trauma to the eye or is associated with other health conditions such as tuberculosis, rheumatoid arthritis and viral infections. In some cases, there is no obvious underlying cause.

In one study,36 patients with chronic anterior uveitis received a 375-milligram dose of curcumin three times a day for 12 weeks. There were 32 patients who completed the 12-week study, which showed curcumin was effective in reducing symptoms and recurrences in the following three years.

In 2014, one paper37 noted that past research had not shown any dose-limiting toxicity with curcumin when it was administered at up to 8 grams each day for 3 months. They also noted that curcumin had shown beneficial effects on other ocular diseases, such as glaucoma, diabetic retinopathy, dry eye syndrome and age-related macular degeneration.

The researchers found that the animals receiving curcumin performed significantly better than those who did not. They believe the results show that curcumin helped mitigate the cognitive impairment associated with a decrease in brain cell proliferation and neuroblast differentiation.

Several papers have suggested that there is mounting evidence that curcumin may play a role in the prevention and treatment of other neurodegenerative diseases, such as Alzheimer’s disease,41 Parkinson’s disease42 and memory impairment without dementia.43 Other brain disorders that have been positively affected by the administration of curcumin include multiple sclerosis, Huntington’s disease, stroke, autism and amyotrophic lateral sclerosis (ALS).44

The neuroprotective effects are related to passing the blood-brain barrier. This has become increasingly important in the last couple years since the start of the pandemic. In 2019, 11% of adults reported they had symptoms of depression or anxiety from January to June 2019. That number rose dramatically in January 2021 when 41.1% of adults reported symptoms.45

According to the Anxiety and Depression Association of America,46 anxiety disorders are one of the most common mental illnesses and may develop from a complex set of risk factors. One meta-analysis47 of six short-term, placebo-controlled clinical trials showed that curcumin “appears to be safe, well-tolerated and efficacious among depressed patients,” and could serve as a “novel antidepressant.”

Treatment groups received either 250mg, 500 mg or 250 mg of curcumin with 15 mg of saffron. Interestingly, there was no difference in the effectiveness between the 250 mg and 500 mg doses, and curcumin was most effective in atypical depression.

The researchers also suggested that curcumin holds potential as a treatment in post-traumatic stress disorder (PTSD), bipolar disorder, psychotic disorders, autism and obsessive-compulsive disorder. One of the mechanisms that may be behind these biological effects is the anti-inflammatory properties of curcumin.

Chronic low-grade inflammation is a hallmark and contributing factor in many significant and chronic diseases. The authors of one study noted:51

“Elevated biomarkers of inflammation … have been found in depressed patients, and administration of inflammatory stimuli has been associated with the development of depressive symptoms.

Data also have demonstrated that inflammatory cytokines can interact with multiple pathways known to be involved in the development of depression, including monoamine metabolism, neuroendocrine function, synaptic plasticity and neurocircuits relevant to mood regulation …”

I believe that controlling inflammation is best done through lifestyle changes and not succumbing to the siren song of Big Pharma’s promise that drugs solve all your health conditions. The problem with this approach is that most drugs have side effects, and your physician will likely prescribe more drugs to treat the side effects, which in turn have side effects of their own.

Fortunately, you don’t need drugs to combat inflammation. One of the most effective ways to lower your inflammatory response is to eat a cyclical ketogenic diet.52 Another important strategy is to have optimal levels of vitamin D53 and omega-3.54 Yet another crucial contributor is to reduce your exposure to EMFs,55 which you do by keeping your cell phone in airplane mode unless you’re using it and never holding it against your ear.

Evidence also demonstrates that there is a significant link between your gut inflammation and your brain specifically related to dysfunction in the gut-brain axis.56 This problem is largely driven by lifestyle factors that influence your gut microbiome. This is one of the reasons that sugar is so detrimental to your mental health because it triggers a cascade of chemical reactions that promote chronic inflammation.57

You can address your gut health by regularly “reseeding” your gut with beneficial bacteria using probiotics and feeding those beneficial bacteria with prebiotics. If you do not eat fermented food, taking a high-quality probiotic supplement makes sense, along with getting plenty of fiber in your diet.