In the past week, the Biden administration launched two programs that aim to get rapid covid tests into the hands of every American. But the design of both efforts disadvantages people who already face the greatest barriers to testing.

From the limit placed on test orders to the languages available on websites, the programs stand to leave out many people who don’t speak English or don’t have internet access, as well as those who live in multifamily households. All these barriers are more common for non-white Americans, who have also been hit hardest by covid. The White House told KHN it will address these problems but did not give specifics.

It launched a federally run website on Jan. 18 where people can order free tests sent directly to their homes. But there is a four-test limit per household. Many homes could quickly exceed their allotments — more than a third of Hispanic Americans plus about a quarter of Asian and Black Americans live in households with at least five residents, according to an analysis of Census Bureau data by KFF. Only 17% of white Americans live in these larger groups.

“There are challenges that they have to work on for sure,” said Dr. Georges Benjamin, executive director of the American Public Health Association.

When the federal website — with orders fulfilled and shipped through the United States Postal Service — went live this week, the first wave of sign-ups exposed serious issues.

Some people who live in multifamily residences, such as condos, dorms, and houses sectioned off into apartments, reported on social media that if one resident had already ordered tests to their address, the website didn’t allow for a second person to place an order.

“They’re going to have to figure out how to resolve it when you have multiple families living in the same dwelling and each member of the family needs at least one test. I don’t know the answer to that yet,” Benjamin said.

USPS spokesperson David Partenheimer said that while this seems to be a problem for only a small share of orders, people who encounter the issue should file a service request or contact the help desk at 1-800-ASK-USPS.

A White House official said 20% of shipments will be directed every day to people who live in vulnerable ZIP codes, as determined by the Centers for Disease Control and Prevention’s social vulnerability index, which identifies communities most in need of resources.

Another potential obstacle: Currently, only those with access to the internet can order the free rapid tests directly to their homes. Although some people can access the website on smartphones, the online-only access could still exclude millions of Americans: 27% of Native American households and 20% of Black households don’t have an internet subscription, according to a KHN analysis of Census Bureau data.

The federal website is currently available only in English, Spanish, and Chinese.

According to the White House, a phone line is also being launched to ease these types of issues. An aide said it is expected to be up and running by Jan. 21. But details are pending about the hours it will operate and whether translators will be available for people who don’t speak English.

However, the website is reaching one group left behind in the initial vaccine rollout: blind and low-vision Americans who use screen-reading technology. Jared Smith, associate director of WebAIM, a nonprofit web accessibility organization, said the federal site “is very accessible. I see only a very few minor nitpicky things I might tweak.”

The Biden administration emphasized that people have options beyond the rapid-testing website. There are free federal testing locations, for instance, as well as testing capacity at homeless shelters and other congregate settings.

Many Americans with private health plans could get help with the cost of tests from the Biden administration reimbursement directive. In the days since its unveiling, insurers said they have moved quickly to implement the federal requirements. But the new systems have proved difficult to navigate. 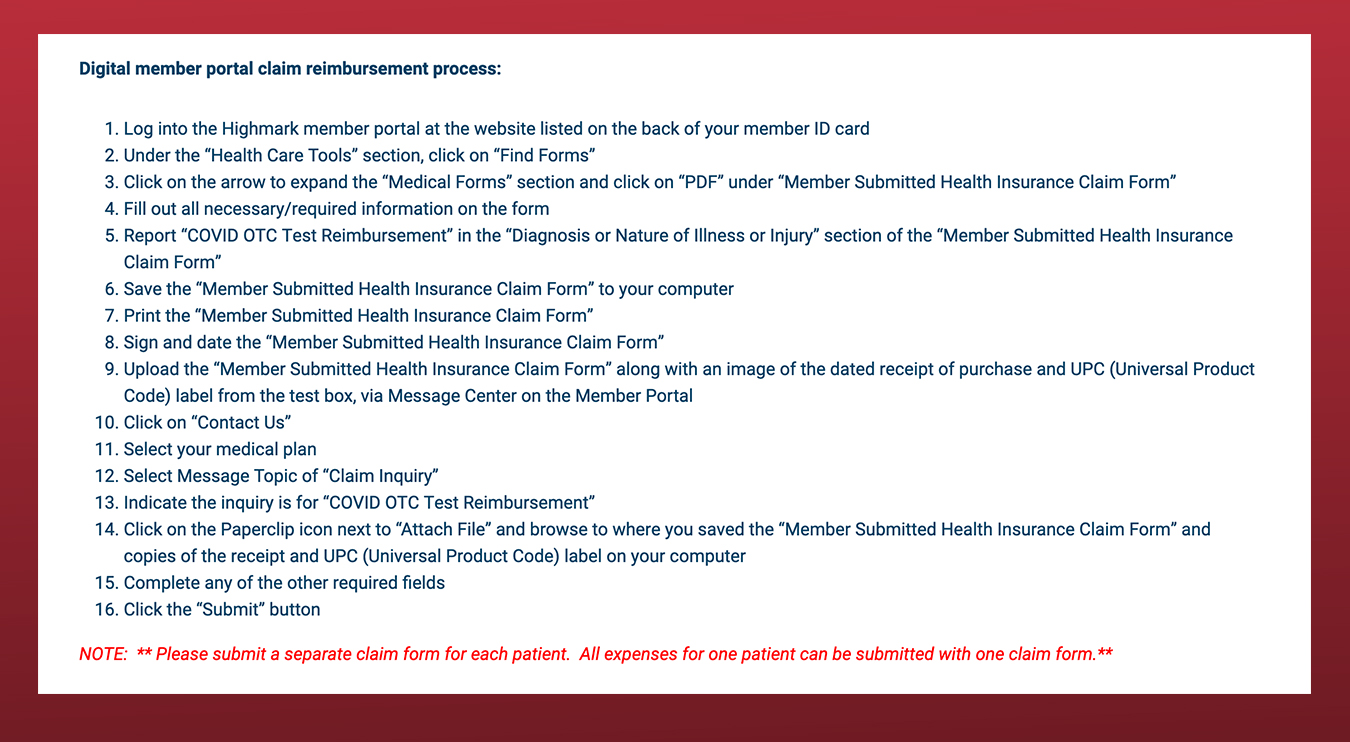 Consumers can obtain rapid tests — up to eight a month are covered — at retail stores and pharmacies. If the store is part of their health plan’s rapid-test network, the test is free. If not, they can buy it and seek reimbursement.

The program does not cover the 61 million beneficiaries who get health care through Medicare, or the estimated 31 million people who are uninsured. Medicaid and the Children’s Health Insurance Program are required to cover at-home rapid tests, but rules for those programs vary by state.

And the steps involved are complicated.

First, consumers must figure out which retailers are partnering with their health plans and then pick up the tests at the pharmacy counter. As of Jan. 19, however, only a few insurance companies had set up that direct-purchase option — and nearly all the major participating pharmacies were sold out of eligible rapid tests.

Instead, Americans are left to track down and buy rapid tests on their own and then send receipts to their insurance providers.

Many of the country’s largest insurance companies provide paper forms that customers must print, fill out, and mail along with a receipt and copy of the box’s product code. Only a few, including UnitedHealthcare and Anthem, have online submission options. Highmark, one of the largest Blue Cross and Blue Shield affiliates, for instance, has 16-step instructions for its online submission process that involves printing out a PDF form, signing it, and scanning and uploading it to its portal.

Nearly 1 in 4 households don’t own a desktop or laptop computer, according to the Census Bureau. Half of U.S. households where no adults speak English don’t have computers.

A KHN reporter checked the websites of several top private insurers and didn’t find information from any of them on alternatives for customers who don’t have computers, don’t speak English, or are unable to access the forms due to disabilities.

UnitedHealthcare and CareFirst spokespeople said that members can call their customer service lines for help with translation or submitting receipts. Several other major insurance companies did not respond to questions.

Once people make it through the submission process, the waiting begins. A month or more after a claim is processed, most insurers send a check in the mail covering the costs.

And that leads to another wrinkle. Not everyone can easily deposit a check. About 1 in 7 Black and 1 in 8 Hispanic households don’t have checking or savings accounts, compared with 1 in 40 white households, according to a federal report. Disabled Americans are also especially likely to be “unbanked.” They would have to pay high fees at check-cashing shops to claim their money.

“It’s critically important that we are getting testing out, but there are limitations with this program,” said Dr. Utibe Essein, an assistant professor of medicine at the University of Pittsburgh School of Medicine. “These challenges around getting tests to individuals with language barriers or who are homeless are sadly the same drivers of disparities that we see with other health conditions.”